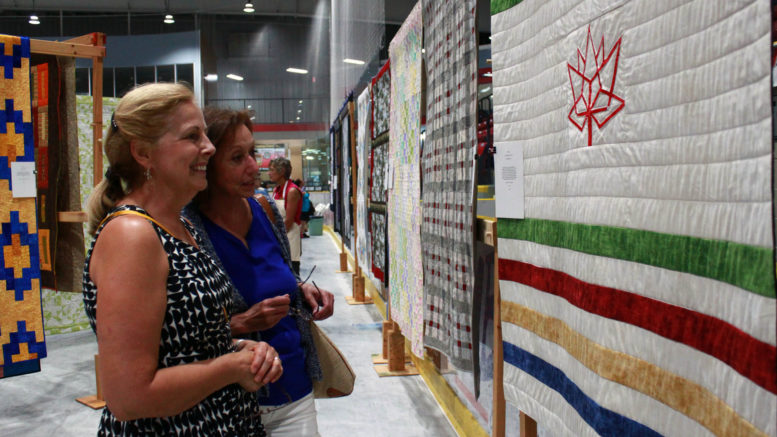 Marie Newman and Susan Petroff explore some quilts at the Wellington and District Community Centre on Saturday. (Chad Ibbotson/Gazette staff)

Suzanne Burton was visiting the show from Ottawa when she spoke with the Gazette. She said she attended two years ago with her husband and the pair often take trips to the county to take advantage of various festivals and events.

A quilter herself, Burton said she was impressed with this year’s show.

“It’s gorgeous, I belong to an Ottawa guild and there’s a lot of hand-quilted (items) here — more than in our guild,” she said. “You might see the occasional one, but I’ve noticed a lot of hand quilting here and I appreciate that skill.”

She said she also enjoyed perusing vendors’ tables and exploring what was for sale.

PECGQ president and 2018 quilt show chair Janet Reader Day said it was another successful year for the show, which took place at the Wellington and District Community Centre.

“It was fantabulous,” she laughed. “We had lots of quilts, we filled the arena with quilts — everybody seemed to like the layout and how light and airy the room is, they could view the quilts from all directions.”

More than 300 quilted items were featured as well as more than a dozen vendors offering a one-stop-shop for all quilting needs.

“You don’t have to go to one store to get this and then say go to Kingston to get something else, you can just walk around in that maze of vendors and find what you need right then and there,” she said.

All of the quilts on display were created by guild members since the 2016 show with only the three big winners from that year returning in 2018. The displayed quilts represented the work of 71 active members and 54 of those members had their quilt judged by NQA-certified quilt judge Bethany Garner.

“There was a variety of quilts for everyone to see from traditional to funky wall art abstract things,” she said. 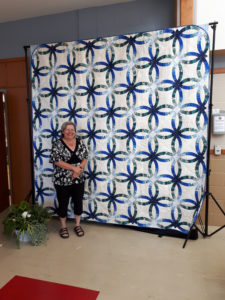 Demorestville resident Pattie Quaiff won the hand-quilted raffle prize “Double Wedding Rings of Blue” quilt. Tickets for the raffle went on sale at the 2017 Picton Fair and subsequent local events. All 5,000 printed tickets for the raffle sold out before the show’s end on Sunday. Half the proceeds from the raffle support the guild while the other half is split between educational activities and local charities.

“We decide at the first executive meeting in September which charities we’re going to give half of that to and then next year we do the same thing,” said Reader Day.

The title for best in show went to Lee Waterhouse for her “True Patriot Love” quilt. Bill Stearman’s entry “My Left Brain” won the viewer’s choice award in the bed quilt category while Ann Fales’ piece “Northern Reflection” won viewer’s choice in the wall quilt category.
A gift basket was won by D’thea Webster of Kaladar, Ont. while the in-house draw for a Mary Pease quilt was won by PECQG member Lyne Lusk.