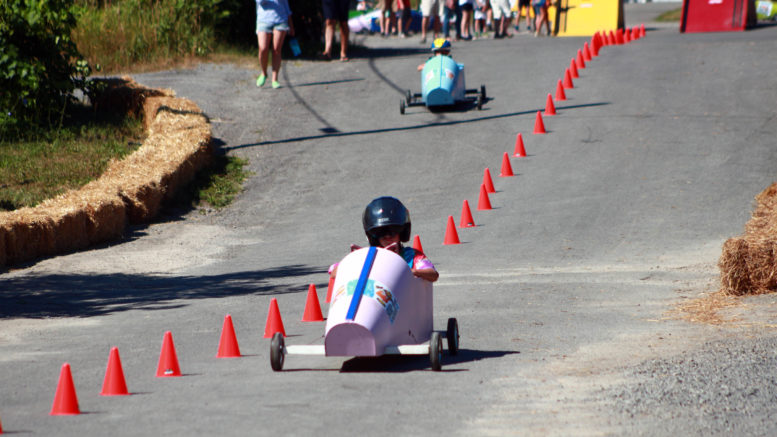 Leo Hynes falls behind Liam Ackerman in their race down the hill Saturday. (Chad Ibbotson/Gazette staff)

By all accounts it was a successful first year for the South Marysburgh Soap Box Derby.

The races kicked off Saturday morning and saw about 38 young drivers take the wheel to battle for the fastest time. South Marysburgh recreation committee member and lead organizer Helen Ward said the committee was approached by Consecon’s Nick Nowitski with the idea and they ran with it.

“We did a call for volunteers and it’s amazing, I’m absolutely flabbergasted at the great turnout,” she said of the volunteer support. “That’s the hardest part of doing anything is finding volunteers.”

“This has been our first attempt to reach out to our younger population and their parents to show that we do have a committee here and we are interested in putting things together,” Ward said. “We just need the ideas and we need the volunteers, participation doesn’t seem to be a problem.”

“The biggest thing for me is that it’s really been heartwarming to see the amount of people that are willing to participate,” she said.

In addition to prizes for first, second, and third place, each driver received a participation medal. Organizers also had food including ice cream and other treats, a bouncy castle, and face painting. It was all part of the effort to offer local children some outdoor summer fun, said recreation committee member Kathy Empringham.

“It’s vital to a community’s growth and vitality,” she said.

Ward said organizers plan to bring the derby back again next year.

“It engages the little kids in the surrounding area, it gets their parents out and understanding what the rec committee does and, through that, hopefully some other people will volunteer and we can plan other events,” he said.
He said it was an impressive turnout for the event’s first year. He commended Nowitski for helping get the event off the ground.

Nowitski who, with the support of the Ameliasburgh recreation committee has been one of the driving forces behind Consecon’s growing soap box derby, has been trying to drum up support for a soap box derby circuit in the county over the last few years. South Marysburgh was the first to come on board. He was volunteering Saturday, getting the cars in place and dropping the starting line gate. Eight cars and helmets from Consecon were also loaned to South Marysburgh for the first-year event.

He said the biggest challenge is getting volunteers on board and knowing there is a team who will help host the events each year.

“If we can get one in the south, we’ve got one in the west, if we get one in the east and run three over the summer, that wouldn’t be bad,” he said. “We could spread them out three or four weeks.”

He said anyone interested in taking the lead for a soap box derby in another ward should approach their recreation committee and express that interest.

“I’m sure every rec committee, just like ours in Ameliasburgh, could use some more volunteers to say ‘I’m up for this type of project,’” he said.

Nowitski said he’d be willing to provide assistance and information to interested parties.