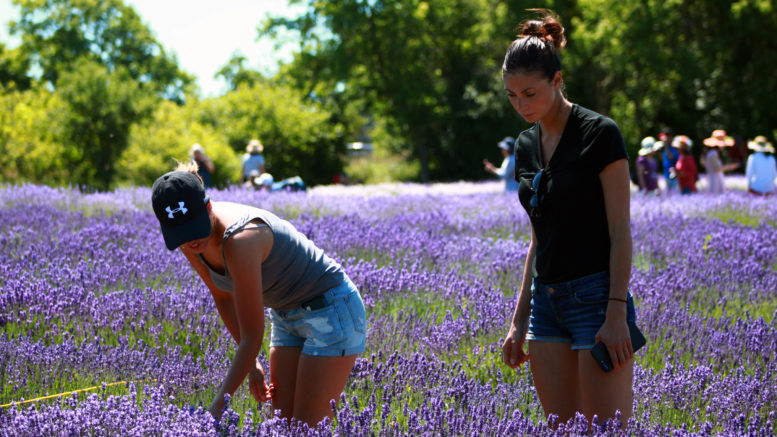 An estimated 5,500–6,000 visited the Closson Road property over the weekend where for the past seven years Derek Ryles and Rolande Leblanc have built a summertime staple.

By late Saturday morning, there were hundreds of people sampling treats like lavender lemonade, buying fresh bundles of lavender, or learning more about how the essential oil is distilled. More visitors rolled in by the minute.

Toronto resident Pamela Elwood said it was her first visit to the festival after hearing about it from a vendor during Toronto’s One of a Kind Show and Sale.

Elwood said she’d sampled some of the fresh lavender lemonade and cut her own bundle of lavender to take home.

“It’s a good event,” she said. “I would come back just to see the lavender alone — the field itself is beautiful and I can’t get over how much it takes to get one litre of the oil.”

Leblanc said the festival was a success once again.

The colours were perfect and everyone seemed to be enjoying themselves, she said.

The festival continues to draw visitors from around the world. There was a busload of visitors from Ireland and patrons hailed from Poland, Russia, Brazil, Mexico, and Austria and beyond.

“They are getting to know it by our website of course, but I think the word is out there,” Leblanc said. “It was interesting counting the money at the end because you usually get Canadian dollars and American dollars — we even got some Euros this year,” she said.

For the first time, the festival featured a pair of prizes — a two-night stay at Prince Edward County Lavender’s bed and breakfast, and a lavender gift basket valued at $100. While the original formula is clearly working, Leblanc said it was nice to offer up something a little bit different.

“People are always looking for something new and we thought that would be an attractive idea,” she said.

The winners were from Toronto and Leblanc expected to notify them this week.

Lavender is known for its calming and relaxing properties and has been used to fight insomnia, anxiety, and depression. It seemed that there was a sort of calm and relaxed atmosphere to the event as visitors lounged and enjoyed a drink and some live music by Brighton-based duo Ralph and Ray and later Ben Vandergaast on Saturday. Jazz guitarist Robert Keyes and flamenco guitarist Roger Scannura were featured entertainers on Sunday.

Beyond just lavender, the event also offered plenty for kids. A bouncy castle? Check. Petting zoo? Check. Food? Triple check. Leblanc said the idea is to have a little bit for everyone as the festival continues to compete with many others in the busy summer season.

Prince Edward County Lavender stresses that the festival isn’t exactly a market, there aren’t going to be dozens of vendors. It’s more about lavender and family entertainment.

Family was a strong theme throughout the weekend. Leblanc said she and Ryles had family members from across the country join them to help put on the festival with relatives travelling from the Yukon, Brandon, Manitoba, and Quebec.

“It was their first time at the lavender festival and they were awed with how everything is calm,” she laughed. “My brother was saying ‘even the kids are calm.’”

After seven years, Leblanc said it feels great to continually receive wide support for the event. She thanked all the residents of Prince Edward County for their support, local businesses who put up posters and offered kind words and, most of all, the many volunteers who work each year to help deliver the festival.