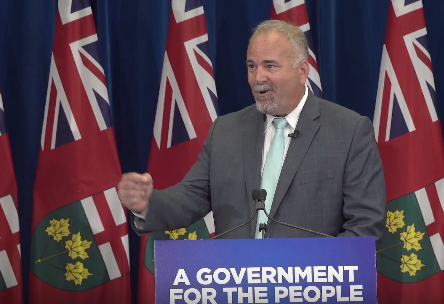 Ontario’s new Progressive Conservative government will be making the cancellation of the White Pines Wind Project one of its three top priorities as it recalls the Queen’s Park legislature this week.

Bay of Quinte MPP Todd Smith made the announcement Tuesday afternoon, while briefing the media as government house leader.

“We’ve decided to recall the house and it is clear there are areas of public interest that require urgent attention from our new government,” Smith said. “The people of Ontario can’t afford to wait and they won’t have to wait. We’re prepared to act and we’re prepared to act now.”

Smith said the government plans to use legislative tools to ensure York University students are back in their classrooms this fall, it plans to strike the previous government’s cap-and-trade scheme from the books and repeal legislation that would enable a future government to impose a cap-and-trade carbon tax. Then, he focused on an issue that’s been close to his heart from his own riding.

Smith said the announcements send a message about what the public can expect from a Doug Ford government moving forward.

“We’re going to keep our promises, we’re prepared to act, and we will always put the best interests of the people first.”

Reporters asked Smith about other promises made on the campaign trail, such as the removal of Hydro One chief executive officer Mayo Schmidt, a revamped sexual education curriculum, and changes to beverage alcohol sales.

He replied that cabinet is working on those issues and has been briefed about how to accomplish promises made during the election campaign. The issues he mentioned as priorities were moved forward because of their time-sensitive nature.

No further details were offered during the media availability about how the government plans to cancel the White Pines project.

The news spread within an hour to demonstrators at Bond Road and County Rd. 10 near Milford protesting the arrival of turbine components and sent some to social media in hope of verifying what they had heard.

“We commend the Ontario government for taking swift action to end this project, which has been met with opposition across Prince Edward County,” Quaiff stated. He added that since 2013 when the municipality declared itself an unwilling host, its opposition to industrial wind turbines — and later, this project specifically — never wavered.

“Council has taken the consistent position that the installation of nine industrial wind turbines in South Marysburgh would be detrimental to our pristine natural environment and our world-renowned reputation and a culturally and historically rich tourism destination,” Quaiff said.

“South Marysburgh is a natural gem within our municipality. This area is home to many families. Furthermore, the area offers habitat to birds, turtles, bats, and other animals, including many at-risk species.”

Quaiff also commented on Smith’s suggestion that the government would seek to restore protection for local decision making, adding the County welcomes that approach.

“Moving forward, we strongly content that municipalities must be consulted on the issues that are most pressing to them when it comes to industrial wind turbines, including: Community vibrancy allocations, community and stakeholder engagement processes, wind turbine placement, compensation for lost property value and the availability of funding for municipalities to manage implementation.”

After seeing a judgment go against them in a last week in a legal action against the Independent Electricity System Operator (IESO) and White Pines proponent wpd Canada, the Alliance to Protect Prince Edward County (APPEC) received the more positive news with enthusiasm.

“We are extremely pleased and looking forward, as always with the continued support of our members, to a county that is turbine free,” said chair Gord Gibbins.

Gibbins credited Smith for representing his constituents concerns and interests in a short time and following through on his election promises. He said APPEC will be working with its legal counsel Eric Gillespie to determine its next steps, including an upcoming motion for a stay of construction.

Ian MacRae, the president of wpd Canada, indicated in a statement to reporters that the news caught his company by surprise.

MacRae said wpd will wait until it sees the proposed legislation before making any decisions, but added the company intends to seek “full compensation for any and all costs and losses associated with the project.”