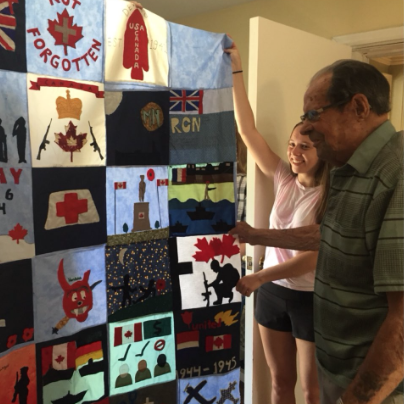 HONOURING A HERO- Picton resident George Wright examines a quilt presented to him by PECI's Grade 10 Venture class. The quilt was identified this weekend at the Stitch in Time Quilt show and will be part of the Quilts of Valour program. (Submitted Photo)

What started out as a tribute to one of Prince Edward County’s Second World War heroes has ended up as part of a national recognition program.

A quilt with panels designed and crafted by PECI’s Grade 10 Venture Program students for Devil’s Brigade veteran George Wright was identified and added by the Quilts of Valour program at the Stitch in Time Quilt Show organized Prince Edward County Quilter’s Guild this weekend.

Quilts of Valour organizers are aiming at delivering 20,000 quilts to 20,000 past and present Canadian Armed Forces members by 2020.

The quilt, originally presented to Wright at the end of the 2017-18 school year, was on display at the biennial quilt show at the Wellington and District Community Centre this weekend where it caught the eye of Quilts of Valour officials.

Venture program educator Greer Koutroulides explained the quilt will be catalogued and numbered to help the program reach its goal and that Wright would retain the gift presented to him at his Publow House residence in late June. 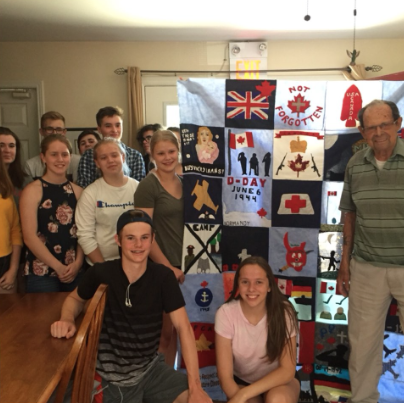 The quilt came as a result of a historical documentation program created by local documentarian and former CBC broadcaster Peter Lockyer.

One of the topics tackled by students was the life and times of Wright.

The Picton native enlisted in the Hastings & Prince Edward Regiment in 1940 and would quickly volunteer for a joint special forces group comprised of American and Canadian soldiers to undertake dangerous missions against Axis powers all over the globe including the Aleutian islands, France and Italy.

Officially called the United States-Canadian 1st Special Service Force, the elite commando unit earned the nickname ‘Devil’s Brigade’ thanks to the black paint the soldiers would smear on their faces before battle and the manner in which they fought.

Koutroulides said the students were struck by the fact Wright made a point of joining them for the short documentary screenings in May.

“The fact he wanted to be there and be a part of it all really struck a chord with the students,” Koutroulides said.

Afterwards, Koutroulides gave the students an option of either writing a test about World War II or creating a quilt for Wright as a token of their appreciation and respect for his efforts in fighting for freedom.

With the help of experienced quilters Carole Ostrander and Jayne Cunningham, the students were able to create panels before the end of the school year and assemble a quilt in time for the piece to be presented to Wright on the final day of studies prior to examinations.

While summertime pursuits might have occupied many of the students minds as of late, the teacher was able to make contact with the class Monday to inform them that the quilt was now part of a national program.

“I told them how proud I was of all of their efforts,” Koutroulides said. “This has been a very meaningful experience for everyone involved.”