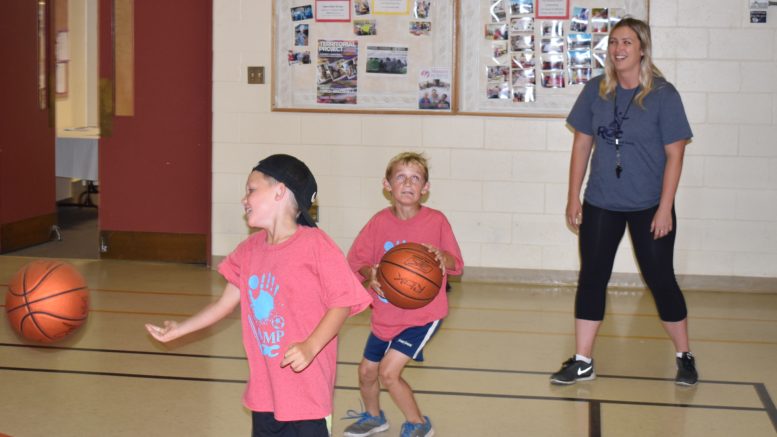 ON THE BALL- Camp ROC Participants (from left) Mason Lloyd and Ryker Wood play around of bump basketball while under the supervision of ROC Program Facilitator Lindsay Ferguson. (Jason Parks/Gazette Staff)

The kids are back rocking at Camp ROC.

After a one year hiatus, the local youth sports and arts camp organized by the Recreation Outreach Centre is back with some significant new wrinkles.

First, campers and their parents had the chance take part in either one or two weeks worth of awesome group fun.

Second, 2018 marked the first year the camp was based around the ROC’s new digs on Main street.

Utilizing a campus concept, the activities took place at the Youth Centre, Benson Park and the Salvation Army gymnasium. In more recent years, Camp ROC was based at PECI however renovations in the last two years caused the program’s cancelation in 2017 and organizers to go to the drawing board in time to resurrect the day program this year.

Darlene Thompson, Executive Director of the ROC, said Camp ROC was a welcome return in terms of youth programming after a one year hiatus.

An average of 50 children were enrolled in each of two weeks that featured over half a dozen youth leaders and community leader instruction from Prince Edward OPP Community Services Officer Patrick Menard and PECI Teacher and Dramatic Arts organizer Matt Sheahan.

“It’s been better than we could have imagined,” Thompson said “This was a pilot project and to see how the numbers and the processes worked but, from what we’ve seen so far, it’s been really great.

Camp ROC, which got its start back in 2001, has been a large scale, week long camp that hosted over 100 children per session.

A smaller, scaled camp has lead to more direct contact between youth leaders and campers, a positive for both parties as well as the program.

“The one-on-one opportunities with the youth leaders has been very positive and there’s been great avenues for leadership and both skill and character development,” Thompson said.

Program coordinator Sydney Kerr started in her role last July and said almost from the start, parents and youth wanted to know if and when Camp ROC was coming back.

“Camp ROC was definitely missed and everyone was asking about it,” Kerr said.

Kerr was tasked with training the youth leadership staff comprised of secondary and post-secondary students who were virtually all Camp ROC-ers as children.

While the Camp provides an opportunity to play, learn and grow for the campers, it also offers an avenue of development for leaders.

“Camp teaches a lot of transferrable skills such as leadership, patience, organization and kindness,” Kerr explained. “We see the youth leaders practicing these skills each and every day and this is knowledge they can take into other summer employment opportunities future careers.”

For more information on Camp ROC and other ROC programs, please visit https://theroc.ca