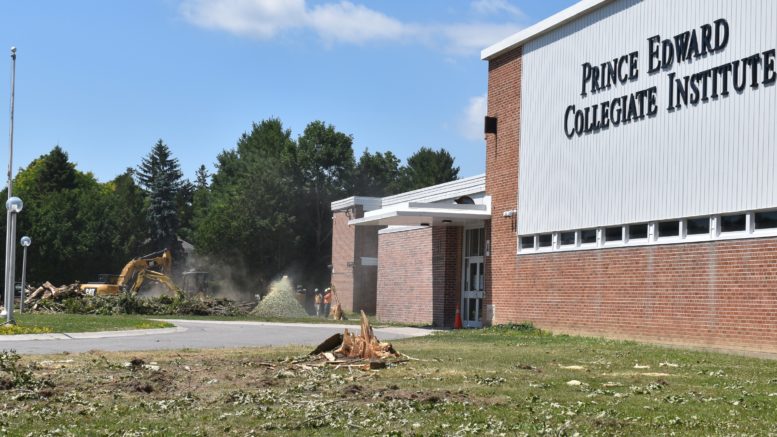 AT WORK- Cooney Excavating team members work at clearing the front of PECI in advance of a $370,000 make over to be completed prior to the start of the 2018 school year. (Jason Parks/Gazette Staff)

Like every other school board in the province, The Hastings and Prince Edward District School Board is taking stock in contracted and completed environmental upgrades after the provincial government announced it’s scrapping the $100 million Greenhouse Gas Reduction fund.

The program was a Cap-and-Trade funded capital renewal and improvement program that allowed school boards across the province to revitalize and renew aged building components, and upgrade/enhance school buildings to improve operational efficiency.

When contacted by the Gazette, HPEDSB spokesperson Kerry Donnell said the Board was made aware of the program’s cessation by the province last week.

Locally, the The funding represented approximately $1.2 million for HPEDSB in the 2018-2019 budget which was approved by the Board of Trustees on June 18, 2018.

According to Donnell, this funding was to be utilized to install high efficient lighting systems (LED lighting), high efficiency boilers and real-time energy monitoring systems at various HPEDSB facilities in the region including schools in Prince Edward County.

During a media availablity at Queen’s Park Tuesday, government house leader and Bay of Quinte MPP Todd Smith was asked to comment on the move. He left the door open to alternative funding models.
“One of the key commitments Doug Ford and the PC Party made during the election campaign was to scrap the cap-and-trade program and we’ve lived up to that promise,” he said. “There are a number of programs affected by that — of course, there was the $14,000 rebate program for millionaires who were going to get that rebate for buying a Tesla or electronic car. Those are the kinds of rebates that were killed as a result of the cap-and-trade program.
“There are other programs as well that are affected. I can tell you at the cabinet table we are discussing all of those programs and ensuring that those that are needed, we’ll find a way to pay for those programs going forward, it just won’t be through the Liberal cap-and-trade slush fund.”

In other HPEDSB news, work has been steady at Prince Edward Collegiate Institute as both exterior and interior modifications are well underway in advance of the start of the 2018-19 school year.

The front entrance and yard was in the process of being cleared this week before Cooney excavating builds a new $370,000 entrance way to allow for a bus drop off point.