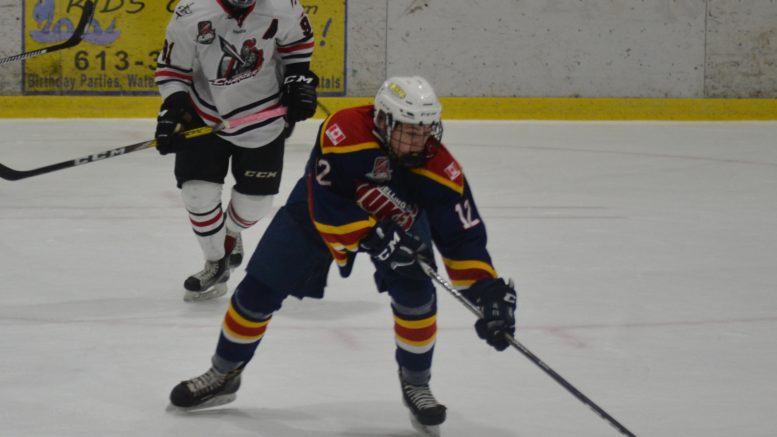 BUSTING THROUGH- Dan Panetta and the Wellington Dukes had an outstanding 2018 Chowder Cup in Foxboro, MA this weekend. (Jason Parks/Gazette Staff)

The chowder was very much to the Wellington Dukes liking in New England this past week.

A club consisting of prospects and a current Dukes forward made it all the way to the John Cunniff Senior Chowder Cup finals in Foxboro, Massachusetts on Sunday afternoon before falling to the Northwood Prep Huskies 4-1. 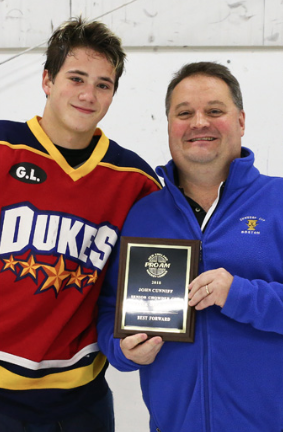 It was an arduous climb to the summit of the Chowder Cup finals as Wellington was tasked with winning three straight elimination games on Sunday just to make the final contest.

Wellington has had some nice Sunday forays in previous Chowder Cups but the 2018 run is more a little more unique.

In years past, the organization has typically taken their spring development team to the showcase event which has served as a culmination activity for the off-season club.

This year, due to turnover and extending their playoff run as long as possible, Wellington was unable to organize a squad to play in the Central Development Hockey League or any other spring league meaning this team was the definition of ‘throw together’.

“The players had a really great week and it was a unique situation in that we went in there blind,” Dukes assistant coach Derek Smith said.

Smith served as head coach for the club which consisted of a potpourri of puck prospects.

In terms of local talent, Quinte AAA grads and Prince Edward County natives Cooper Rogers and Nick Kirby suited up along with a number of other Red Devils alums.

But skaters from Northern Ontario, the United States and a Montreal-born netminder that plied his trade in Florida last season filled out the balance of the squad.

In the middle of it all was Dukes forward Daniel Panetta who’s game has grown in leaps and bounds over the last 12 months.

Somewhat of an unknown quantity coming into his rookie season last year, Panetta is developing at a lightning pace.

Part of Wellington’s playoff success in 2018 could be directly attributed to Panetta’s work in the defensive end, particularly when the club was shorthanded.

An offseason workout and training regimen seems to be serving the Belleville native well and it clearly showed dividends this weekend as Panetta was one of the best skaters in the entire tournament. 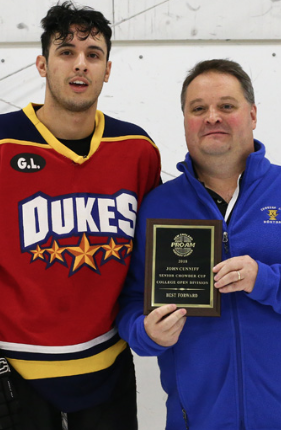 “He was our leader, he had a great week and has been working extremely hard,” Smith said. “He’s on a mission to become even more of a go-to option for the Wellington Dukes this season. He led us on the ice, he landed on the score sheet, pushed the pace and was a leader on and off the ice.”

The Dukes opened the showcase Thursday with a 3-3 tie of FCA Hockey, a Christian Hockey Ministry program based in Alexandria, Minnesota.

Scoring details were not made available.

On Friday, Wellington picked up their first win of the tournament, shading Team Doritos 4-3 thanks to a pair of goals by Kingston Frontenacs AAA blueliner Kieran Baker and singles by Panetta and New Liskeard, ON native Tanner Flood.

With their playoff hopes on the line on Saturday, Wellington erupted for its highest goal output of the showcase, blasting the Rhode Island hockey development outfit Little Rhody Hockey 6-3.

Panetta pushed the pace with a pair while Kirby, Jaxen Boyer and Flood also found the range.

On Sunday, Wellington started off their playoff run with a 2-0 whitewash of the Massachusetts Titans.

With a title on the line and the teams growing fewer by the game, the contests ratcheted up in drama and Wellington would require a shootout to slip past the Brockville Braves 2-1.

Panetta would score for Wellington who were on to face the Quebec Junior Hockey Association White team.

The Dukes would win 3-2 in overtime to punch their ticket to the finals thanks to goals by Kirby (2) and Panetta.

Panetta, who was named to the all tournament team at the conclusion of the event, scored the lone goal in the final game against the Huskies. 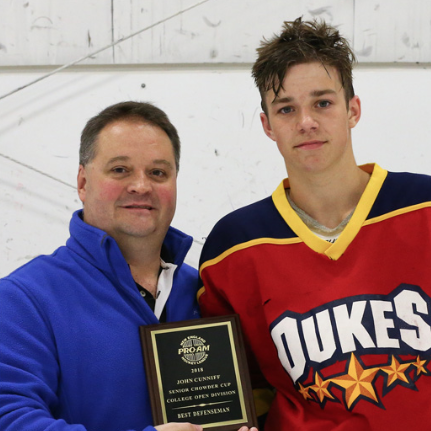 The Philadelphia, PA native showed a nose for the net and was dynamite on a line with Panetta.

Also earning a spot on the Senior All-tournament team was Ben Brunette.

The North Bay native was classified by Smith as a 200 ft. Defenceman that is capable in all corners of the rink.

“He finishes his checks, he’s got nice offensive instincts and was a rock for us back there all tournament,” Smith added.

In net, Francouer, who played for the Florida Eels of the United States Premier Hockey League last season and was an Ontario Hockey Academy grad in 2016-17, gave something for Wellington to think about when it comes to the Dukes goaltending situation.

“He had just a great weekend,” Smith said of Francouer. “He was recommended to us by a scout and he was the back bone of the team. Dan is somebody we have to keep our eye on but there’s lots of interest from a number of teams.”

In terms of team building for this upcoming season, Smith said some of the players certainly injected themselves into the conversation.

“You look at the Quinte AAA Minor Midgets last season and they were very successful but we weren’t sure how some of them would fit this coming season,” Smith said. “There’s some players that definitely opened our eyes and they could very well have a home with the Wellington Dukes whether it’s this year or next.”

‘Round the ‘Roc: The Wellington Dukes will have to do without a dynamic scoring forward next season as Mitchell Mendonca signed on with the Niagara Falls Canucks of the Greater Ontario Junior Hockey League earlier this summer. Mendonca had 40 points in 44 games last season and scored the overtime winner in Game One of the 2018 Buckland Cup Finals…The Dukes apparently couldn’t lure Callum Volpe east and will have to try their luck with another Western Canada-born defenceman. Wellington picked up Volpe and Nick Abbot for Mason Snell earlier this summer. The club flipped Volpe to Chilliwack for the rights to 6’5” blueliner Kyle Yewchuk. The Calgary native played 34 games for the Chiefs last season and has over 100 games of Western Hockey League experience.