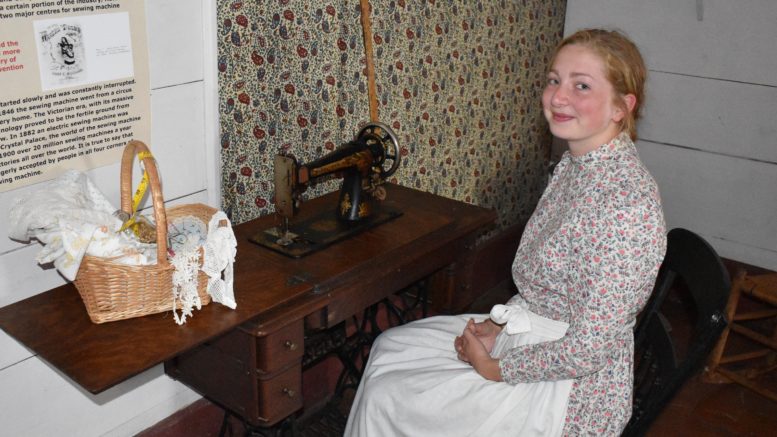 A little off the beaten path in terms of traditional tourist routes, the Rose House Museum in North Marysburgh continues to be the hidden gem in the Prince Edward County museum system.

Home to several generations of the Rose family who settled in what was then known as Marysburgh in the late 1700’s, the family farm house-turned-museum offers an authentic example of the conditions a typical United Empire Loyalist settler and their family would have lived in during pioneer days in Prince Edward County. A display on canning and preserving at Rose House Museum. (Jason Parks/Gazette Staff)

This year, the museum is featuring several new displays that explain and detail common practices of the past-everything from fashion to food is explained according to curator Dianne Denyes-Wenn.

“The first thing our guests will notice is that we are celebrating Christmas in July,” Denyes-Wenn said. “We’ve decorated the parlour for an 1850’s Christmas celebration.”

With a tiny Christmas tree on the table, wrapped gifts and bunting adorning the eating space, visitors won’t be able to stop humming their favourite Yuletide carol.

The summer kitchen and pantry were Rose matriarch Christina gave birth to her 14 children features restored antique Singer sewing machine and an explanation of what Mahatma Gandhi called “One of the few useful things ever invented.”

In the side building on the eastern side of Rose House, there is a display that details the importance of home preserves and canning in early years and how the practiced morphed into an entire industry that sustained Prince Edward County farmers for many decades in the 20th century.

And for fashion bugs, the space also includes a look at wedding dresses from the primitive days before Queen Victoria wore a white wedding gown through to today. “Brides never wore white before Queen Victoria,” Denyes-Wenn explained. “That was when the trend started but before that, they would wear their best dress because it more practical.”

And while current wedding planners might think of flowers as an esthetic feature, bouquets also had a practical use in the 1800s.

“Typically, people would bathe in May and most weddings were in June, so the flowers were used to keep smells down,” Denyes-Wenn said.

From pre-Queen Victoria to the flapper days of the 1920’s to the 2000’s, the collection features several examples of dresses and gowns.