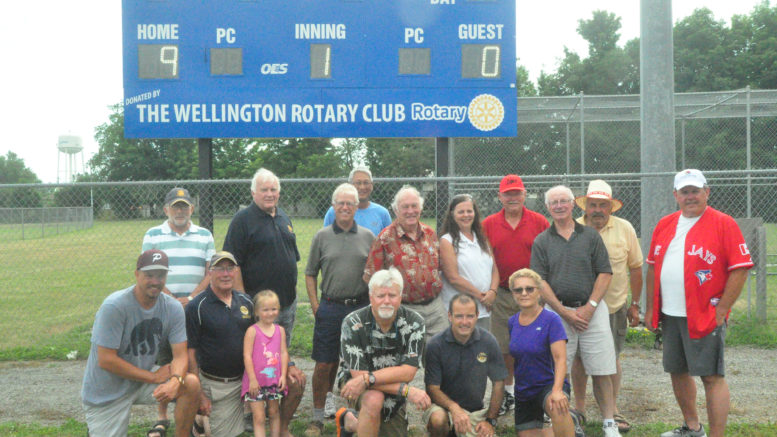 This weekend, the Quinte Royals major peewees will welcome rep baseball teams from around Ontario to Wellington to play ball — and everyone at the Field of Dreams will know the score.

Earlier this week, the Prince Edward County Minor Baseball Association (PECMBA) welcomed the Rotary Club of Wellington and County councillors to the Belleville Road complex to see a newly installed blue scoreboard in right centrefield. The addition to the park is part of a $20,000 commitment Rotarians made for improvements, with money also set aside for bleacher improvements. Council also did its part, committing $6,000 to install the scoreboard to meet specifications for anchoring.

“It really adds polish to the field,” said Jane Allison, of PECMBA. “It means so many things to us. We can host high-end tournaments… For our small community to have the same facilities as the bigger towns to the west, or even Trenton, is simply amazing. The kids love it, especially when we’re winning and they can see it.”

Allison explained at the higher levels of minor baseball — bantam and midget levels that involve teenagers competing — pitch count is a big part of the game. Displaying it adds a degree professionalism.

“It just enhances the ballpark. When someone slips in here to watch a couple innings, you can tell what the score is when you couldn’t before. You’ll ask somebody and you might get the right score and you might not. It’s an enhancement. The kids like to see their number there when they come to bat.”

John Allison called it “quite a gift from Rotary” and was pleased council also assisted. He said the project came in under the amount budgeted by the municipality and it should last for years to come.

He said over the 11 years they’ve developed the Field of Dreams, it’s been a true community effort with many volunteers putting in hours of hard work.  He said it’s nice to see their vision coming to fruition.

John Allison said he believes that when people come to town for a tournament or a game, there’s spin-off for local businesses. He also said it offers a boost for  county ballplayers in the regional Royals system.

“A lot of kids play on the Royals teams and they now have a chance to play at home. Their parents and grandparents come and watch. It’s a good scenario.”

Wellington councillor Jim Dunlop said he appreciates all the work PECMBA volunteers like the Allisons, Matt Ronan, and others have put in over the years to maintain and improve the diamonds. He said it not only allows local athletes to stay active at a young age, but it also helps the community’s economy.

“The Rotary Club has done so much with the harbour, the Millennium Trail, and now the sports field. We thought we’d get help them get over the hump,” he said.

As for future plans for the complex, Jane Allison said she wouldn’t be surprised to see a drive for an addition to the field house behind the home dugout on the main field or perhaps a scoreboard for the secondary field.

The diamonds will be busy again in the coming weeks as Wellington will also host Quinte Baseball League house league tournaments for midget and peewee players.

The Royals are slated to open the tournament tonight at 6 p.m. The team’s coach, Adam Martin, and several of its players are from Prince Edward County.