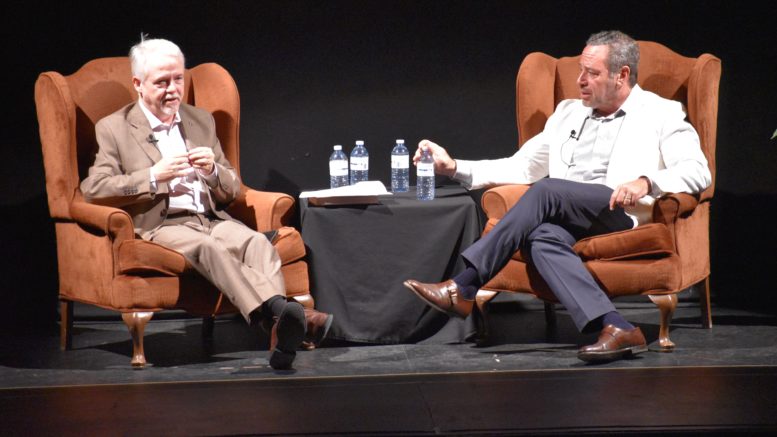 TRUMP TALK- (Left) Dr. Thomas Harrison and political author and Senior Editor of the The Atlantic David Frum engaged in a discussion about U.S. President Donald Trump's rise to power at the Regent Theatre Thursday evening. The event, a fundraiser for improvements to the Picton Library and the Regent Threatre, was sold out. (Jason Parks/Gazette Staff)

It was a political conversation and subsequent question-and-answer period that could have taken place on any of the major U.S. news networks or at any lecture hall at a prestigious institute of higher learning in North America.

But it took place in Picton, to the benefit of the Prince Edward County library system and featured one of the greatest conservative-rooted minds of our time.

That’s not to diminish the role of Dr. Thomas Harrison who admirably played the role of questioner, foil, director and host Thursday night at the Regent Theatre.

But even Harrison would admit a capacity crowd flocked to the “Monarch on Main Street” to listen to David Frum.

The senior editor of The Atlantic, author, and speech writer for George W. Bush who penned the phrase “Axis of Evil,” and proud part-time Prince Edward County resident donated his time in benefit both to the Picton Library Expansion Project and the Regent Theatre for an enjoyable 90-minute session.

Frum and Harrison, also a county resident with a particularly glowing curriculum vitae including the position of adjunct professor at Queen’s University’s law faculty and published author with contributions to the Globe and Mail and The National Post, spoke to Frum’s latest work Trumpocracy:The Corruption of the American Republic.

The book was largely penned at the Frum summer house west of Wellington in 2017, a period of time after Donald Trump’s inauguration when it became clear that “Draining the swamp” was synonymous with chaos, destruction of western democracy and conservative ideals that forged institutions and policies near and (previously) dear to every Grand Old Party member’s hearts since the end of the Second World War.

Frum was introduced to the county by his in-laws, late Toronto Sun founding editor Peter Worthington and his wife Yvonne who themselves settled here in 1990 and were passionate patriots of Prince Edward County.

Not an optimist by nature, Frum explained he held a foreboding sense of fear and loss of so many things held so dear to him such as the North Atlantic Alliance and Conservative politics.

“But then I’d look at that magnificent lake and that magnificent sun and go into Wellington,” Frum said. “I’d bump into someone, either people I knew and someone I didn’t and who saw me on TV the night before and there were so many acts of kindness and welcome…It was a very upsetting summer for me and people would say something and what was maybe a causal comment for them was so very profound to me. So thank you.”

In essence, the county was a place of welcome and respite for Frum while he delved into the dark path of a Donald Trump presidency.

In discussing his parents and their influence on him, Frum shared a nice anecdote about his late mother Barbara Frum who was a well-known broadcaster with the CBC.

Frum said he was elaborately educated at many costly institutions but his real education came at Barbara’s octagonal dining room table.

The author explained that he or his sister would say something foolish or immature or stupid and Barbra Frum would move in like an interrogator.

“She would never say anything directly about what you had done or said but she was always moving the questions and had these two parallel lines of questioning that would all of a sudden intersect and then, bang, she would ask you a question and you realized you had been a jackass.”

“That was an education,” Frum said with a laugh. But much of the evening was naturally devoted to the 45th U.S. President.

Frum labeled Trump a “deformed personality” and said in the entire world, millions of people are good and some even saintly while some were decidedly not.

“Political systems in democratic countries are designed to keep these (bad) people away from power. It’s not a mystery these people exist, it’s a mystery how the system that is supposed to keep them from power fails,” Frum said.

At its heart, Trumpocracy is about Trump’s power and how its executed upon the people around him.

“(Trump’s) not surprising. What is surprising is that other people with power with the ability to stop him chose not to do so,” Frum stated

Frum found it interesting that Thursday’s talk took place literally steps from the historic Picton Armoury where soldiers from the Hastings and Prince Edward Regiment mustered in advance of the First World War  and Second World War.

The generation that lived through the Second World War and came home said “We are never doing that again”and went to work creating a world that might have some injustices and harshness but was, by and large, predictable, orderly and operated with institutions and was governed by the rule of law in most instances.

This was a world built by our parents and grandparents, and, despite some of its ills, was a really good system for all the stakeholders.

“To see somebody come along and try and wreck it and bend the laws or even break the laws of his own country in order to do it…there’s people that truly do value these institutions and people with the power to stop it but don’t,” Frum stated.

Harrison said in his view, Trumpocracy was clearly a cautionary tale but that the work starts and ends on a note of hope as its Frum’s determination Americans have overcome worse challenges in their history.

“There are signs of hope and I’ve been on many stages like this — never so close to my own bed —  but people will come out on nights like this with other calls on their attention. They are concerned about what’s happening,” Frum added.

One of those positive signs is a rededication to truth.

Frum explained truth was one of the pillars of democracy and a tool of people in power to govern accordingly and it’s  a beacon that’s starting to shine brighter amongst those that value and understand it.

In  Frum’s formative years, a pledge to defend NATO and a Western commitment to defend and defeat the Soviet Union was real.

However, in recent years, that tact might have lost some steam as it was popular to deem these practices and institutions  unnecessary as the world evolved and seemingly moved away from the Cold War.

Those commitments to freedom have re-emerged at the forefront of these chaotic times and Frum pointed to the many left-leaning or downright liberal institutions he’s been welcomed to speak at during the Trump years where he would not been so warmly received in years prior.

“If I told you then what I thought about Julian Assange and Edward Snowden, I wouldn’t have received as warm a reception but now you see what I was was trying to say in 2014 about these people and what their real goals are and what they are trying to destroy,” Frum said of his message to young people that weren’t conservative by brand but have been able to survey the western world as it stands with Donald Trump at the helm.

There’s been reckoning on the left to be sure but for those conservatives that can see the brand damage being inflicted as the Trump train careens down a rickety track, there’s been realization on the right as well.

Frum said the conservative bent has been to be a little callous about the small injustices of life and shrug them off as part of the human experience.

“What Donald Trump has done is taken the spectacle of human callousness and cruelty and blown it up to 1,000 times its normal size and put it in the middle of the most visible place on the planet and said ‘Look at this, how do you like it?’ and you look at it and say ‘I don’t like it at all.’,” Frum said. “It’s not a coincidence that the #metoo movement has erupted in the Trump years. A lot of people that thought those things were a part of life…well, maybe they shouldn’t be.”

“Donald Trump forces you to think that things that were easy in 2012 shouldn’t be easy anymore.”

In terms of the steady barrage of news, Tweets and off-the-cuff comments that could be considered exaggerations, mistruths or outright lies, Frum believes the Helsinki conference between Trump and Russian president Vladimir Putin earlier this month has been the turning of a new chapter.

Simply put, all the explanations that followed in the days after Trumps’s actions and comments in Finland “didn’t quite equal what the world just saw.”

Putting the Russians in context, Frum labeled them “very tough customers” with nuclear power but also a small economy that is about the same size as Spain.

Their dictatorial system allows for a great consolidation of wealth amongst oligarchs and there’s a standard of corruption in which the oligarchs are allowed to operate freely.

“What they do have is a grip on the American political system and that’s evident to everyone that’s watching,” Frum said. “Look at how rude Donald Trump is to everybody. The German chancellor, the prime minister of Canada. You can see when he’s with Putin, it’s different. There’s many secrets but no mystery. We don’t know why things are the way they are but we can see what’s happening.”

When pressed by Harrison as to what Russia might have on Donald Trump to exact such a departure in post-Soviet era relations by a sitting U.S President, Frum said he had theories but in the end, they didn’t really matter.

Frum likened the grip Russia has on Trump to the way someone might grip an advisory’s arm in a confrontation.

“When I can see the fingerprints of an invisible hand on your arm, I don’t need to know why the person is gripping your arm. I can see the marks of the tight grip. To have a meeting with the Russian dictator with no note taker, no national security advisor, and two hours later emerge with commitments?” Frum wondered.

In historic summits that pitted traditional U.S. leaders and advisories like Mikhail Gorbachev and Chairman Mao, Ronald Reagan and Richard Nixon did not enter the summits alone.

“Nixon meet with Mao Zedong and there were 20 people in the room, note takers, aides and translators because there’s so much at stake and there can be no misunderstanding,” the author noted.

In regard to the Robert Mueller investigation concerning collusion with Russia, Harrison asked Frum if Donald Trump could effectively shut down what the President regularly calls a “witch hunt.”

Frum offered his best quip of the night when he said it was getting harder and harder for Trump to quell Mueller and the investigation.

“Trump calls it a witch hunt but the trouble is Mueller keeps finding gingerbread cages with children locked inside them,” Frum said to the laughter of over 440 patrons.