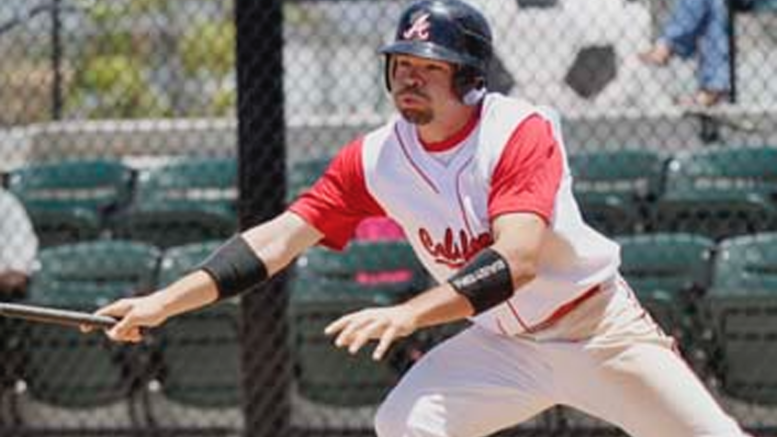 HALL OF FAMER- Wellington native Paul Rosebush will be inducted into the International Softball Congress Hall of Fame August 12 in Kitchener, ON. (Bob Otto/Otto in Focus)

A Wellington native is taking his rightful place amongst softball’s very best.

Paul Rosebush might call Bakersfield, California home now but next month the man everyone knows as ‘Rosie’ will be making a return to Canada.

On August 12th in Kitchener, ON, Rosebush will be part of the 2018 induction class of the International Softball Congress Hall of Fame, joining the elite of the game of fast pitch.

The city is hosting the 2018 ISC Championships and Rosebush told the Gazette with a laugh he was really looking forward to returning to Canada to have a Tim Horton’s coffee and a few authentic Molson Canadians although probably not at the same time.

Rosebush was in a class of his own during the 2000’s as softball’s best leadoff hitter, compiling a .330 average in major fast pitch tournaments over the decade with the vaunted Farm Tavern club based in Madison, Wisconsin. Outside of his starry ISC career, Rosebush was an integral part of the gold medal winning entry at the 1999 Pan Am games in Winnipeg for Team Canada.

Rosebush would wind up scoring the championship’s winning run in the bottom of seventh inning, lifting Canada to a dramatic 4-3 victory over the United States in a game that was broadcast on the CBC from coast-to-coast.

Contacted at his home in Bakersfield where he is still a revered figure after playing professional hockey in the city for seven seasons, Rosebush admitted he was pretty excited about his nomination and upcoming enshrinement.

“I was nominated a couple of times prior but they have a rule that you have to reach the age of 40,” Rosebush said. “I knew it was probably going to happen one day and I was excited when I heard the news.”

The ISC tournament is an annual travelling World Series of softball featuring the best club teams from all over the planet.

Somewhat like the Super Bowl in that the event is hosted around North America but only in about half a dozen pre-selected states and provinces (Wisconsin, Michigan, Indiana, Iowa, Ontario, etc) where softball is big business.

The ISC Tournament in Kitchener this year is as close to Prince Edward County as the international showdown could get and although that means a longer flight for Rosebush, that’s just fine.

“It’s pretty cool, it means that a lot of the family and friends will be able to attend as opposed to if the ISC tournament was in the mid-west somewhere,” Rosebush said.

While the ISC nod comes by way of his accomplishments on the grandest stage of softball, Rosebush started making a name for himself early in the 1990s as part of local entries that won three Ontario Amateur Softball Association crowns.

It’s those days when he was winning titles for Prince Edward County with his friends and fellow classmates that resonate even to this day.

“It may sound crazy but those memories I have of playing for Quinte Meats and all of those guys I grew up with and having the chance to win an OASA title with your friends still stick out very vividly in my mind,” Rosebush said. “Not that winning the Pan Am Gold medal or an ISC championship isn’t a very cool thing, those are tremendous accomplishments I’m very proud of. But those things that tug at your heart a little more are the ones where you are competing at such a high level with your buddies.”

A member of the inaugural Prince Edward County Sports Hall of Fame induction class, Rosebush said he still gets a rise thinking back to those All Ontario crowns when fans from all over would flock to the Wellington softball diamond and watch the best OASA team for miles around perform.

“I’ll never forget those days and it was very cool to win All Ontario with teams from Prince Edward County because you’re there at a big stage with friends and family looking on. It’s such an amazing feeling,” he said.

Paul’s father Rick had a prominent hand in coaching those teams and Rosebush recalls the late Garry Lavender and Hugh Parliament as major supporters of the sport of softball in Wellington.

“I remember Bill Shaw having a big influence on me and he was big in softball in Belleville,” Rosebush said. “He’s passed on now but I remember looking up to him and how he loved the game more than anyone.”

Quinte Meats teammates such as Jamie Blemkie, Darren Marshall and Shawn Gayton were also remembered fondly by the Hall of Famer. In terms of coaching at the professional softball level, Farm Tavern skipper Rod Peterson was one of the best to play for during the Wellington native’s career and the manager is quoted as saying it would have been an injustice if Rosebush never got the call to the ISC Hall.

“Rod had a lot to with why I’m being inducted into the Hall of Fame. He pushed for me to be enshrined in the Hall of Fame even when I was still playing,” Rosebush said with a laugh. “He was a very vocal supporter and a big advocate and I guess it shows.”

For nine magical seasons, Peterson would pencil Rosebush’s name into the top of his lineup card and good things would follow.

The Farm Tavern won scores of tournaments and were a perennial top-five team in the annual ISC rankings every year.

And at the centre of it all was Rosebush.

Among the fastest players in all of softball during his prime, Rosebush could turn a bunt single into a triple almost instantly and patrolled the outfield with authority.

“(Peterson) is a God the world of softball and it was an honour to go out there and play for such a well respected guy. He’s an awesome person, I’ll never forget everything he did for me and he still sends me a note a Christmas time, asking how I’m doing and asking about my family,” Rosebush said.

What makes Rosebush so unique is that while he was one of the world’s best softball players, his offseason included the undertaking the gruelling grind of leading the Bakersfield Condors in the East Coast Hockey League.

Starting in 1999 and ending in 2006, Rosebush played over 400 ECHL games and that solid pro career came after a great junior career with his hometown Wellington Dukes and a three year stint in the Ontario University Athletic Association with the Guelph Gryphons.

Prince Edward County’s answer to Bo Jackson can’t even figure how everything worked out so well over the span of two decades.

“It’s hard to grasp in my mind how everything has fallen into place for me to be able be honoured in the way I’ve been honoured,” Rosebush said. “Thinking back to when I was 10 years old, playing street hockey or having my brother fire balls through the pitching machine, that was likely the start of the itch.”

In terms of ISC dreams, Rosebush recalled attending a Perth Shootout tournament as a youngster.

The $10,000 showdown, organized by Prince Edward County native Neil Fennell, brought some of the best softballers in the world together annually.

“I said to myself leaving the tournament that day ‘I have to do this, I have to play at this level’,” Rosebush said. “I had a drive to compete at as high of a level as I could in fast pitch but then seeing that there was this level of softball out there in the world…I just had to be a part of it.”

Rosebush retired in from ISC play in 2011 after closing out his career with the California A’s.

While he still is proud of his Prince Edward County heritage and visits whenever the opportunity affords itself, Rosebush continues his post-sports career in California as a wildlife biologist.

A parent of three children with his wife Amy, Rosebush currently serves as director of coaches and coaches his own children in the Bakersfield Minor Hockey Association.

For more information on the 2018 ISC Hall of Fame Induction class and ceremony, please visit http://iscfastpitch.com/pdf/ISCHoF2018MediaReleaseTickets.pdf