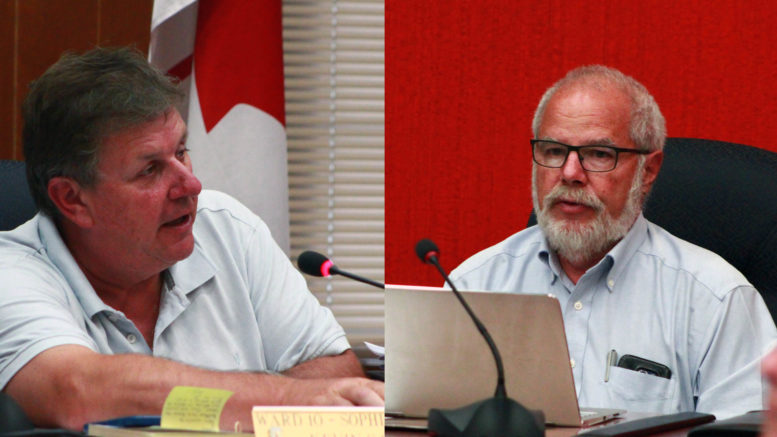 At least two familiar faces won’t be running in this October’s election.

In advance of the June 27 deadline to file nomination papers, longtime Sophiasburgh councillor Kevin Gale and Picton councillor Treat Hull told the Gazette they won’t be seeking a seat in the Oct. 22 municipal election.

Serving on council as a Sophiasburgh representative for six terms over 21 years, Gale said he looks forward to spending more time at home.

“It is time to direct my time elsewhere, particularly to my family,” he said.

He said county politics have changed drastically since the municipality’s 1998 amalgamation and those changes impacted his decision to step aside.
“Logic and common sense have been replaced with the fear of risk and liability,” he said. “When one loses the passion for involvement, it is time to step aside and let someone else hold the reins for a while.”

In his time as a municipal representative, Gale said he’s developed a thick skin, he’s met a lot of people, and has sat with some great people around Shire Hall’s horseshoe. He said he’s grateful for the dedicated efforts put in by municipal staff each and every day.

“Members of public often times don’t recognize or understand the complexity of government operations and their public attacks on municipal staff members or members of council can sometimes be difficult to accept,” he said.

After being involved in the community for so many years, Gale said he has no specific plans for the future.

“I just want to take some time off now to catch my breath and, as I said earlier, spend more time with my wonderful family,” he said.

Potential candidates still have until this Friday, July 27 at 2 p.m. to file nominations. The fee to file is $200 for mayor and $100 for all other offices. Potential candidates must provide at least 25 endorsements from eligible electors in Prince Edward County.

Gale said potential candidates should know it’s not an easy job and it can be frustrating dealing with fellow councillors and ratepayers.

“Stay focused and never lose sight of the fact that, although you are elected to serve the people of your ward that elected you, you are a Prince Edward County councillor and should do your best to represent all county taxpayers,” he said.

It has been an honour and a privilege to serve with some real county political legends that served the municipality, Gale said, noting the likes of Keith MacDonald, Wayne Drake, Laverne Bailey, Glendon Green, Jim Dunlop, George Vincent, Paul Morris, and Jim Taylor.

After serving as a Picton councillor for the last four years, Hull said it’s just time to slow down a bit.

“After a year-long and unsuccessful campaign for MPP, a sometimes full-time stint as chair of the board of a community organization and four years as a municipal councillor, I would like the opportunity to stop and smell the roses, at least occasionally,” he said.

When it comes to his experience on council, Hull said he comes away with two big conclusions. Firstly, he said issues are generally much more subtle and nuanced than they appeared before he joined council. Secondly, maintaining a cohesiveness between longtime residents and newcomers is essential.

“It is critical to the health of our community that the interests of both town and country are adequately reflected in council decisions,” he said.

Hull said those considering running for council for the first time should know that being a councillor isn’t like being elected to a management team to run municipal affairs.

“It is more like being elected to a board of directors which sets policy and oversees its implementation,” he said.

“If another councillor votes ‘against’ you on one issue, there’s a good chance you’ll be working together on the same side on another issue,” he said. “Councillors are not taking the stands that they do for personal gain, but because of how they understand the best interests of the community.”

As for the future, Hull said he’ll continue to be involved in the community, he’ll just be re-focusing. He said affordable housing is a critical issue in Prince Edward County and that’s where his volunteer efforts will be directed.

Mayor Robert Quaiff announced earlier this year that he would not seek re-election. South Marysburgh councillor Steve Ferguson and Ameliasburgh councillor Dianne O’Brien will run for the mayor’s position. Councillor Lenny Epstein has not yet announced his intentions.