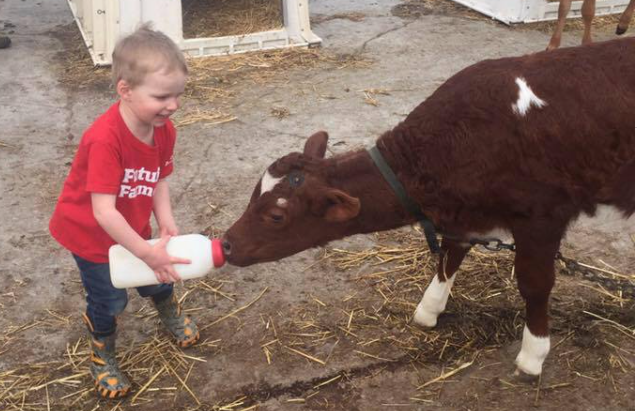 Next week’s annual Prince Edward County Holstein Club Farm Family Fun Night will be the standard celebration of the practice of diary and agriculture on this island community.

However, the 2018 edition will also be unique in that it will also serve as a welcoming of sorts as a new member joins the dairying community in Prince Edward County.

Kane and Courtney Rutgers and their children Emmett, Maran and Rhett will welcome the public Aug. 2 starting at 6:30 p.m. For the Farm Family Fun Night, a catered get together organized by the Holstein club and hosted at Everdean Farms at 13791 Loyalist Parkway.

The Rutgers own and operate a 35 head jersey cow milking operation that’s been been producing milk for just three and half years.

It’s a revival of sorts as Kane’s father and the Rutgers family had sold its milking quota back in 2001, only to so see the young man and his family start up a dairying operation of their own.

Rutgers figures it was just over a decade and a half between milkings at the iconic red barn about a kilometre west of the roundabout.

The young farmer told the Gazette he and his family were excited to host the Farm Family Fun Night as the operation ramps up.

“It’s awesome, this is the first year we’ve had the the land surrounding the barn so it’s a celebration for us in many ways,” Rutgers said “It’s a chance to say thank you to all the members of the Prince Edward County agriculture family. There’s been so many people that have helped us and encouraged us along the way.”

As has been the traditional practice, the event will feature food served by Taylor Custom Meats of Roseneath, ON as well as games, prizes and a calf show.

The event will also feature classic cars as the weekly Prince Edward Cruise Night is temporarily displaced from the Picton Fairgrounds due to the Annual Women’s Institute Arts and Crafts show.

Tickets are available at the event at a cost of $17 per adult and $8 for children under 12.

Children under the age of 5 are free.