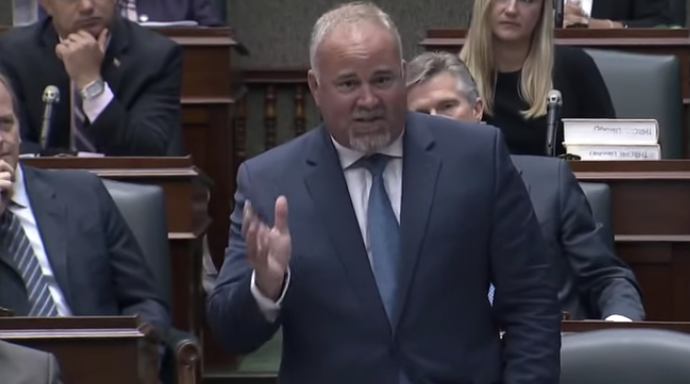 On Wednesday afternoon the Urgent Priorities Act passed second and third reading in the Ontario Legislature and with that, the White Pines Wind Project in South Marysburgh and Athol was officially cancelled.

Opposition MPPs hammered away at the government on the bill, which also included back-to-work legislation for York University and the introduction of new executive compensation structures at Hydro One, but ultimately it passed the final reading by a 70-40 margin.

“Legislating yourself out of contracts is going to cost money. We’re already talking about $100 million. That’s a lot of money,” he said. “But the larger issue here for a government that’s open for business is the message that the government is sending to foreign investors, which is ‘If we don’t like the deal, we’ll just change the law.’  That puts a chill on foreign investment”

Fraser quoted Business Council of Canada chief executive officer John Manley in saying the act would revoke permits several years after the proponent obtained them from the appropriate regulatory bodies while further questioning the move.

Peter Tabuns, the NDP MPP For Toronto-Danforth was also critical, but his main point of contention was over the way the legislation is handling compensation for wpd and the message it may send to other investors.

“I’ve listened to (Bay of Quinte MPP and government house leader Todd Smith) speak about the White Pines development, and I think people need to understand that there are two different things going on here. One is a decision to cancel a power generation project—well within the government’s purview. I disagree with it. I think we need green energy. But it’s well within their purview,” he said.

“What makes this different is that not only is there a cancellation going on, but there is an ignoring of what is really the law of this land: that when you do something like this, you have to pay compensation. It’s simple reality.”

Tabuns referenced German ambassador to Canada Sabine Sparwasser, Manley, and National Post columnist John Ivison, who all suggested the White Pines cancellation and provisions within the legislation to insulate the government from legal challenges for compensation — which he called “a constitutional right when you’re damaged” — send a bad message to potential investors.

Referring to investors, he said “the simple reality is, they don’t know if investing in Ontario will mean that a contract will be honoured, because this bill says Ontario’s word is worth nothing.”

A jubilant Smith made the government’s case just before Tabuns had the floor. He started with an acknowledgement he’s long fought the project.

“We are going to keep our promises on this side of the house. But I’ve rarely enjoyed saying “Promise made, promise kept” as much as I’m about to — because this one has been on my plate for seven years. When I first arrived here in 2011, I told the people of Prince Edward County if they send me to Queen’s Park, I would do everything I could to keep the county naturally green and turbine free. And I stayed in the ears of every Liberal cabinet minister that would listen.”

Smith also moved to counter the comments about a chill on investment.

He said the White Pines contract was originally signed in 2010 with a milestone commercial operation date of Jan. 6, 2015 and added in the power system, there’s a long-stop date of 18 months after that date. The White Pines project is two years past that now.

Smith also noted that a Feed-in Tariff 1.31 contract has a clause it cannot be reduced below 75 per cent of its initial nameplate capacity. Due to the Environmental Review Tribunal, it was reduced from 60 MW to about 18. Smith said that should have killed the contract by the Liberal’s own rules, but the Independent Electricity System Operator (IESO) amended it.

He argued that not only was construction not supposed to be taking place after May 1 (due to Blanding’s turtle activity), but it has been taking place non-stop since the middle of June, even after the government announced plans to terminate the project retroactive to July 10.

“If members opposite wonder why I don’t fear contractual chill, it’s because the proponent in this case has never honoured its agreements with the government of Ontario,” he said. “This project deserves to die. It deserves to die exactly as it should die today: Publicly and in front of the whole province, with the incompetence and bad actions of this proponent laid open for members of this house to judge.”

In further defence of the cancellation, Smith addressed the finances of the project and the need for the power it would supply.

“The wpd is erecting nine white elephants on the south shore of Prince Edward County. Calling them wind turbines should make no difference to the members opposite, but for some reason it does. And they are nine white elephants. They will do nothing to help this province fight climate change — absolutely nothing.”

Smith rallied against the intermittent nature of the wind power.

“Once you factor in a lot of the weaknesses of wind power — and that is one of them, the fact it’s intermittent; it’s not there when you need to rely on it — it’s amazing that this project ever made it into a realistic power plan in the first place.”

If not for IESO approving the project two days into an election campaign after the writ was dropped in a blackout period Smith said former Liberal cabinet minister and Prince Edward County resident Greg Sorbara called “a well-established practice in Ontario” in an e-mail to him, the government and consumer services minister argued “no one in this province, outside of Prince Edward County, would have ever heard of White Pines” as it would have been among 749 projects scrapped, which the government says will save $800 million.

Smith said he wasn’t worried at all about the optics.

He also named Prince Edward County as an unwilling host community while naming many who have been involved in the fight for over a decade, including the late Bill Wightman, a former MP Smith said would be “cheering at his TV” during that debate.

The legislation calls on wpd to decommission the White Pines Wind Project in accordance with Environmental Protection Act provisions and maintain lands in a clean and safe condition.

It also dictates that compensation will be payable to wpd White Pines for reasonably incurred expenses in relation to development, acquisition, leasing and construction costs; employee termination payments; subcontractor or landower losses, and decommissioning costs and other required costs to wind up the project.  No provision is to be made for loss of goodwill or possible profits.