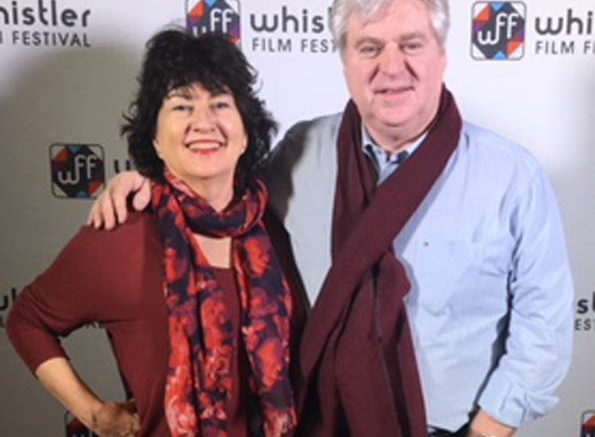 Selling millions of copies of his novels and winning the prestigious Arthur Ellis Award for the best novel of 2009, Linwood Barclay has clearly mastered his art form.

Now, he’s taken his writing in a new direction and it all started in Prince Edward County upon the meeting of two former Toronto Star colleagues who now have homes here.

Barclay recalls having dinner with award-winning film director Gail Harvey in Wellington. She’d asked him if any of his books had not yet been optioned for films and Barclay recalled that he knew just the work he wanted to see on the big screen.

“I said I thought Never Saw It Coming was a great story,” he said, adding that Harvey then asked if he’d be willing to write a screenplay if she could find the money to shoot — which she did. “This movie all began in the county one night while we were having dinner,” he told the Gazette. “It’s been less than three years. The movie was made around February or March… Given how things work in movies, it was relatively quick. I’ve been involved in other projects that went on and on before they finally died.”

Barclay said the Never Saw It Coming screenplay is the first he’s ever done. It’s also the first of his books to go to the big screen. His book, The Accident, was the subject of a six-part television series in France and he’s been looking at his Promise Falls series as a possible miniseries.

The accomplished novelist found he took a liking to writing a screen adaptation.

“I think it’s actually easier. You’re not writing pages of back story. You’re stripping away everything in the book down to its essence. I had a lot of fun doing it.”

Unlike most movie adaptations, Barclay said joked “I couldn’t blame anybody but me” if the story deviated from the book. He also said that in working with the Promise Falls trilogy, he’s actually been the one proposing changes, stating that writing for the screen has given him different perspectives and ideas he’d wished he thought of originally.

Never Saw It Coming features Keisha Ceylon, a bogus psychic who was a minor character in a novel Barclay wrote 10 years ago. He explained one of her cons is to see someone in the news who has a relative missing, approach them and say she has a vision of what may have happened and make some money selling the vision.

In this case, she bit off more than she could chew.

“A woman has disappeared and Keisha goes to see her husband for her little sting. Her vision happens to be a little too close to what really happened. Now, Keisha is in deep, deep trouble,” Barclay explained, adding the husband knows more than he lets on.

“It’s an out-and-out thriller,” he said. “Some of the reviews said very nice things, like it was somewhat Hitchcockian with a lot of twists. You think it’s going one way and it’s really going another.”

Barclay said Harvey did a great job bringing the story to life. The film premiered at the Whistler Film Festival and was nominated at the New York’s SOHO International Film Festival as the Best World Showcase Feature Film. It will have its theatrical release at Toronto’s Cineplex Cinemas Yonge-Dundas Aug. 17, but Barclay, Harvey and producer Marina Cordoni decided to bring it home first.

On Aug. 11, there will be a special screening at the Regent Theatre as a fundraiser for the theatre and for 99.3 County FM. There will be a special reception with the author and director in the upstairs lounge at 6 p.m. limited to 50 patrons at a cost of $40 each. There will also be a showing at 7:30 p.m. followed by a question-and-answer session. Tickets are $20, available through www.theregenttheatre.org.

“This is the one I’m most excited about. It’s the one my friends can come to,” he said. “We thought, ‘wouldn’t it be great? We love the Regent and said if there’s any place we’d love to see this open it would be at the Regent.’”

He credited 99.3 County FM radio personality Lynn Pickering for behind-the-scenes work to make the showing possible. Both beneficiaries were thankful for the idea.

“We are thrilled and thankful that Linwood and Gail have offered to host this special evening. As county residents, I know they recognize the contribution both 99.3 County FM and the Regent Theatre make to this community,” Deb Simpson, the general manager of the volunteer-run radio station said.

Added Regent general manager Neil Shorthouse: “This year marks the 100th anniversary of The Regent and this will be the launch of our year of special events to go from this summer to next. We’re very pleased, particularly, to have local content and this one-of-a-ind event; a sneak preview of a major film.”

Barclay said he wasn’t certain where the film would go after the upcoming screenings, whether it would go to television, a streaming service, or a run in theatres. He said he’s just pleased to know it will hit the screen at Picton’s historic theatre. The producers will ultimately decide what becomes of it in the future.

“I just write it. Someone else can figure that out,” he said.