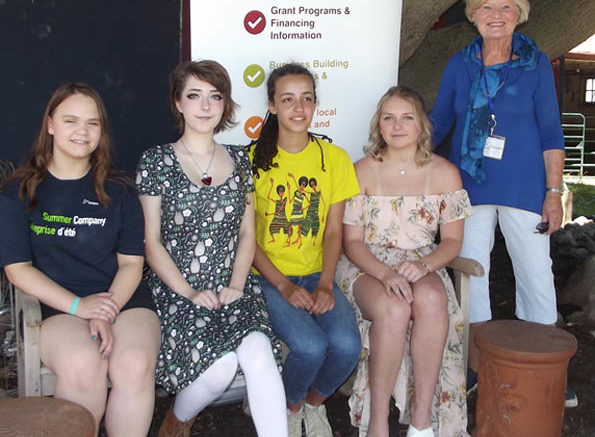 Summer showcase - Four students involved in the Summer Company program were at The Local Store last week Pictured from left are Payton Cherneskie, 17, of Deseronto; Mackenzie McGuire, 18, of Belleville; Adey Singer, 15, of Belleville; and Anna Grace Murphy, 18. of Napanee. Elizabeth Bygrave, right, is from The Local Store.. (Terry McNamee/For The Gazette)

Students given funding, advice to make their own start-ups work

People who have the idea that young people are not willing to work hard and create opportunities for themselves obviously haven’t met those taking part in Summer Company.

This provincial program, now in its third year, is hosted locally by the Quinte Small Business Centre. It gives students between the ages of 15 and 29 who are returning to school in the fall start-up financing and professional mentoring so they can create and run their own small business during the summer.

This year, there were 12 spots available in the counties of Prince Edward, Hastings and Lennox & Addington and the cities of Belleville and Quinte West. Four of the successful candidates were at The Local Store near Bloomfield on Wednesday, July 18, to set up booths advertising their services and selling their original products. All agreed they were getting a lot of interest from visitors to the store.

The youngest of the four at just 15 years old was Adey Singer of Belleville. She was selling her original comic books, which she calls Adey Abeba Comics, as well as prints of individual comics.. Adey said drawing comics is her passion.

“It’s just something I always liked to do,” she said. “It’s a combination of drawing and writing.” Adey, who is entering grade 11 this fall, said she hopes to make a career as a comic book artist, and after graduating from high school, she plans to study both comic art and fine arts. Her distinctive work can bee seen on her web site at adeyabreba.wixsite.com/comics.

Recent high school graduate Mackenzie McGuire, 18, who is also of Belleville does original artwork and will be studying video game design when she starts college in September. She was selling original drawings at her booth, called Imagine That.

“I do a variety of art,” Mackenzie said. “Mainly I do animé art or the smaller versions which are called Chibis. Those are my main styles.”

She accepts commission, as well as creating 3D models using virtual reality as custom pieces for people, and even makes costumes and cosplay accessories.

Eighteen-year-old Anna Grace Murphy, another recent high school graduate, is from Napanee. Her summer business is Anna Grace Videography. She does videos of a variety of events from weddings and business advertisements to adventures. It’s her second year with Summer Company.

“Last summer, I went to a family friend’s wedding and made a video as a gift,” she said. The next thing she new, people were asking her to create videos of their events, and her business was born. She said she has quite a few bookings for the summer and plans to keep doing it each summer when she is home from college. She also does still photography. She can be contacted on Facebook under the name Anna Grace Videography.

However, this will strictly be a summer occupation, since she will be studying massage therapy as a career.

Deseronto resident Payton Cherneskie, 17, will go into her last year of high school this fall. Her business, Heavenly Handmade, includes a wide assortment of items which she makes herself.

“I do custom orders, premade signs and jewelry, woodburning, metal stamping and glass etching,” Payton said. While mostly self-taught, she said her mother, whom she calls “really crafty,” taught her to paint and make signs.

Payton explained that every young entrepreneur chosen for the program had to submit a sound business plan outlining what they wanted to do as their Summer Company.

The event was attended by Susan Smith representing MPP Todd Smith, Elizabeth Bygrave representing The Local Store and Sandy Abbott, one of the business advisors for the Small Business Centre in this area.

“The program gives would-be entrepreneurs a chance to see what it’s really like running a business — making all the decisions, working long hours, solving the unexpected problems, managing the money, Abbott explained. “Help and guidance is provided, but at the end of the day, each business owner is responsible for their own level of success. It’s very different than working for someone else and taking home a guaranteed paycheque.

“Many businesses continue after the summer is over and school has resumed. Some producers of jewelry and crafts, who were selling at markets all summer, start selling online. It takes a new strategy and brings in new customers but it can be very rewarding financially. Others offer their services weekends throughout the fall and resume service in the spring. This is true of several past participants who launch lawn care and landscaping businesses. And some choose to close the business and head back to school, better for the experience.”

Abbott said each student receives start-up expenses, earns money all summer running their business and after returning to school they receive an additional $1,500.