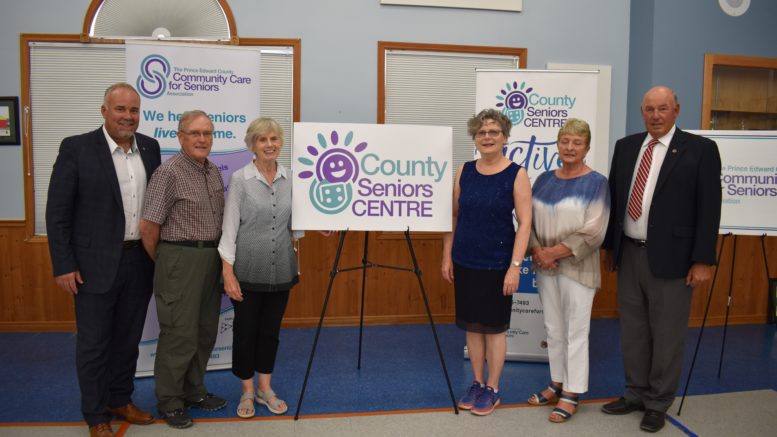 A NEW LOOK, A NEW DAY- The CountySeniors Centre will is a multi-site social and recreational outreach program under the auspices of the Community Care for Seniors Association that will be coming to a Town Hall near you. Pictured at Friday's logo unveiling at North Marysburgh Town Hall are (From left) Bay of Quinte MPP Todd Smith, Community Care Director Ken Laycock, past president Marg Werkhoven, Executive Director Debbie MacDonald Moynes, President and Chair Barb Proctor and North Marysburgh Councillor David Harrison. (Jason Parks/Gazette Staff)

On Friday at the North Marysburgh Town Hall, CCSA announced the establishment of the County Seniors Centre, a multi-site outreach initiative that will offer a plethora of social and recreational programming in the various town halls throughout Prince Edward County.

Tai Chi, meditation, gardening, yoga, cooking, photography, water colours, dance and healthy aging seminars are just some of the programming that will be offered throughout this geographically dispersed community which is Ontario’s second oldest by percentage of aged residents.

“We’re really excited about today’s announcement,” CCSA executive director Debbie MacDonald Moynes said. “The (CCSA) have a 41 year history of serving seniors in Prince Edward County and this is a new way of helping seniors living at home.”

The County Seniors Centre concept was born out of last year’s consultation with the Municipality where challenges facing seniors in this community were identified and discussed.

A subsequent grant application was made by the CCSA to the Ministry for Seniors and Accessibility that would bring programming to the outlying communities in the county.

In her remarks, CCSA Community Care board chair Barb Proctor said her fellow board members and CCSA staff had been preparing for this day for months.

Late in 2017, the association recognized an opportunity to accomplish a primary goal laid out in the CCSA strategic plan that called for the expansion of programs and services in order to reach a broader sector of Prince Edward County seniors.

The CCSA applied one of 40 grants available through the ministry to expand capacity and deliver the type of social and recreational older adult programming that addresses both the physical and social needs of seniors and offer it closer-to-home than ever before.

As part of the grant application process, the municipality offered in-kind usage of the community halls in Ameliasburgh, Hillier, Athol, South and North Marysburgh, et cetera and that unanimous decision by Prince Edward County Council makes up the 20 per cent of municipal complement in terms of annual budget, a requirement for any successful application.

“This project will provide programs that promote healthy aging with close access for all Prince Edward County seniors. A Seniors Centre also enhances the goal of having an age-friendly community and we thank the mayor and Prince Edward County council for seeing the value of this initiative and participating in the reality of our plan,” Proctor said.

Community Care staff were alerted in May their application had been approved however the funds were frozen prior to the election.

Despite the pause, the CCSA board approved staffing and programming decisions to commence and Bay of Quinte MPP Todd Smith congratulated the group for having the foresight to start the ball rolling prior to an official announcement.

Smith brought congratulations and greetings on behalf of Minister for Seniors and Accessibility Raymond Cho and Minister of Health and Long-term Care Christine Elliot on Friday and said CCSA was an vital organization in Prince Edward County.

“I appreciate that you took that leap of faith when the new government took over and we were examining everything,” Smith said. “Minister Cho was able to get that funding flowing and it’s made today possible.”

Smith added CCSA was making sure that all seniors living in the large and sprawling community of Prince Edward County get the services that are so vital to them.

With nine different hubs about to come online and provide programming so close to home, Smith couldn’t wait to see the kind of positive impact the County Seniors Centre would have.

“I look forward to the difference it’s going to make in the lives of the seniors,” The MPP added.

Acting mayor and North Marysburgh councillor David Harrison said seniors staying active and being a part of the community was a benefit to Prince Edward County as a whole.

“We know seniors want to stay in their homes as long as possible, but that poses different challenges for those living in rural areas,” Harrison said. “We often take into account the physical requirements of seniors but the mental health aspects of aging in a rural area can sometimes be forgotten.”

As the CCSA has identified social isolation amongst seniors as a growing problem, the County Seniors Centre will address this issue through services and activates at municipal halls such as the North Marysburgh Town Hall.

“For so many years these halls have fostered growing communities and have stood as a place for us to gather and connect with one another so it’s very appropriate we are moving in this direction with these municipal facilities,” Harrison added.

MacDonald Moynes said the new brand incorporates the traditional purple and teal that the CCSA uses and also features the letters C and S and the graphics invoke warm emotions.

The programming at the County Seniors Centre is available to members who pay an annual membership fee of $25.

This is part of the requirements of the Seniors Centre that have been established across Ontario.

“The selling of memberships is a whole new thing for us but the Ministry has certain requirements and we have to follow the senior centres act,” MacDonald Moynes said. “One of the budget lines is a membership fee.”

Some programming will be included with memberships fees while other programs will be offered through a nominal charge to cover the cost of instructors.

“We are going to work to keep it all very reasonable,” the Executive Director added.

Programming is expected to start in earnest in September and applications are being accepted by CCSA now.

For a membership application form and a full schedule of upcoming social/recreational programming see the special page on the website at www.communitycareforseniors.org , like the Facebook page (search for County Seniors Centre) or drop in at 74A King Street in Picton or call 613-476-7493.