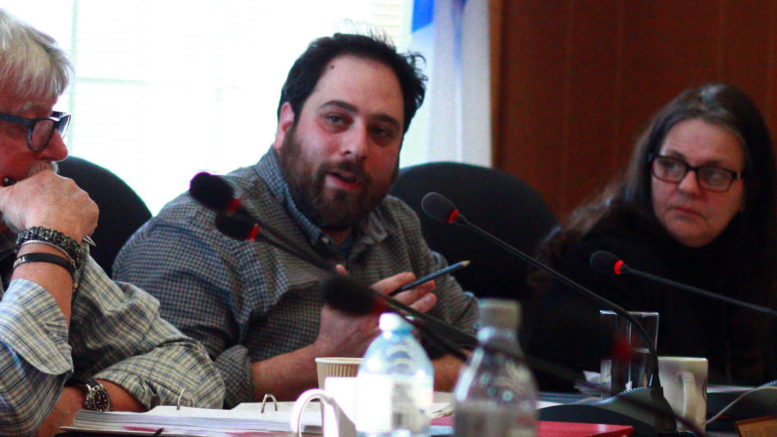 Picton councillor Lenny Epstein will be among the group of current council representatives who won’t seek re-election in October.

Epstein told the Gazette that, due to a combination of factors including the time commitment, he decided not to run in 2018.

“It’s just not feasible for me to do it right now,” he said. “My circumstances in my life have changed since I got elected and I’m not in a position anymore to be able to do it and to be able to do a good job at it and put in the time I think it requires.”

Epstein said he looks forward to being able to spend more time with his family after departing council in December.

Regardless, spending four years representing Picton was an amazing experience, he said. One of the reasons his decision not to run came down to the wire was because he felt strongly about the position.

“I did get a lot out of it,” he said. “You have a vote at the table and that’s a rare thing. I’ve felt really appreciated, it’s been meaningful, it’s been frustrating as well at times — just the speed at which things move — but I could see myself, at a different point in my life, going back at it again.”

Overall, it was a positive experience and just because he won’t be returning as a councillor doesn’t mean Epstein won’t be involved in the community. He said there are issues — such as affordable housing — that he’ll continue to support and push for action on.

“I wouldn’t be surprised, over the next few years, to see me come and make a deputation here and there,” he said. “One of the reasons it’s been hard to step away is because there are some major issues that I think we’re taking strides on and [wanting] to be able to see them moved further ahead.”

The filmmaker and performer recently took on a new role with the Quinte Arts Council. He said he’s excited to be able to continue to advocate for the arts. He’s also a member of the local improv comedy troupe Taste That! and has plans to pursue other interests including standup comedy.

While nominations closed on July 27, there are some newcomers who will challenge for seats on Oct. 22. As a first-time councillor wrapping up his term, Epstein said it’s important for newcomers to try to be good listeners and try to be solution-oriented.

“Be out in the community as much as you can be, but it’s also okay to make time for yourself and your family and to make that sacred,” he said. “It’s important to try to find the balance because this job can be pretty all-consuming.”

Moving forward, Epstein said he would like to see the next council give more consideration to increasing the remuneration level for councillors.

“If we want to have diverse representation that represents all segments of the population, we need to pay a living wage so people can focus on this job and give it what it requires,” he said. “I would like to see that discussion happen.”

While he acknowledged it’s always difficult for elected officials to decide their own rate of pay, he feels the community should take a hard look at the issue.