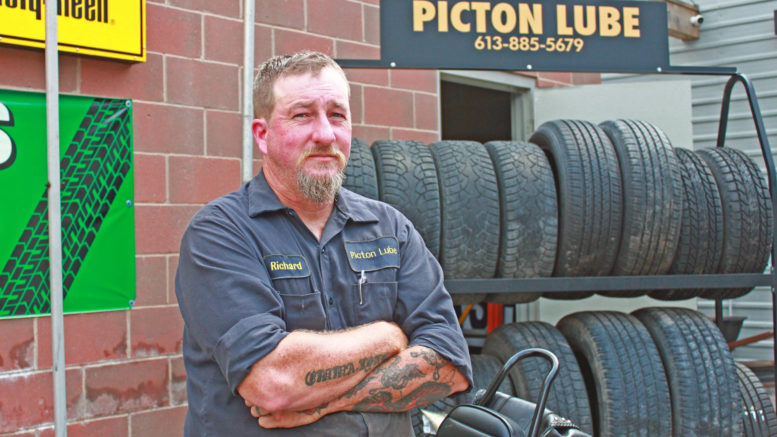 Richard Whiten is hoping to earn the municipality’s highest elected office this fall.

The Picton resident filed his nomination papers on July 26 and will face current Ameliasburgh councillor Dianne O’Brien and current South Marysburgh councillor Steve Ferguson in the race for mayor on Oct. 22.

After moving to Prince Edward County in 2002 Whiten worked a number of positions in the county, including as a supervisor and foreman, mostly in the construction industry. He is the current owner and operator of Picton Lube.

“I’m new to this whole political thing,” he said.

While Whiten doesn’t have any past municipal experience, he was a member of the parent council at Queen Elizabeth School and believes he can bring skills developed as a supervisor and business owner to the mayor’s seat.

“I’m used to doing things on a shoestring budget, not usually having the funds to accomplish goals easily, and I’m used to making things work,” he said. “I’m not afraid to stand up for what I believe in and I tend to always work in a leadership role in just about everything I do.”

Whiten suggests he is a perfectionist who tries to work as efficiently as possible.

He said it was frustrations with municipal policies and practices that prompted him to run for mayor.

“I’ve seen things that I think could be improved, better policies could be made to implement different things to make things better for the local community,” he said. “Just from my experience, things I’ve seen, people I’ve talked to, the County seems to work against a lot of people rather than for them and I believe local government especially should be working for the people.”

He said policies around affordable housing are one example. He said another has been the municipality’s approach to roads and infrastructure repair. One sticking point, in particular, is County Rd. 49.

“It’s going to our hospital, it should be a decent road, but right now it is incredibly rough as anybody who has to travel out that way knows,” he said.

He also suggested the municipality and its residents would be better off if council focused more on securing steady tax revenues from the tourism industry. He feels this can be accomplished without hurting the industry, which he acknowledged is one of the most vital components of the local economy.

He said he’d also like to look into more regulation on things like Airbnb. He said it’s not fair that more traditional accommodations in the county must meet certain regulations where the short-term rentals don’t.

“Airbnb should be at least inspected or registered to make sure they’re meeting the same sorts of regulations,” he said.

Whiten feels overall municipal efficiency could be improved and suggested that all departments should be scrutinized to find those efficiencies.

To Whiten, the biggest issues facing the municipality today are affordable housing and the effect Airbnb has had on the local housing stock as well as County Rd. 49 and other roads infrastructure.

“These are issues that I feel should have been dealt with four or five years ago minimum,” he said. “Nobody seems to have looked to the future or where the county was going.”

He argued that looking at studies from as far back as 2012, the issues should have been identified and dealt with.

He said at the current rate, people can’t afford to live and work in the county.

If elected, Whiten said his short-term goal would be to push for an assessment of the efficiency of municipal departments.