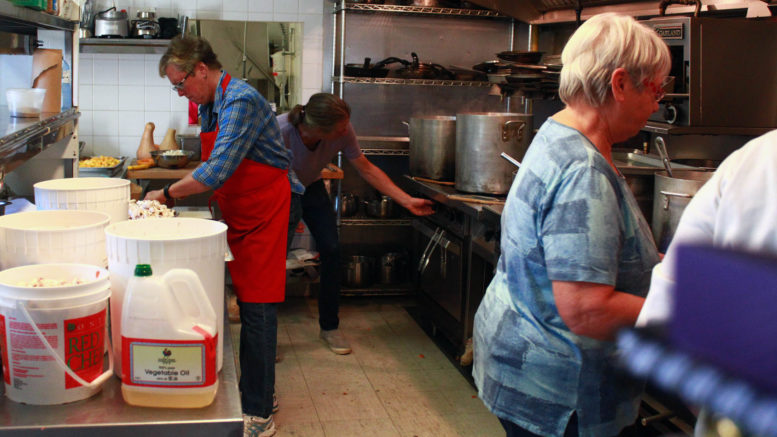 Food to Share is looking for the municipality’s assistance in the fight against food insecurity.

The organization, which hosts cooking classes and uses local produce to prepare and distribute meals to local food banks, sought council’s consideration for a reduced cost to use local community centre kitchens, as well as in-kind use of the Picton arena kitchen and the Crystal Palace for their annual fundraising dinner on Thursday, Sept. 20

At their July 26 meeting, committee of the whole referred the request to staff for reports on the cost of reducing the rental price for the kitchens and for the in-kind use of the space for the event.

Food to Share began with an Awesome Foundation grant in 2015. Since then it has produced over 7,000 meals using 40,000 pounds of locally-grown produce with the help of five farmers and more than 100 volunteers. The organization is also in the process of becoming a registered charity.

“All the money that’s raised goes toward food containers, rentals of venues — there are no paid volunteers, so every dollar goes towards fighting this injustice,” he said.

However, he said the organization missed the last round of community grants and has no funds to offset the rental cost for this year’s fundraising event. He asked councillors to consider allowing the organization to use the space in-kind. He also requested a staff report on the possibility of reducing the cost of using the kitchens in the Wellington and Picton community centres.

Wallis told councillors Food to Share has been working diligently with other groups in the municipality to address the food insecurity issue.

“All the groups are doing their best to fight this food insecurity problem in the county,” Wallis said.

In the short term, Wallis said, Food to Share is looking to streamline operations by establishing permanent kitchens. He said in Picton one such location has been established at the Rick Hotston Centre. The organization also utilized the Ontario Agri-Food Venture Centre in Colborne last year in an effort to produce more food.

“We would like to scale-up our food prep, which means getting access to other kitchens in the county and that’s really what today’s ask is all about,” said Wallis. “Longer term, I think the county is ripe for a community food centre where people can share meals, cooking and teaching can go on, and on a long-term basis, and not be subjected to the short-term restrictions we have right now and potentially have a market for produce.”

Wallis said a reduced cost to use the community centre kitchens would help Food to Share and other groups in their fight against food insecurity.

Several councillors voiced support for Food to Share and committee supported the motion to have staff bring forward the reports.