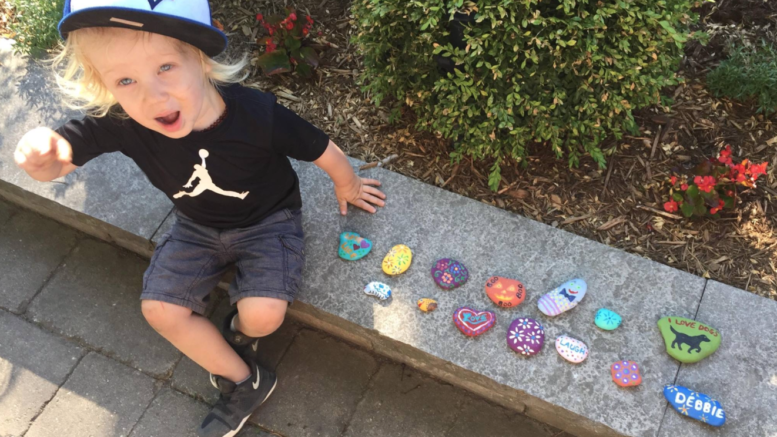 WHAT A FIND- Romeo Bellissimo shows off some the painted rocks he found at Picton's Cenotaph earlier this month. The PEC Rocks Facebook page has over 1,000 members that regularly hide scores of colourful rock creations all over Prince Edward County. (Facebook Photo)

It was an early summer day like any other in Prince Edward County.

Your humble scribe was sauntering through Andrew and Emily’s No Frills in search of some soft drinks to quench a Sunday thirst when something was spied.

Out of the ordinary or different tends to appeal to this corner and, there, sitting atop a case of a dozen cans of Canada Dry was a rock.

But this wasn’t just any rock. 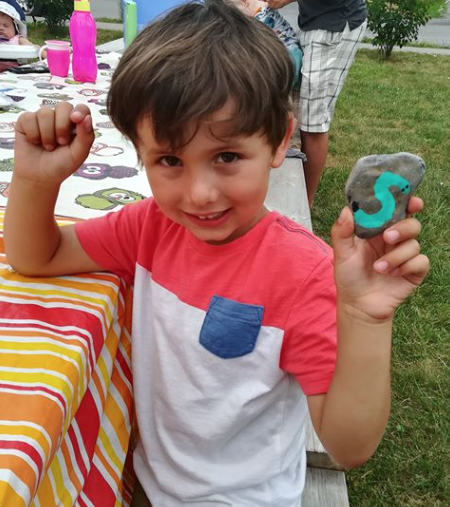 The young visitor from Quebec City shows off the rock he found at Wellington Park in mid-July. (Facebook photo)

It was a starry stone, a painted pebble with multi coloured dots on a glossy black background that had been carefully placed on its perch, ready to be discovered by a passer by.

On the back of the rock was a written notice for the finder to register their discovery on the PEC Rocks Facebook page and this scrivener certainly obeyed that command.

And thus, a discovery of a different kind took place and an infatuation with hiding and discovering painted rocks all over Prince Edward County was born.

With 1,000 members and growing daily, PEC Rocks is a social media concept for Prince Edward County that was actually brought here this spring by a local snowbird.

Alexandra Stringer said her mother Ianthe Burnett-Stringer was out walking one day and discovered a painted rock on St. Simon’s Island off the coast of Georgia.

“She flipped it over and found that it said ‘SSI Rocks, check us out on Facebook’” Stringer told the Gazette. “She visited the page and thought that was the coolest idea ever and it would totally work in Prince Edward County.”

The two started on the PEC Rocks facebook page when Burnett-Stringer returned to the county this spring.

On a Sunday in June, after the couple had designed, painted and sealed several dozens of rocks with various designs from artistic and delicate to cartoonish and campy, the pair set out for all corners of Prince Edward County, leaving the rocks in both highly visible and obscure places.

Then, Alexandra came home and set the Facebook page status to live and waited for the discoveries to start rolling in.

Slowly at first, but by early July the page started to take off as more and more people-from grandmothers to tiny tots- started to get in on the fun.

Lately, more than two dozen posts show up on the Facebook page in any 24 hour period, either recent discoveries or batches of rocks that are about to be cast into the community for anyone with sharp eyes to find. 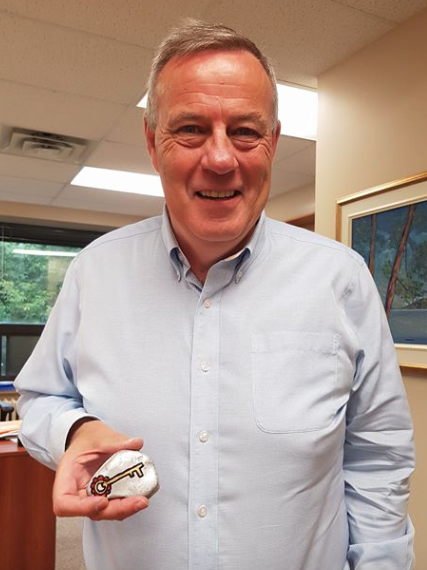 Whether it’s the thrill of discovering a painted rock some where while hiking around Point Petre or getting your creative juices flowing and painting a unique creation to hide somewhere and waiting for that initial discovery, there’s an aspect to PEC Rocks that seems to appeal to everyone.

“It’s really an activity that young and old are taking part in and I think that’s why it’s gotten so popular so quickly,” Stringer said.

A third grade teacher and her students painted a batch of rocks and hid them just before the end of the school year while some of the group’s -ahem- ‘senior’ members get just as big a kick out of finding and re-hiding rocks judging by their Facebook posts.

And it’s not just limited to local residents.

“We had a family from Cherry Valley and one of the members now lives in New Jersey,” Stringer explained. “She took the rock with her when she went back home and is going to hide it there. There were visitors from Tennessee that took a rock from Picton and were going to hide it on their way back home, so our group has gone international.”

Visitors from Quebec have also posted their discoveries with several Prince Edward County rocks getting hauled to La Belle Province.

Hiding, re-hiding and keeping rocks are all part of accepted practices for group members and, of course, the sharing of finds on Facebook is encouraged but Stringer asks that rocks are not placed on private property or in stores or businesses without the appropriate permissions first.

Several business-inspired rocks have been discovered and companies with social media awareness have embraced both the practice and free advertising.

The first of its kind in the Quinte region, the PEC Rocks group has spawned other groups in the area.

“I can’t believe it’s gone this viral this quickly,” Stringer said. “There’s groups now in Quinte West and Belleville and Napanee that were inspired by the PEC Rocks page so where we were inspired by the St. Simon’s Island page, we’ve been able to inspire other people in the Quinte area and that’s really awesome.”