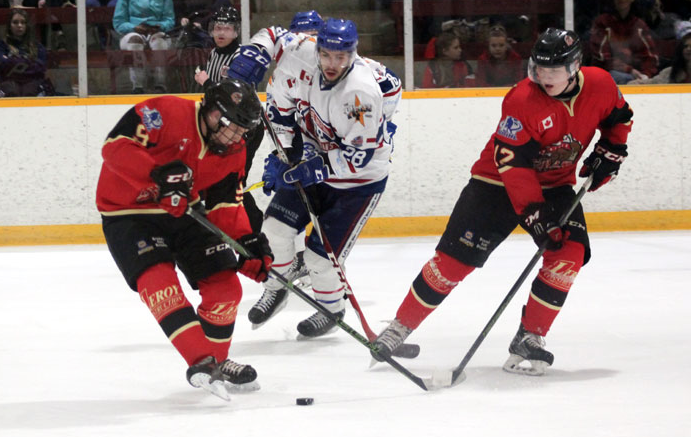 The Wellington Dukes continue to add size and skill to their lineup prior to the defence of their 2018 Buckland Cup championship.

In recent days, the Ontario Junior Hockey League defending champions have acquired a hulking winger, a slick puck moving defenceman and a pair of skilled forwards. Most recently, Wellington picked up Peterborough native James White from the Rayside-Balfour Canadians of the Northern Ontario Junior Hockey League.

At 6’4” and 209 lbs, White can offer both size and skill in front of the opposition’s net and is a graduate of the Central Ontario Wolves AAA program.

In another deal late last week, the Dukes acquired Brett Humberstone and Kris Lalonde from the Smith Falls Bears.

Humberstone, 18, is a Victoria, BC native, played 58 games for the Bears last season, potting a pair of goals while adding 18 helpers.

One year Humberstone’s senior, Kris Lalonde is a Central Canadian Hockey League veteran with 163 Jr. A games to his credit.

In a pair of moves in mid-July, Wellington said goodbye to one forward and added another.

Centreman Graeme McCrory was sent to Newmarket after one season in Wellington.

In 52 games last season, the rookie had a pair of goals and added 10 helpers.

A native of Kanagawa, Japan and graduate of the Quinte Red Devils, Suzuki had seven goals and nine assists in 53 games for the Cobourg Cougars in his first OJHL season.

All the recent additions were added for future considerations and/or player development fees.