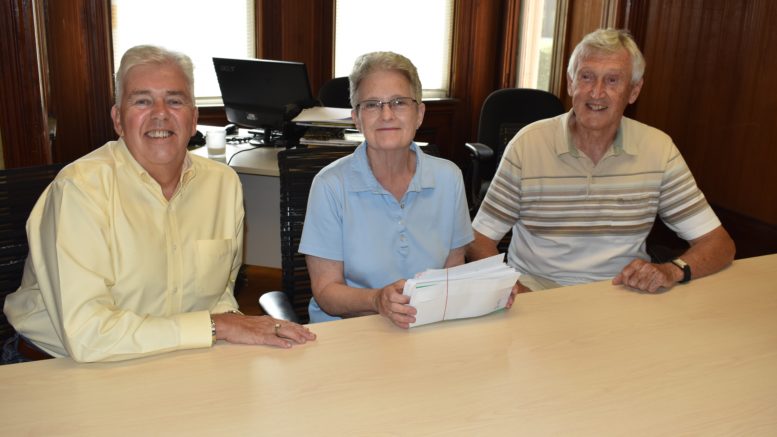 The community continues to speak out for those who no longer can.

The 100 People Who Care group presented over $11,000 to Glenwood Cemetery officials Monday as the local philanthropy concern chose to donate its quarterly gift to restoration efforts at Picton’s ‘City of the Dead’ after vandals desecrated over 100 stones and monuments in late June.

In total, 153 marble and stone monuments and 20 pioneer monuments were toppled or broken in a daylight act of mischief on June 20 and, without insurance, the families and the cemetery have been left to try and repair the damage which is conservatively estimated at over $150,000.

“Through tragedy and sadness you find out who your friends are,” 100 People founding member Mark Davis said. “There are lots of friends of Glenwood Cemetery”

In just over a month, the community has banded together to support Glenwood by way of donations, organizing benefit concerts and offering volunteer hours when restoration efforts get underway.

And now, the 100 People group have each written a $100 cheque to support Glenwood in their darkest hour of need.

Glenwood Chair Sandra Latchford said Prince Edward County is a community that cares deeply and the volunteer board of the cemetery is finding out how much each day.

It’s wonderful that people care so much about the cemetery and preserving families and history in Prince Edward County,” Latchford said. “Most all Prince Edward County residents have family there as so many families are connected through the years but even if you don’t, we are all part of one big human family.”

Latchford said the Board was pleasantly surprised when she heard the news that member Chris Rodgers had put forth the restoration efforts as a cause the 100 People group would support and thrilled to find that the collective had voted in favour of restoration efforts.

Latchford said inventory has been completed and staff are documenting the devastation through digital photographing.

The chair hopes some of the restoration will begin prior to winter although coordination between the monument companies, the Hydro One boom truck and volunteers will be required to be completed weeks in advance.

“Hydro One has donated the use of their boom truck and that will make it more efficient and cost effective for sure but we need to know who will be available when and it map it all out,” Latchford added.

Glenwood treasurer Fergus Millar added the Board deeply appreciated all the offers by volunteers to re-erect and repair the monuments but these efforts needed be be coordinated and done under the supervision of officials and monument companies.

“We know they are eager and full of vim and vigour but these monuments are very, very heavy and we don’t want to find a volunteer lying underneath one of them,” Millar said. “It’s really wonderful that the number of people that have stepped up and offered to help.”

Latchford added that some families have already pledged to help with rehabilitation efforts but some of the stones are from founding Prince Edward County stock that have long since moved away from this island community.

“Some of the names are family names that you just don’t hear in Prince Edward County anymore,” Latchford said.

For a complete list of damaged stones and monuments, please visit http://glenwoodcemetery.ca/list-of-damaged-monuments/