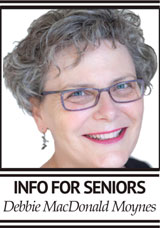 In 2016, nearly seven in 10 Canadians participated in outdoor or wilderness activities.

Some 22 per cent of Canadians aged 15 and over reported that they had gone either canoeing or kayaking in the 12 months prior to being surveyed. There are 915 marinas in Canada in December 2017. The total freshwater area in Canada is 1,169,561 square kilometres. Canada’s coastline is 243,042 km the longest in the world.

Summer might bring home maintenance needs to the fore. If that’s something you need help with call Community Care and ask about the home maintenance program. We have carefully screened workers available to help seniors with inside and outside work including in your garden and cutting grass.

If you have your sandals on and your feet, toes and nails are not as nice as they should or could be, then call about the foot care clinic closest to you. A half-hour visit with a nurse who is trained in foot care can do wonders for how your feet look and feel. Thinking about activities for seniors? Get involved in the County Seniors Centre programs at a cost of $25 per year per person. Check the Community Care website for a complete list of upcoming programs.

The Community Care office will be closed for the Civic Holiday, Monday, Aug. 6 reopening Tuesday, Aug., 7 at 9 a.m. Hot meals on wheels will follow regular schedule and will be delivered on Monday. The thrift shop at 153 Main Street in Picton will be open for the Civic Holiday from 1-4 p.m.

Picnic in the park social

Come to Benson Park for a Seniors Luncheon Social picnic in the park Wednesday Aug. 8. The menu is a boxed picnic lunch, apple, iced tea and lemonade catered by Bill Grieve, the chef with Wheel House and Occasions catering. The cost is $10 per person.

Musical entertainment will be provided by local artists from 11:30 to 1:30 p.m. for all to enjoy in the park. Following the luncheon participants can stay and enjoy some outdoor games (Bocce ball, horseshoes, and crokinole, et cetera.) Those seniors wishing to play outside games should arrive by p.m.To register for the picnic, the games, or both call Community Care at 613-476-7493.