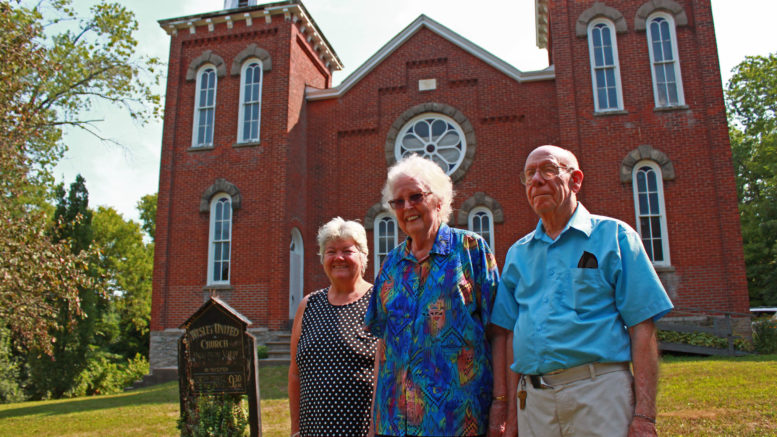 For many members of Wesley United Church, it’s been battle between heart in mind.

Constructed in 1878 and serving the community ever since, the church will close its doors at the end of September. A joint charge with Friendship United, the membership will amalgamate and meet and Demorestville.

There are a number of factors at play in the decision to close the church — changing demographics, declining membership, and ongoing costs. For the dwindling congregation, it was a choice between gutting it out and fighting to keep the doors open and understanding that the church’s time had come.

That’s certainly the case for Bob and Nora Barber, though they no longer reside in Prince Edward County. For the past five years, the couple has made the trip from Belleville to the Union Road church for worship — even though there are no less than six United churches closer to home.

It was a sense of loyalty that kept them coming.

Bob’s great-great-grandfather and great-grandfather were on the build committee of 36 that began planning for construction in the fall of 1877. The land was donated by Cornelius and Huldah Hubbs and David Sprung.

“It was the farmers that got the stone and built the foundation and that had to be ready so that in the spring when the contractor was going to start the building, it was all set,” said Nora. “The contract was $3,000 to build the building.”

Bob’s father, Stan, purchased the church’s first organ in 1955 and later donated funds to install stained glass windows which still loom above the dais. Bob played the organ there for 60 years and has been an active member for decades. Nora and Bob Barber and Nancy Wood spoke about some of the church’s history and architecture this week. (Chad Ibbotson/Gazette staff)

“I was baptized here,” he said.

Added Nora, “This is on the only church he’s ever belonged to.”

When the church was built, the area was called “the union” because the schoolhouse next door, built in 1854, was formed through the union of three school districts.

“A lot of people referred to this as ‘the union’ church,” she said.

Just below the church, further down Union Street at one time was a cooper’s shop and a small store. At the corner of Victoria Road and Hwy. 62 was a post office called Mountain View, so named for the rock outcropping visible to the west. Plans to change the layout of the local road forced the building to move closer to the church.

“They decided to move it up to here and that was when this became Mountain View,” Nora said.

It is believed Wesley United is the only twin-steepled church in Prince Edward County.

Nancy Wood has been a member of the church for 40 years. She, too, was conflicted about the decision considering how many memories were made within those four walls.

“My husband and I were married here, children baptized here, they helped out with all the dinners, were in the pageants, my daughter was married here — a lot of our life was here,” she said. “Our hearts don’t want it to happen, but our heads know it has to.”

With fewer than 20 members and operating costs of $40,000–$50,000 annually — excluding repairs — the membership realized they could no longer keep going.

“The writing has been on the wall for the last six years,” said Nora. “If our sister church hadn’t had a big bequest and was willing to spend some money on us, we wouldn’t be here still.”

The building will be sold with a team of trustees guiding that process.

“For some of us it’s been painful for the last few years,” Nora said.

Wood said with the declining membership and the level of fundraising required to continue, it was no longer feasible. She noted many other churches and service groups in the community face the same challenges.

“Several of our members already drive out from Belleville and moved to Belleville because of their age, so I can’t see the situation turning around and changing any time soon,” she said. “I think it’s the same thing all the churches are finding — the church used to be your community centre, it was your gathering place for everything, not just for worship, and that’s changed.”

While the congregations are amalgamating, Bob, Nora, and Wood couldn’t say how many members would actually make the switch. With several members driving from some distance over the past few years, they could elect to attend service closer to home.

“A lot of us aren’t going to go because it’s too far,” said Nora.

The first service at Wesley United was held 140 years ago in June. The last service is planned for Sunday, Sept. 30.