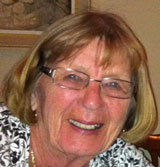 Margaret Flora “Doreen”  Hepburn (nee McKinnon)
passed away peacefully at home after a courageous battle with idiopathic pulmonary fibrosis, a disease as rare as the woman herself. Predeceased by her husband Bernard Colin Hepburn, brother Gerald Duncan McKinnon, survived by brother William John Randolph McKinnon, her children Janie (Les) Orsborne, James Hepburn and Jeanette Hepburn (Mark Schneider) and grand-children Victoria (David Ewing) and Colin Orsborne, Craig Hepburn, Alexandria and Duncan Schneider and great-grand-children Caillen and Lachlan Ewing and adored by her many nieces and nephews. Doreen graduated from Queen’s University as a Registered Nurse and enjoyed a career in health care where she served in the Picton Hospital and as a public health nurse before becoming an entrepreneur. Together with her partners, husband Barney Hepburn, brother Gerry and sister-in-law Betty they started Hallowell House Nursing home where she served as the Director of Nursing. She was a woman ahead of her time, as she co-developed one of the first nursing computer systems, and was an early adopter of technology texting and checking her iPad for news right up until her final days. Having worked hard and built a successful business from the ground up, she and Barney retired early and enjoyed time travelling in their RV, boating, tennis, trips and great friends in Florida. Doreen enjoyed sewing, knitting, needlework, cooking, bridge and painting. She was intelligent, driven, definite, a great listener and above all dedicated to her family. We were blessed to have had her in our lives during her 86 years and be present for the many valuable lessons she shared. Loving family and friends will remember her as a woman who had a great life and a wonderful time living it. In lieu of flowers, donations to the Prince Edward County Memorial Hospital Foundation building campaign (pecmhf.ca) would be appreciated. At Doreen’s request a private family service and interment will be held. Online condolences may be extended through Whattam Funeral Home 33 Main Street, Picton, ON www.whattamfuneralhome.com