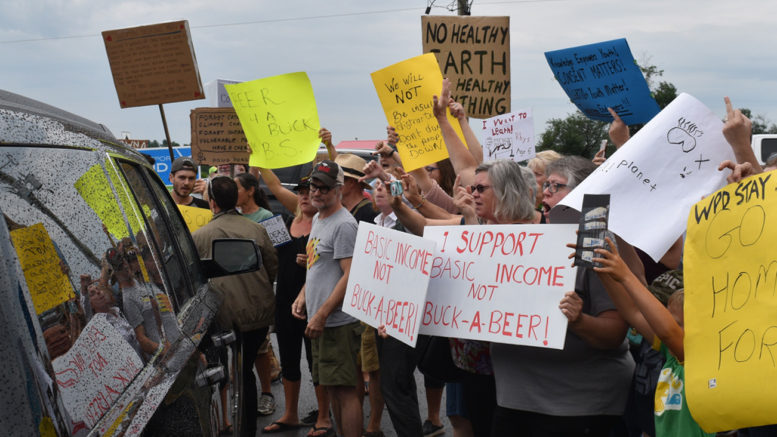 Loud and clear -Protesters give departing Ontario Premier Doug Ford a less-than-pleasant send off as he leaves Barley Days Brewery Tuesday morning. Around 75 people gathered to boo Ford and voice their concerns over the cancellation of the White Pines Wind Project and the government’s direction on climate change, the sexual education curriculum, and the basic income pilot project among other issues. (Jason Parks/Gazette staff)

Premier Doug Ford’s contingent was met with protest placards as it rolled into Barley Days Brewery Tuesday morning as he prepared to announce the lowering of the floor for beer sales to $1 per can.

Across the road from the brewery, about 15 people showed their lament for the cancellation of the White Pines Wind Project, while on the roadside just in front of the craft brewery, another 20 voiced their displeasure for the government’s direction thus far on social services, sexual education, and the environment. The numbers grew larger later that morning.

Inside the Loyalist Parkway facility in a production room packed tightly with media and supporters, Ford, Finance Minister Vic Fedeli, and Government and Consumer Services Minister Todd Smith didn’t let the demonstrations damper their announcement. They gleefully stacked cans of beer and heralded the return of “buck-a-beer” pricing.

Fedeli said questions about buck-a-beer have been a popular refrain since the June election. “Every now and then in government, you find yourself facing a really tough day, a day that requires you to make tough decisions. Well, this is not one of those days,” he said. “We’re delighted to be here with Minister Smith and Premier Ford and I think we all have one thing in common. Every single member of our caucus has the same thing in common, ever since the election one question we have heard time and time again, you can’t go anywhere without people asking ‘When are you guys going to bring back buck-a-beer?’ The good news is we now know the answer.” Ford said the “day you’ve been waiting for is finally here” while announcing that the law will change Aug. 27, in time for the Labour Day long weekend. He explained it would lower the minimum price from $1.25 and took a swipe at the previous Liberal government while making the announcement.

“Once upon a time, you could buy a beer for $1 a bottle. Consumers loved it and participating breweries loved it. It was a win-win. So, of course, the Liberals and their friends saw this and they wanted their cut, so they passed a rule to raise minimum beer prices in Ontario,” he said. “We were elected on a plan to reduce red tape and we were elected on a plan to put people first. We promised to bring buck-a-beer to Ontario.”

Ford stressed no brewers are being forced to lower prices and there will be no subsidies or handouts to encourage them to enter the market with $1 product. Instead, the government is challenging the province’s 260 breweries to bring prices down by Aug. 27. Those that do will vie rewarded with non-monetary rewards, such as prime shelf space in LCBO stores and features in LCBO magazines or newspaper inserts.

“And the appreciation they get from consumers will be priceless,” the premier stated.

he’s hoping others will follow. The premier faced questions about the potential harm of reduced beer pricing and the possibility of increased policing and health care costs. He said he trusts Ontario beer drinkers to be make responsible choices.

Ford was also asked about the government’s decision to end a three-year pilot project providing a basic income, a decision some critics have stated affects a similar demographic that the buck-a-beer promise was designed to appeal to. He stuck to his guns again.

“If you went right across the province, that would cost $17 billion. That’s not realistic. As much as I want to help everyone — and we’re doing that by reducing hydro rates, creating great paying jobs, reducing costly taxes and putting money back into the taxpayers pockets — we can’t afford $17 billion. It’s unrealistic,” he said, before asking reporters if they had any questions about beer.

Questions followed about incentives and the tax impact of the decision. Fedeli said the tax portion of beer is not being reduced and indicated the legislation does ask brewers to lower their margins.

“This is an opportunity for the beer industry to participate in the premier’s challenge,” Fedeli said. “The premier is asking the producers of beer to lower their prices down to $1.”

Outside, demonstrators were critical about the government’s priorities and messaging.

“A bunch of us have come out because we feel the buck-a-beer thing is really a distraction from much more important issues, especially when the beer was like $1.25 before,” said Christine Renaud. “Ford likes to say he’s for the little guy. Really, he’s a rich business man. He’s — I find — insulting his base of supporters by thinking they care more about beer than poverty, progressive education and other issues like that.”

Renaud said she was also disappointed in Barley Days for taking part in a stunt many other craft breweries have denounced.

Asked about the chance to engage with the premier, she said she wasn’t really interested.

“I have read all of his platforms. It’s not what I stand for and what most of us here stand for. If I did have the chance, I’d ask some of those same questions about why he thinks buck-a-beer is going to be such a great thing for everybody when there are so many more important issues at hand.”

Paul Snepsts, who started organizing the demonstration via social media, also didn’t think much of the announcement.

“They’re stunts meant to distract some of the most vulnerable among us from what’s actually going on: A dismantling of years of progress on many fronts like climate change, poverty measures and sex ed. All these things are getting rammed down our throat.”

Snepsts also said he doesn’t see a change in course coming from the government.

“Why would they? They have a majority government. They have no one to hold them to account. Any time we have the premier and our own MPP for a photo op, we should get out here and tell them we’re not happy with how things are going — already.”

The county resident also said he hoped the demonstrations would serve as a first reminder to Smith that as a member of government, he represents all the people, not just his own political party.

Demonstrators remained at the entrance of Barley Days as the politicians left. Some chanted words like “shame” and “coward” in Smith’s direction as he entered his car for Queen’s Park, while some of Smith’s supporters chanted his name and applauded him as he left.