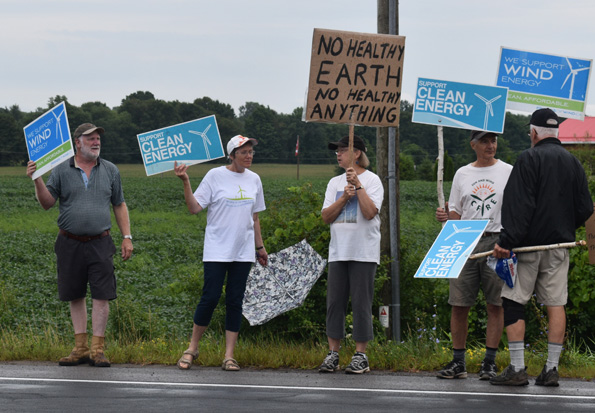 Supporters of wpd’s White Pines Wind Project were among the demonstrators lining the roadway by the Barley Days Brewery Tuesday to make their feelings known to MPP Todd Smith and Premier Doug Ford.

About 15 people were lined up along the Loyalist Parkway when the politicians arrived to make their “buck-a-beer announcement.” Spokesperson Jennifer Ackerman said the group pulled a demonstration together at the last minute after finding out about the appearance Monday and many were already working.

Ackerman, who was a landowner for the now-cancelled project, said she felt the project would have been beneficial for the community in and around Milford.

“This was going to better the lives of a lot of people around here. Now Milford is a ghost town again,” she said. “As soon as the workers stopped, there goes my business. I might as well just put my closed sign up. There’s nobody around. It brought life to Milford. We were happy. We were enjoying what we saw.”

Ackerman said she felt Smith never listened to her point-of-view and she wondered aloud whether the nine turbines would be worth the $100 million the company says it will cost to take them down. She said she had line-ups to sign a petition crafted by the non-governmental organization Lead Now against the cancellation of the project. The petition has been signed by more than 1,250 people.

Another demonstrator, Mike Platt, also didn’t feel Smith listened to his arguments or provided him with a logical reason to not support the project. Platt, who worked in the solar power industry, said he hoped to have a White Pines turbine on his property, but it didn’t materialize.

He said he believes Ontario will experience a “mini-recession” because of the cancellation. “People will recognize what happened to wpd and other investors and larger companies will think twice about entering into Ontario,” he said.

“If you’re against wind, you’re pro nuclear,” he said. “Therefore, you’re sinking the ship you’re living on. What we need is a critical mass of wind generators. We won’t be able to get it. There’s no volume control on nuclear. To shut it down takes months. Any thinking person would not promote nuclear.”

More people joined the demonstration as it went on, but by the end of the announcement a number of Smith’s supporters who were pleased the White Pines project was cancelled, including members of groups like the Alliance to Protect Prince Edward County and the County Coalition for Safe, Appropriate Green Energy were also on scene, voicing their position.