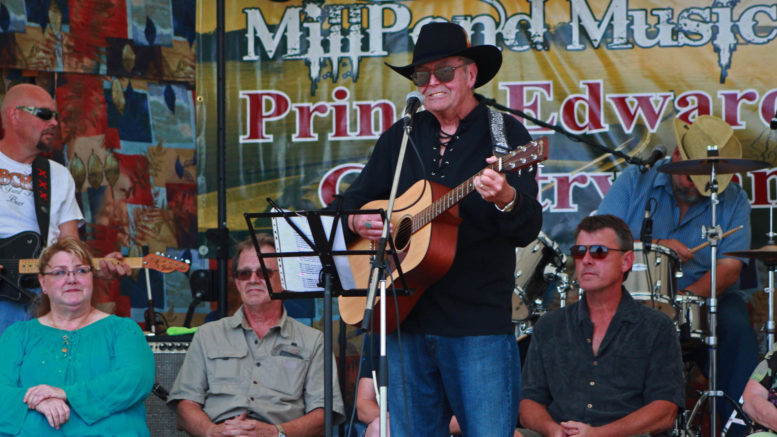 “It’s getting more popular every year, that’s for sure,” said organizer Greg Verner of Millpond Music and Entertainment.

There’s a full slate of music on all four days.

“There’s so many of them — it’s four days of jam-packed music,” said Verner.

On Thursday from 6–7:15 p.m. there will be a songwriter’s showcase featuring local talent including Jamie Pounder, Bob McQuaid, Becky Elliott and Dave Bongard. That will be followed at 7:30 with a performance from GTA country rock band Johnson’s Creek.

“They have been playing some pretty big festivals and they’re very good,” Verner said of Johnson’s Creek. “They will fit in nicely with the group.”

The day will close with The Reasons playing from 9–11 p.m.

Friday’s festivities begin early with an open mic starting at 11 a.m. That will be followed at 2 p.m. with the latest Prince Edward County Country Music Hall of Fame induction ceremony. Local legends Bud Gregory, Lorraine Sine, Renie Thompson, and Archie Wright get the call this year.

The ceremony will be followed with a performance from southern roots group Old Habits at 3 p.m. and Country Spice at 4 p.m. Wrought Iron Roots, Dean James & The Heartbreak Hillbillies, and Ramblin’ Fever will be the featured performers on Friday night.

Verner said James has been around the jamboree circuit for some time, but is young and is beginning to get some recognition in country circles.

Outlaw Tribute — a nod to Waylon Jennings and Willie Nelson — will follow at 8:30.

“They’re widely known as the best Waylon and Willie tribute there is,” Verner said of Outlaw Tribute.

Saturday’s show will close with Dusty King Jr. From 10–11 p.m. followed by a fireworks display curated by Air Artisans.

Sunday’s selection begins at 10:30 a.m. with Daughters of the King, followed by Guitar Talks at 11:45 featuring Steve Piticco, Jeremy Williams, Andy Schick, and Jimmy Whaley. The final act of the festival, Cowboys Don’t Cry, takes the stage at 1:15 p.m. on Sunday.

While he didn’t have an exact count, Verner said campsite sales were up a bit over last year. He said the show is definitely growing, but he reiterated the festival has no intentions of growing to a Havelock Jamboree-type scale.

“We just want a nice hometown country jamboree,” he said.

Those interested in camping out for the festival can book sites until Aug. 23. Tickets are $70 per person including camping.

Those who aren’t camping can purchase weekend passes or day passes at the gate. The cost for day passes for Thursday are $15, Friday $20, Saturday $25, and Sunday $10.

“There’s a lot of good things we offer here, it’s a family event,” said Verner. “We run a pretty tight ship and we make sure people have lots of fun.”