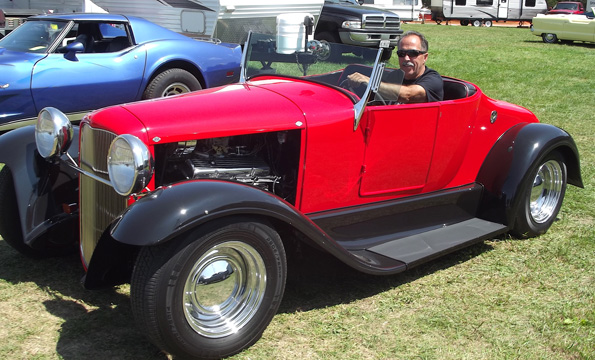 “People come from all over,” said club president Fred Morton. “We’ve had people come from B.C.” He said it’s a real family event, and they’ve had as many as five generations taking part in the show.

Morton said this year’s show attracted more than 250 vintage and unusual vehicles. He said vehicles had to have been built before 1980 or be modern “muscle cars” to qualify to enter. The oldest one entered this year was a truck built in 1927.

The perfect weekend weather also drew plenty of spectators to the free event. 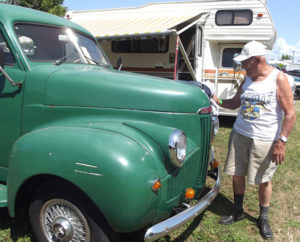 Care for a classic -Leonard Lucas, of Belleville, adds a little shine to the chrome on his 1947 Studebaker on Day 3 of the South Eastern Ontario Street Meet car show in Ameliasburgh. More than 250 vintage vehicles were on display during the 44th annual show near the shores of Roblin Lake. (Terry McNamee/For The Gazette)

“We have approximately 800 people coming in to look at the cars,” he said. “It’s a real community event.”

That community includes area businesses, who donate prizes and raffle items every year. The event raises money through entry fees paid by owners of the vehicles and through raffles. “We’re not for profit,” Morton said. “We just keep enough profit to run our building. The rest goes into the community. We usually raise about $15,000 to put back into the community.”

Some car and truck owners have owned their vehicles for decades, while others have only recently acquired the. Some of the vehicles have been restored to sparkling factory condition. Some are in their original factory paint but exhibiting the evidence of decades of use. Others have been rebuilt into hot rods or given fancy new paint and accessories, like Rick Calvert’s bright red 1927 Ford Model T. The Brighton resident agreed that Henry Ford — who famously said his vehicles could be painted any colour as long as it was black — would be horrified! But Ford would be pleased by the perfect condition of the truck.

“It runs good, too” Calvert said.

Belleville’s Leonard Lucas is proud of his 1947 Studebaker, which still sports its original green factory paint. He’s owned the car about five years and has a soft sport for Studebakers.

“When I was younger, I drove them,” he said. He said he started collecting old cars about 21 years ago. In addition to the Studebaker, he has a 1947 Hudson, which he said has a considerably smoother ride than the Studebaker. People walking past a stealth grey 1951 Pontiac Chieftain were greeted by warning barks from a pair of animated skeleton dogs with glowing red eyes. The vehicle is owned by Cory Wease of Napanee.

“Everything on this car is original except the wheels and the paint job,” he said proudly. “For being 66 years old, it’s in pretty decent shape still.”

The South Eastern Ontario Street Meet is held in Ameliasburgh every year on the second weekend in August. For more information, search for the Prince Edward Auto Club on Facebook.