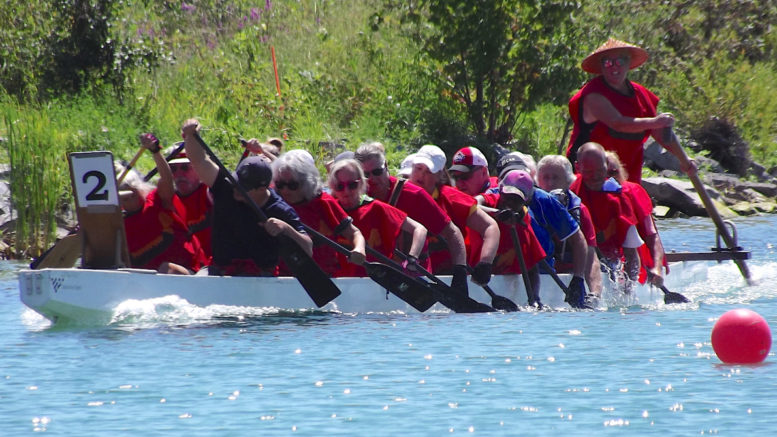 Paddling for pace - The Wellington Legion team digs in hard during their race against Community Living Saturday afternoon, while participating in the Wellington Dragon Boat Races. The festival is now in its 12th year, attracting teams from as far away as Toronto. (Terry McNamee/For The Gazette)

The dragons were draggin’ on the water in Wellington on Saturday for the 12th annual Dragon Boat Races hosted by the Wellington Lions Dragon Boat Club.

With seven boats in action, each with 20 paddlers plus a steersman and sometimes a coach, there were at least 150 people on the water, and with all their support staff, family, fans and spectators waiting on shore to cheer them on, the Wellington docks were the busiest place in town.

She said two of the teams, one from Toronto and one from Kingston, were crewed by breast cancer survivors. Belleville and Cobourg put together a combined crew to represent both communities. Prince Edward County was represented by the Top Dawgs team, which has members from across the county but is based in Wellington.

“The breast cancer teams are sponsored, but the other paddlers pay $30 apiece to paddle,” Marissen said, with the money going to the Wellington District Lions Club. “This is our major fundraiser,” she said “All the money goes back into the community.” She said local businesses have great supporters of the dragon boat races each year.

Co-chair Don Lyons, who will take over as chairman for the 2019 races, said his sons have crewed on dragon boats for several years.

“It’s just so much fun!” he said. And, while there are prizes for the winners, “Nobody takes it really seriously,” he added.

Pat Brown from the Dragons Abreast survivor team of Toronto, said an important part of the day was the flower ceremony at noon. She explained that people purchased carnations in memory of those who have died from cancer and those still battling it but who are too ill to paddle.

“We have about 100 on the team,” she said. “Not all of them are active paddlers.” She said this team, now in its 21st year, has members ranging in age from 37 to the late 1980s. The only prerequisite to become a member is to be a breast cancer survivor or currently fighting breast cancer. “We like to show people that there is life after breast cancer,” said fellow team member Nikki Hulin. “We’ve made some very good friends.”

“I’ve been paddling on and off for about six years,” she said. Ford said she started the sport after attending a dragon boat open house in Wellington, and added that the Wellington club meets Mondays and Wednesdays at 6 p.m. (newcomers should arrive at 5:30 p.m.).

“Everyone’s welcome to come out to try it,” she said. “It would be great to get the youth involved. People of any fitness level can paddle. You don’t have to be good at it! There’s always coaching available to help you learn the proper technique.”