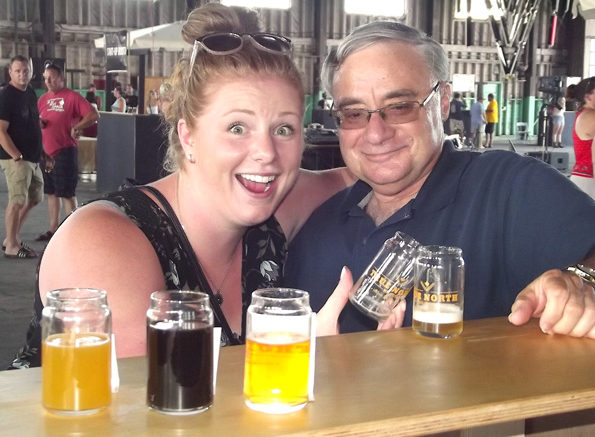 About 3,000 were on hand as touring True North festival made stop in Picton

It was a festival good for what “ales” you.

The True North Beer Festival came to Prince Edward County on Friday and Saturday, August 10-1, one of three stops for the travelling festival.

Held at the Loch-Sloy Business Park in Picton’s old airport, the event featured more than 75 craft beers from some 25 small breweries located across Ontario and attracted an estimated 3,000 people over the two days — in fact, early bird daily and weekend passes were sold out. The biggest turnout was in the evenings when live music was performed, but people also came out during the day. They also took part in a variety of games and contests ranging from Giant Jenga to beanbag tossing. The event included a Prosecco and cider bar for any non-beer drinkers who attended.

Among the local producers taking part were 555 Brewing Co. and Prince Eddy’s Brewing Co. of Picton, Strange Brewing Co. of Hillier , ther Barley Days Brewery, Lake On the Mountain Brewery and the County Cider Company. Other craft breweries came from as far away as Sudbury, Simcoe, Bowmanville and Ottawa. Many offered limited-run beers only available in small quantities.

Many visitors drove a fair distance to enjoy the festival, among them Jordan Brown and his friends, who came from Toronto for the weekend.

“We’re having a great time!” he said as he tried his hand at Giant Jenga.

Rich Kennedy, from Cherry Hill, NJ, was on holiday in the county, and decided to drop in to sample some beer.

“This is my birthday present!” he grinned.

Andrew Weel of MacKinnon Brothers Brewery, located north of Bath, was kept busy serving up samples. “It’s been a great summer,” Weel said. “The tourism industry in the Picton area has been a really big help for the local breweries and wineries.”

The Picton festival was preceded by one in Brantford in late June. The final True North event will take place in Kitchener-Waterloo on Sept. 15.