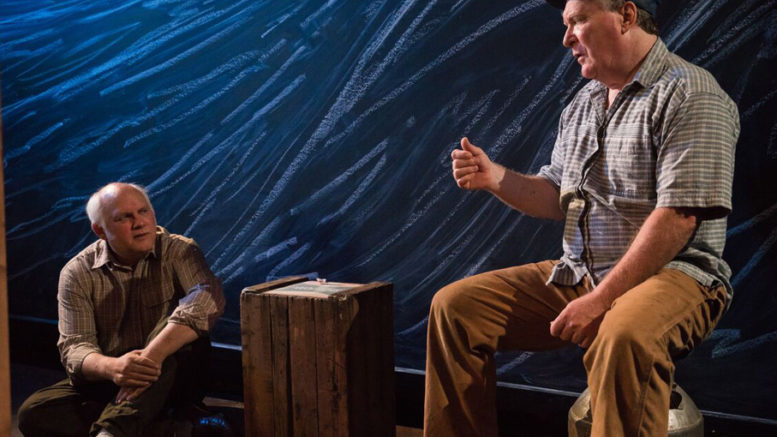 The two friends - Angus (John Dolan), left, listens as Morgan (Benedict Campbell) recites their life story, a favoured ritual until a visiting drama student shares the story and prompts Angus to question it. The Festival Players production of The Drawer Boy continues until Saturday in Wellington. (Sarah Kirby/Imagine Photography)

In several ways, the Festival Players of Prince Edward County production of Michael Healey’s The Drawer Boy is a study in fresh perspectives.

Director Graham Abbey takes a risk in selecting a show that just three years ago was performed to acclaim in the county with Prince Edward Community Theatre’s award-winning entry in the Eastern Ontario Drama League festival, but there’s several exciting reasons for audiences to see the show in a new light.

One immediate curiosity is the venue itself, Festival Players’ new Studio Theatre on Wellington’s Main Street. The 60-seat theatre puts audiences right on top of the action in Morgan and Angus’ rural farmhouse. With seating on two sides of the stage, audiences are drawn in by more of a three-dimensional portrayal that lends well to the emotion of the action unfolding.

Lighting effects, music by George Meanwell, and simple, effective blocking that plays to both sides of the audience and a chalk wall designed to look like the expanse of farming landscape help deliver the realism that allows one to get lost in Healey’s powerful storytelling.

The introduction of a new perspective also carries the story on stage. Morgan, a gruff farmer ably played by Benedict Campbell, who really looks the part, and his companion Angus (John Dolan), a man who suffered a brain injury after being hit with shrapnel in a Second World War bombing raid, live comfortably with the monotony of farm chores and a comfortable story about their friendship that Morgan repeatedly offers.

One day, an enthusiastic young drama student, Miles (Marcel Stewart) shows up on the farm fresh from Toronto hoping to learn about rural life. He eagerly soaks up the chores Morgan offers him — often providing comic relief with his incredibly naivety — but soon, he becomes an unwelcome guest in Morgan’s eyes.

Miles’ eagerness to chase a story for his performances leads him to poke his head into places Morgan advises he’d be best to leave alone and, in doing so, he stirs Angus to ask questions about everything he holds true.

Suddenly, his newfound perspective, prompted by Miles, threatens to unravel everything the two friends hold dear and it leaves the foil Miles and the audience members deciding just where they might want to point fingers given the secrets revealed.

In all, it’s a thrilling three- hander. Campbell makes Morgan a tough character to like and that sets the stage for the audience to go on a cliffhanger ride while never leaving the farmhouse.  Dolan does well with a difficult character, showing the simplicity of Angus and stays true during an incredible tribulations. His portrayal is fascinating to watch. Then, Stewart offers powerful expression and intonation, both as a giddy newcomer and a character who has to quickly grow a strong spine to challenge Morgan and delve into the secrets that unfold before his eyes. Casting is really a strength.

Whether one is familiar with The Drawer Boy or not, they’re going to be compelled by an excellent performance in an imaginative layout. The show is not one to be missed. Stage manager Barry Cook, set and lighting designer Steve Lucas and costume designer Lindsay Forde are also to be recognized.

The run of The Drawer Boy at the Studio Theatre continues with 7:30 p.m. performances tonight, Friday, and Saturday. There will also be a 2 p.m. matinee Saturday. Tickets are available through the Festival Players box office at boxoffice@festivalplayers.ca, at 613-476-1991, or the Studio Theatre, 310-312 Main Street in Wellington.