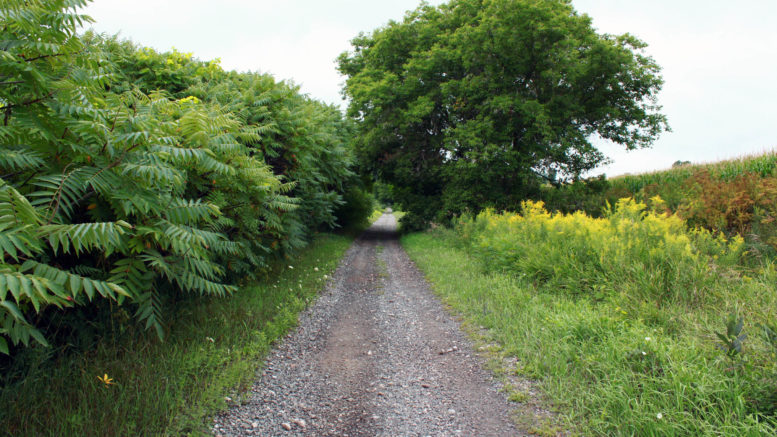 After twice tendering for the work and receiving higher than expected bids, it appears the municipality will take a novel direction in the effort to restore the Millennium Trail.

On Thursday committee of the whole supported a motion that would cancel the tender issued for the Millennium Trail rehabilitation. The motion would also establish the Millennium Trail rehabilitation ad-hoc committee for the purpose of facilitating the capital project as approved by council. The motion would appoint current Prince Edward County Trails Committee members Barry Davidson, Patrick Maloney, Amy Bodman, and Vincent de Tourdonnet to the committee.

The motion will come before council for approval on Aug. 28.

Davidson appeared before councillors at their Aug. 16 committee-of-the-whole meeting to speak in support of the move. 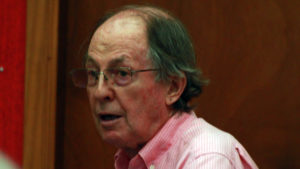 Barry Davidson will use his expertise to help guide the rehabilitation. (Chad Ibbotson/Gazette staff)

“I ask you to approve the plan to be presented to get this recreation and tourist asset realized,” he said as the meeting got underway.

Vice-chair of the PEC Trails Committee de Tourdonnet also spoke in support of the proposal. He called the trail a “remarkable resource.” While a lot has been said about the benefit the upgrade would have for cyclists who want to use the trail, he said those benefits extend to all users.

“In my mind, I support this project because this is going to provide an opportunity for people to get from one community to another by whatever means they choose,” he said. “…There are parts of [the trail] that an older person can’t safely walk on right now, there are big rocks, there’s loose gravel, this is not just about cycling.”

He said the PEC Trails Committee is a group that “can make things happen.”

The municipality purchased the 53-kilometre former rail line back in 1997 for use as a multi-purpose recreational trail. In 2011, Davidson said, he was speaking with the owner of the Bloomfield Bicycle Shop about the condition of the trail. In its rough state, it wasn’t much good for cycling. With Davidson at the helm, a Wellington Rotary project saw the restoration of approximately 11 km of the trail near the village.

“After the Wellington project was completed, I started the PEC Trails Committee to continue the trail improvements,” Davidson said. “My long-term goal is to connect the Millennium Trail with the Trans Canada Trail north of Hwy. 401.”

During 2017 budget deliberations council pledged $370,000 over three years to complete the remainder of more than 40 km. The PEC Trails Committee committed to raising $80,000 toward the project, but support for the restoration of the trail surpassed expectations and the group has raised $120,000 to this point.

“When tenders were issued last fall and this spring, the lowest bids were far higher than the budget numbers and much higher than the costs that I incurred doing the Rotary project,” said Davidson. “Even allowing for inflation and deeper surface treatment, the tenders are not acceptable.”

A staff report presented to committee of the whole on Thursday says in November 2017 staff issued a request for tenders for a unit price for resurfacing a 13-km section of the trail. The municipality received five tenders, however, even the lowest tender exceeded the budget estimates. The tender was not awarded. The work was tendered again in 2018 with a different approach. This time staff set a project budget of $285,000 and asked bidders to specify the number of kilometres that could be resurfaced with the budget. Again five tenders were received. The greatest distance received was from Cooney Excavating Ltd., who suggested that figure could cover 10.65 km of trail. After considering those costs, staff decided to propose an alternative.

Davidson volunteered to continue the project as he did in Wellington with council’s approval. He would begin work immediately to bring the improved trail from Wellington to Picton to start and would seek to finish the rest of the trail by the end of next year. Davidson feels the remainder of the trail can be completed for the budgeted and raised funds.

The report says the Millennium Trail rehabilitation ad-hoc committee could co-ordinate the rehabilitation work through the use of volunteer resources, County ad-hoc pricing for qualified contractors, and through material and labour donations. As a formal committee of council, the ad-hoc committee and its volunteers would be covered by the County’s general liability insurance. Proper health and safety and construction supervision training would be provided to volunteers and all County policies for procurement and volunteerism would be adhered to. County parks and outdoor facilities supervisor Tanya Delaney and construction supervisor Garrett Osborne will also sit on the ad-hoc committee.

Engineering, development, and works commissioner Robert McAuley said as proposed the new group would be somewhat different than a traditional ad-hoc committee. He said while the ad-hoc committee would allow the group to take advantage of things like the County’s liability insurance, workers’ compensation protection, and ability to use volunteers in an organized manner, staff didn’t want the ad-hoc committee to be encumbered with bureaucracy.

“This intent of this group is not a conventional ad-hoc committee,” he said. “If it is intended by council that this takes on some kind of recommendation role or some kind of administrative or commitment role, it will fail. The intent of this committee is to get [the rehabilitation] done.”

He said the committee will not be required to produce reports and make recommendations like a typical ad-hoc committee.

The municipality is taking a calculated risk in going ahead with this approach, he said.

“There is a bit of a leap of faith we’re taking,” he said. “These individuals have already demonstrated they are able to put an equal amount of kilometres together at a reduced cost compared to what our tenders were telling us.”

He said even if the ad-hoc committee runs into higher costs, there’s a long way to go before they reach the costs indicated in the tenders.

“It’s fair to give them a chance to try to deliver at a lower unit cost, even if it’s higher than what they did the last time,” he said. “As far as the rest of the trail will go, can they stretch it to 40 km? I think that has to be demonstrated, but certainly, it’s going to be more than the tendered 10.65 km we have on the table.”

Councillor Kevin Gale supported moving ahead with the rehabilitation. He feels its the municipality’s obligation to upgrade and maintain the trail and he congratulated staff for taking an approach that can effectively use volunteers.

“This is long overdue, this is something we should have done years ago with projects to eliminate bureaucracy and red tape, not worry about risk and liability, and get some things maintained in the community,” he said.

Councillor Jamie Forrester said while he’s always supported the Millennium Trail and keeping it as a public asset, he couldn’t support spending $370,000 on the upgrade. He said he was also concerned about the long-term maintenance costs.

“This is $370,000 of public money,” he said. “There are parts of the trail that I think can be upgraded to the standard we’re looking at — through Picton, through Bloomfield — but there are a lot of areas of that trail that are basically out in the middle of nowhere.”

He said the maintenance costs could be insurmountable and, at the same time, there are roads in the county that could use those dollars.

“I can’t even get the sides of my roads brushed,” he said.

There are no plans to alter the usage of the trail and it would remain multipurpose after the upgrade.