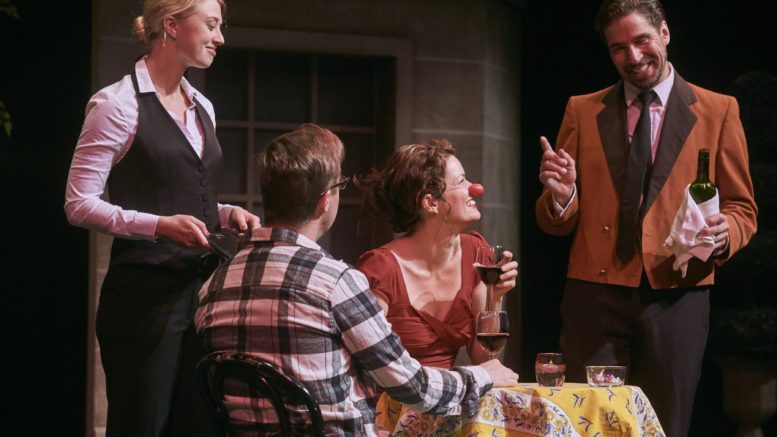 Making acquaintances - Christy Bruce, centre, stars as Mimi in Blind Date, a structured improv that has her character going on a blind date with an audience member. It opens at the Regent Theatre Aug. 22. (Submitted photo)

Actress given 90 minutes to make a connection with a stranger

For some, going on a date at the Regent Theatre will take on a whole new meaning over the coming weeks — rather than seeing a show, one lucky patron each night will have a chance to be the show.

That’s the premise of Rebecca Northan’s Blind Date, a show that will see its 700th performance during its run with Festival Players of Prince Edward County from Aug. 22 to Sept. 2.

Leading lady Mimi, played by Christy Bruce on most nights and by Northan herself on select nights, has been stood up by her date, and she must find someone to spend 90 minutes with. Mimi and members of the show’s crew then mingle to pick the perfect company to share the stage.

“We ask in the lobby, there’s people who have a spark and we’re interested, there’s something about them,” Bruce said. “If we get that person relaxed enough, they don’t feel like they have to perform. If we wanted actors, we would just hire people, but that would be too much work.”

Having played the role of Mimi for six years, Bruce said she can usually scan a crowd and find two or three people almost immediately who would be right for the part.

“We’re looking for people who are reluctantly playful, not too eager, but who say ‘Yeah, OK, that might be fun,’” she said. “The whole show is about honouring and celebrating these people.”

In addition to touring with Blind Date across Canada and in London’s famed West End theatre district, Bruce has extensive improvisational training having worked with Calgary’s Loose Moose Theatre and Toronto’s Second City amongst other stage and television credits.

She said this production is a bit different than working with a professional improviser, so sometimes the role of Mimi — who wears a clown’s nose as a way to break the ice — requires her to take the lead and shepherd her date forward, while still being mindful she has a theatre of paying customers hoping to be entertained.

“A large part of the job is communication, asking great questions, supporting and being there for someone else.”

With some volunteers, that’s a more difficult task, but Northan has scripted in enough controls for Bruce to use to move the night along.

“We always say that we bring a big colouring book and the date chooses how to colour it in. Sometimes they go way out of the lines and the show goes in an entirely different direction,” Bruce said. “The whole thing is structured improv, so the show is protected. We can’t have a completely off-the-cuff show without having a structure. It’s always different and the dates are completely different.”

The premise, Northam once said in an interview with CBC Radio, is that everyone is loveable. Bruce added her orders for filling the role — one Northan reportedly hasn’t consented to allow many others to play — are to take care of her date, to find those loveable qualities, and to bring them out. No jokes are at the date’s expense.

“The show has been running for eight years and no one has ever regretted doing it,” she said. “We’ve had some gentlemen that have said ‘no’ in the lobby that have wanted a do-over, but once you see it, it’s kind of done.”

Bruce believes the show allows for realistic emotion to creep in. Like all first dates, she said there are awkward moments and the anticipation of where the date’s going to go and whether the parties might kiss, hold hands, or plan to go out again. Sometimes, she even said she gets caught up in the emotion.

“You have to go in there with such an open heart. The job of Mimi is to connect with that person on however many levels as we can, so there’s obviously a connection…. but when you turn the lights off, and I take my nose off, they go back to their partiers and I have my own life. We go back into the real world.”

Given that role, Bruce did say that much of the authenticity she brings to Mimi comes from her own life experience. She said each Mimi brings some of her own stories that shape the performance.

“We bring so much of ourselves into the role. If we’re asking our date to be open and tell stories, it’s only fair that we’re open and honest too.”

One misconception Bruce wanted to clear up was that no date will be chosen against his will or his own partner’s will. In the initial consultation, they’ll be asked if they want to be placed on a “maybe” list. If they consent, they won’t know if they’ve been selected until someone is called.

Often, given the positive light they are depicted in, the dates receive quite an audience reception.

“If we pick a single guy, it’s like bees and honey, they always get phone numbers,” Bruce said.

She added they will reunite a date with his wife or girlfriend at the end of the show. While that might seem a bit uncomfortable, Bruce said she’s had experiences where it has rekindled a spark for the couple.
“I remember one wife said ‘We’ve been married 34 years and this reminded me why I fell in love with him in the first place,’” she recalled.

Show dates and times and ticketing information is available online at www.festivalplayers.ca, via telephone at 613-476-1991, or in person at the Regent Theatre box office.