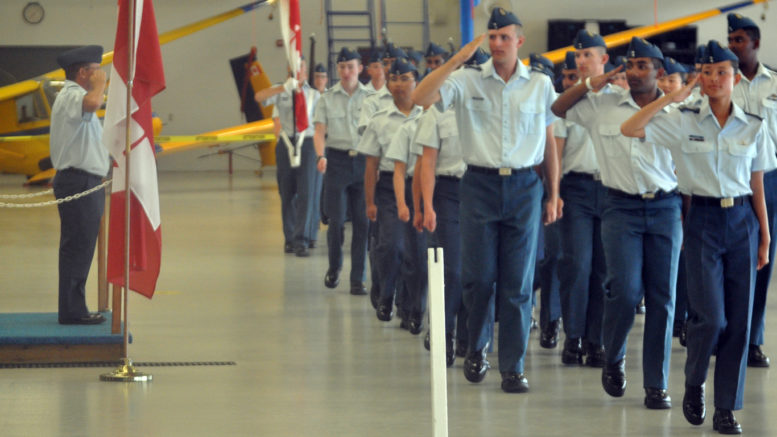 Nearly 70 Royal Canadian Air Cadets were on the parade square at CFD Mountain View Friday for an annual summer rite of passage in Prince Edward County: The Wings Parade, which signifies completion of glider pilot training.

The cadets have been hard at work in the classroom and in the skies over the past six weeks on a scholarship course at the Central Region Cadet Flying Training Centre. They each experienced the thrill — and perhaps, fright — of being towed into the air for their first solo flights.

Unfortunately, not all of the cadets were able to celebrate the completion of the course at the parade. For the second consecutive year, high winds limited the number of flying hours available to the cadets, forcing some to stay behind after their culmination event to shuttle between Mountain View and the Picton Airport to log more hours. It was hoped they’d get their wings within the week. 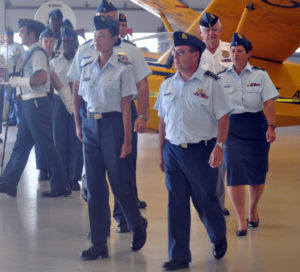 The cadets were able to parade in front of a well-accomplished reviewing officer, Lt-Col. Steve Camps, who is the first commanding officer of 8 Operations Support Squad based in Trenton. Camps has been a member of the Royal Canadian Air Force since 1989. He has flown missions around the world, including Operation Airbridge and Operation Enduring Freedom, and oversaw operations at Camp Mirage and Kandahar during the Afghanistan conflict.

Between his own experiences as an airman and those of his own son, Ryan, who was successful in achieving his wings during last summers’ course, Camps was able to appreciate the cadets’ accomplishments.

“Today is an incredibly special day you will all remember for the rest of your lives. I am incredibly proud of all of you. For the past six weeks, you have all worked very hard to get two this point,” he said.

Camps called the course “very intensive,” reminding dignitaries and family members on hand that those chosen from Air Cadet squadrons across the region due to their promise spent their summer putting in six days of work with both academic and flying course. He added while getting their pilots wings was a primary goal, much more was learned.

“You’ve seen the dedication required, the extra hours, the commitment to excellence, and the ability to push on — even though you are exhausted — to meet your goals,” he said. “You have made friends who have had the same experience as you, which has undoubtedly created bonds that will last a lifetime. Whether or not you go on to a career in aviation, whether or not you continue to fly gliders in the Air Cadets, whatever you choose in the future, you will benefit from your experiences this past summer.”

Camps also took a moment to speak to the young men and women who didn’t have that proud moment of getting their wings gallantly in front of a full hangar. He said his son was in the same position last year and their predicament is no fault of their own, nor of their instructors.

“You should also be justifiably proud of how far you’ve come in these past six weeks,” he said. “You have overcome the same challenges as your course mates here on parade today and you certainly will have put in the same effort. Rest assured the staff at Mountain View and at 8 Wing Trenton will continue to do everything possible to ensure you go forward and receive your wings before the summer is done with.”

In closing Camp commended the cadets for demonstrating dedication, work ethic, and maturity beyond their years and thanked the staff for their efforts to keep cadets safe in the ski.

“Never underestimate the level of trust placed in all of you for the safety of these cadets. The parents hand their child to you for the summer for them to embark on a great adventure and achieve something very few ever achieve, to learn how to fly a glider. You have done an exceptional job this summer.”

Following the presentation of special awards for top cadets and instructors and after a march past to the music of the Trenton CTC Band, Air Cadet League of Ontario governor Stephen Moody spoke of the special relationship between the league, the cadet program, and the Royal Canadian Air Force.

“We’ve got the gliders, they’ve got the staff — the military does — during the summer. They also do the familiarization training during the year. They do a great job and we help with the airplanes and buying things like engines for the Scouts,” he said, adding sponsors across the province help provide facilities to support that training.
“It’s a wonderful arrangement,” he said.

Moody also credited commanding officer Lt.-Col Robert Burns and his staff for the investment of time and energy they put into making the program a success each year.

Again in 2018, there was some local Prince Edward County flavour among the cadets on course. Aaron Wiik, who received his wings last summer, returned as a staff cadet. The PECI product continues to train as a pilot and has applied for acceptance at Royal Military College. Also, Cobourg cadet Jack Philip was among those to receive his wings Friday. He spent some of his childhood living in Picton.