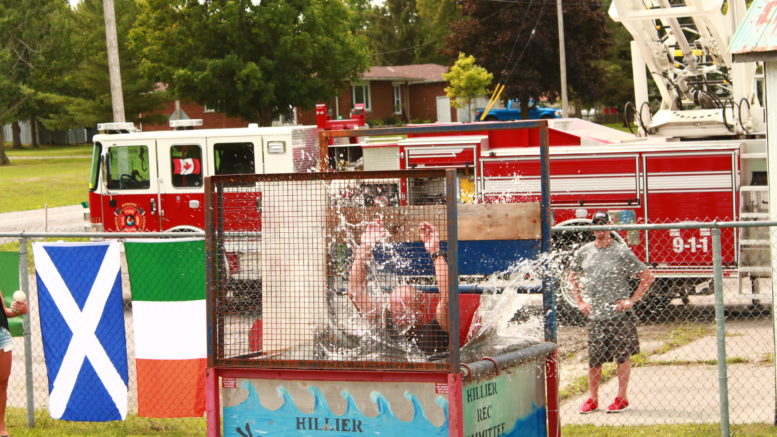 The return of the Hillier Highlanders had audiences captivated at this year’s Hillier Park Day.

Hillier Highlander Padraic Moore, lead organizer of the games, said both this year and last some of the top competitors from 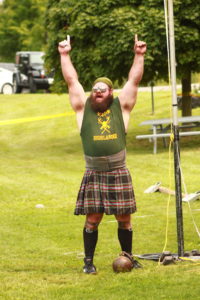 Ontario were in Hillier for Park Day. Moore himself is a nationally-ranked highland games athlete who is currently sixth in Canada. He’s also ranked the 10thstrongest man in Canada. Athletes Austin Sztajdocher, Joe deWitt, Brian Pennell, and Jon Cavanagh faced off against Moore in Saturday’s games, which featured aspects of both highland games and strongman competitions.

The games began with stone put, where the athletes attempted to push an 80-pound stone the greatest distance. That was followed up with weight for height, where the competitors tossed 56-pound weights over a bar of increasing height. Later, the athletes took turns deadlifting a car.

Kids were invited to test their own mettle with tug-of-war and strength and agility testing.

“They’ll be getting prizes and having fun with all of that stuff too,” Moore said.

He said it’s been great to work with the Hillier recreation committee on the family-focused event for the past two years.

Councillor Steve Graham said the Hillier recreation committee worked hard again this year to put on a fun, family event and were happy to welcome back the highlanders.

“It takes a lot of work to put this together,” he said. “Hillier is a spread out area so the idea of this event is to try to bring people all together and have a community event that’s free of charge.”

Graham noted kids could also visit a petting zoo with a pygmy goat, geese, ducks, sheep and more. He said it was just nice to be able to enjoy Jack Taylor Park.

“I think we pulled it off and, for a rec committee, it’s not always easy to do that,” he said. “We got the support, we’ve got a lot of helpers here.”

Graham said it was great to bring everyone together and is important to have events with minimal cost involved. All the events were offered for free with a small charge for food and drinks. Graham also encouraged anyone who’s interested in getting involved in the recreation committee to reach out.