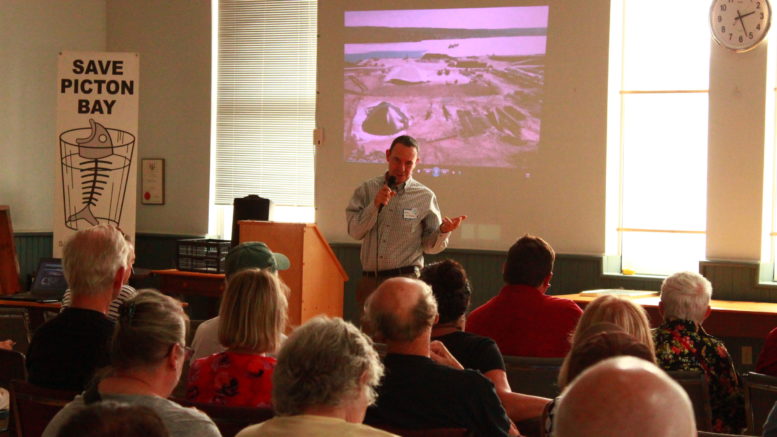 Save Picton Bay and their legal counsel believe there is a strong case to appeal a recent court decision regarding the legal, non-conforming designation at Picton Terminals.

Back in June, Superior Court Justice Wolf Tausendfreund found that Picton Terminals can continue to operate their trans-shipment deep port operation finding that — at the time the municipality’s comprehensive zoning bylaw came into effect in 2006 — the portion of the property became and remains a legal non-conforming use. However, Tausendfreund did order Picton Terminals to remove materials and equipment from an eastern portion of the property designated rural residential, which Save Picton Bay saw as a victory.

In the initial court case, Save Picton Bay challenged the position that the operation constituted a legal non-conforming use.

“What the court said quite a number of years ago is if you are doing something and the law changes, it’s not really fair to say you can’t do that anymore and that’s this term legal, non-conforming,” Save Picton Bay Lawyer Eric Gillespie explained.

Gillespie said the distinction being contemplated in the appeal is whether or not Picton Terminals should be allowed to conduct all operations permitted under the pre-2006 zoning, or just the operations that were actually being undertaken prior to 2006.

“It is true that back in 2006 when the zoning changed that they had permission to do all kinds of things — it was a very broad permission, all kinds of activities could take place,” he said. “The evidence, we believe, strongly pointed to the fact that all they were doing was shipping some salt. The case law says you should be allowed to continue what you’re actually doing, not what you could do.”

Additionally, Gillespie argued another thing that still must be determined is the size of the area within the Picton Terminals property that is zoned rural residential.

Gillespie said there’s no date for the appeal at this point, but he anticipates it could go forward this fall.

Save Picton Bay member Victor Lind said the group isn’t opposed to Picton Terminals’ operation, but want to ensure the operation is run sustainably and that pollutants aren’t getting into Picton Bay.

“This all comes back to land use,” he said. “If they’re permitted to do these things without checks and balances than it’s very difficult to reign them in. What we’re asking for is proper zoning.”

Picton Terminals recently plead guilty and was subsequently fined $27,500 for contravening the Environmental Protection Act as the result of a 2016 discharge of petroleum coke. In February this year, the Gazette reported the site had also been investigated for a possible breach under the Fisheries Act due to uncovered salt piles and seepage water containing salt entering the bay.

At that time the port operation indicated plans for a covered salt storage building were in the works.

Lind said he doesn’t want anything getting into the bay that can affect the municipal water supply or marine ecosystems. However, the judge’s ruling means the operation continue to ship bulk goods including salt and petroleum coke.

“He left all the environmental issues to the regulators,” Lind said.

Lind said residents continue to have a number of issues with the operation including environmental concerns, noise, and light pollution.

The Ontario Municipal Board (OMB) recently became the Local Planning Appeal Tribunal (LPAT). Where the OMB had heard arguments from both sides before making decisions, the LPAT will determine whether a proposal meets official planning rules. If not, it will be sent back to municipal councils for a decision. The tribunal won’t make planning decisions. Lind said that means local councils will have more power.

“They can’t kick the can down the road to the OMB, they have to make a decision,” he said. “I’m hoping when [Picton Terminals] come back for rezoning the community will have a say.”