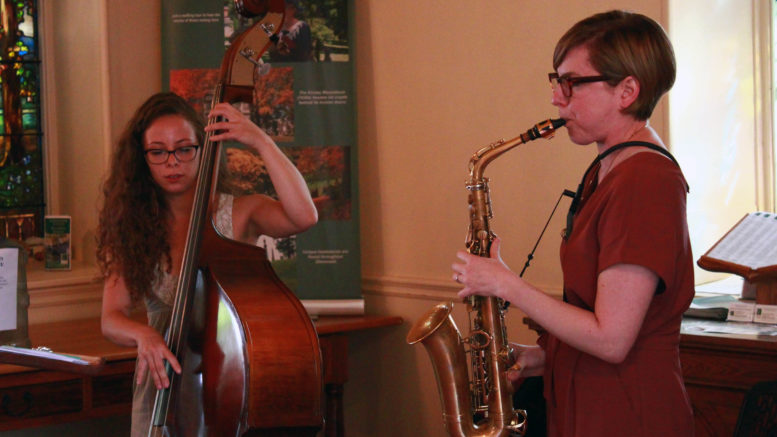 If the Prince Edward County Jazz Festival has a lasting impact, organizers hope it will be the festival’s strong community building amongst young artists.

Festival creative director Brian Barlow said he was thrilled with how well the event went this year. He said while the final attendance numbers weren’t yet available, anecdotally the week’s events appeared to be very successful.

“The Regent Theatre numbers were really great every night,” he said. “We certainly hit the marks that we were looking for. We will compare those [numbers] to other years, but I think the numbers are going to be very good.”

One of the biggest highlights of the week for Barlow were all of the younger musicians who participated. Those included Laura Anglade, who is from Montréal and attended the festival for the first time. Barlow said her concerts were very well-received. The rising young star for this year, Emily Steinwall, was spectacular as well, he said.

“She’s a great singer, a great saxophone player, and a wonderful person to work with,” Barlow said of Steinwall. “I got to play with her every day and I got to know her really well and she was a real highlight for me.”

He said cultivating relationships with young performers and inviting them back to perform is one of the most important things the festival has been able to do.

“In the long run the legacy of the festival will be that work with young people,” he said. “They really appreciate it; I hear from all of them that they feel a part of this family, they feel part of a community out here now which is really great.”

Marika Galea, who performed Saturday morning at Glenwood Cemetery chapel along with Tara Davidson, is another performer who started with the festival as a youth. Galea first performed at the festival while in high school. She’s since lived and worked in Montréal, New York, and Boston, and played with some very well-known musicians. She was back this year as a main-stage performer.

Last year’s rising young star, Andrew McAnsh, was hired by Robi Botos to join him on stage this year.

“Robi is really doing well, he could choose any trumpet player from just about anywhere, but he chose Andrew McAnsh,” Barlow said. “That’s just such great continuation of this work that we’re doing and that shows that this music has a great future.”

The concert at Glenwood Cemetery was particularly meaningful this year, Barlow said. During the performance, those in attendance were invited to donate to restoration efforts at the site following a recent spate of vandalism.

“It was great for us to be able to be there and have it packed,” he said.

The festival has been able to build positive relationships with local businesses throughout the years. This year, the festival was especially effective in that regard, Barlow said.

“This year we connected way more in a way that really made me happy,” he said.

For example, The Vic Café organized all of the food for the green room this year and provided live jazz each night on their patio in front of the Picton Library. The arrangement worked great for both parties.

“We have those relationships with just about everybody we work with,” Barlow said.

The Old Third Vineyard came on board this year and had a very successful concert on Sunday. The Mill PEC restaurant in Consecon also joined the festival’s slate of satellite venues this year. Both sites indicated they’d like to be involved again next year.

“The Old Thirds wants it every Sunday,” Barlow laughed.

The festival ticked off a lot of boxes this year in terms of community building and work with young performers. It’s also resonating with audiences. One interesting thing that has begun to happen, Barlow said, is that visitors who plan to return next year book rooms at local bed and breakfasts and other rental accommodations in advance.

“They get people who come out here to the festival and, before they leave, they book rooms for next year,” he said. “We have two places already in the county that are sold out bookings for next year for rooms during the jazz festival.”

Planning for next year’s jazz festival gets underway almost immediately.