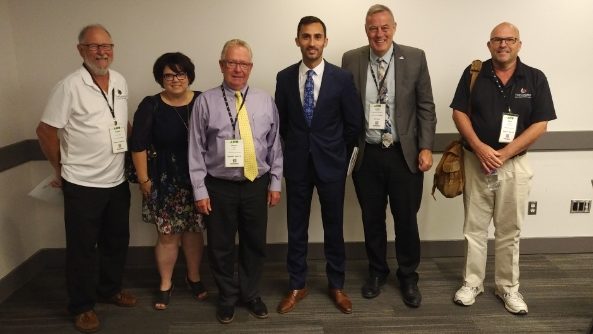 Education, infrastructure, and Airbnb were all topics of discussion as a delegation from Prince Edward County met with ministers during this year’s Association of Municipalities of Ontario annual conference this week.

While the conference was slated to run through Wednesday, Mayor Robert Quaiff spoke to the Gazette Tuesday morning to outline the delegation’s activities to that point.

On Monday morning the municipal delegation met with Minister of Education Lisa Thompson where the parties discussed the County Food Hub at Sophiasburgh Central School. The local representatives noted that volunteers have been hard at work and have raised approximately $800,000 toward the project, leaving about $45,000 left to raise. Quaiff said the news appeared to be well-received.

“I was pleased to see there was an individual sitting at the table that [the Progressive Conservatives] kept with them during the change in government,” said Quaiff. “He’s been to Sophiasburgh, been to the site, and they have a full understanding as to what’s going on.”

Quaiff said the delegation also addressed the issue of school consolidation, asking for a moratorium on closures and a revamp of the Accommodation Review Committee (ARC) process.

“She gave us her word that that would happen, that there would be a moratorium until they got more input,” he said. “We asked that the municipalities of Ontario be involved in providing some input as it has a big effect on our municipalities. She’s going to look into that as well.”

Segueing from the school closure conversation, the delegation discussed the asking price for former school facilities that have been deemed surplus. Quaiff said taxpayers have basically paid for the buildings already.

“We asked that fair market value be considered,” he said.

Here in Prince Edward County, the school sites have been targeted for affordable housing initiatives. Quaiff said this was also discussed, with the delegation suggesting municipalities should be at the top of the list when it comes to parties expressing an interest in the properties.

With multiple schools in the municipality in the process of being consolidated, construction is being undertaken at PECI to accommodate the additional students. Quaiff said that construction is not yet completed and some parents have expressed concerns.

“[We discussed] the possibility of leaving Queen Elizabeth open until the construction is completed,” he said.

While Quaiff said the minister noted the information, no word was given as to whether that’s a real possibility.

On Tuesday morning, the County delegation met with Parliamentary Assistant to the Minister of Infrastructure and King-Vaughan MPP Stephen Lecce. County representatives expressed the need for a reliable, sustainable source of revenue that municipalities can count on. Such funding is critical to planning infrastructure projects, Quaiff said. County Rd. 49, water and wastewater, and funding for affordable housing were also discussed.

“We had a pretty good conversation and, at the end of the day, I feel pretty confident that we were listened to,” Quaiff said.

The County may have one future source of revenue in Airbnb. There continues to be discussion around a potential levy of four to seven per cent that could be collected by the short-term accommodation company and distributed to municipalities. Quaiff said that funding could be directed toward infrastructure.

“It doesn’t have to go specifically into the tourism sector where it comes from,” he said.

The municipality has concluded there are 660 short-term accommodation rentals in Prince Edward County. Quaiff said Airbnb confirmed this week that there are 580 listings registered with the company.

As for a when such a levy could come into effect, Quaiff said there’s no concrete timeline at this point. County chief administrative officer James Hepburn and director of finance Amanda Carter attended the meetings and Quaiff said staff will continue to discuss the issue.

Lastly, with cannabis set to be legalized on Oct. 17 this year, Quaiff said the county delegation discussed the topic with fellow municipal representatives. The province has indicated no municipality will be forced to have a cannabis store. Quaiff said legalization is an issue council will have to discuss in the near term.

“We’re certainly going to make sure that gets put on the agenda somewhere so we can start that conversation,” he said.