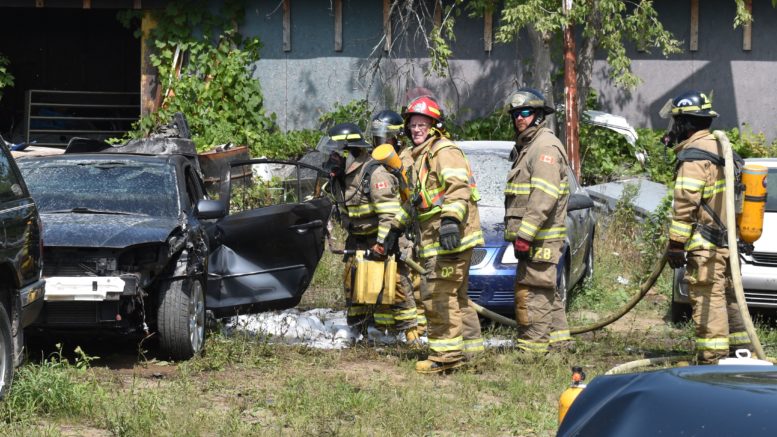 HOT WHEELS- Prince Edward County Fire and Rescue were called to the scene of a car fire at a local automobile salvage yard Monday. Cause of the fire had yet to be determined. (Jason Parks/Gazette Staff)

To say Prince Edward County Firefighters were on familiar terrain on Monday afternoon is an understatement.

Crews from Station One were called to Shantz Towing on Lake street at 12:45 p.m. To respond to a car fire in the automobile salvage area of the local business.

Crews quickly limited the blaze to the single vehicle that was found to be on fire and ensured the rest of the vehicles did not become involved.

Deputy Fire Chief Robert Rutter reported that a total of 16 firefighters responded to the scene and there were no injuries.

The site of Monday’s call wasn’t an unknown to firefighters thanks to the fact that a number of stations conduct regular extrication training sessions at Shantz’s.

“(Shantz’s) are very good corporate citizens and allow us to have regular training nights with our extraction equipment,” Rutter added. “It’s kind of ironic to get a call to a location that our guys would be very familiar with.”

Rutter added that the cause of the blaze is undetermined at this time.