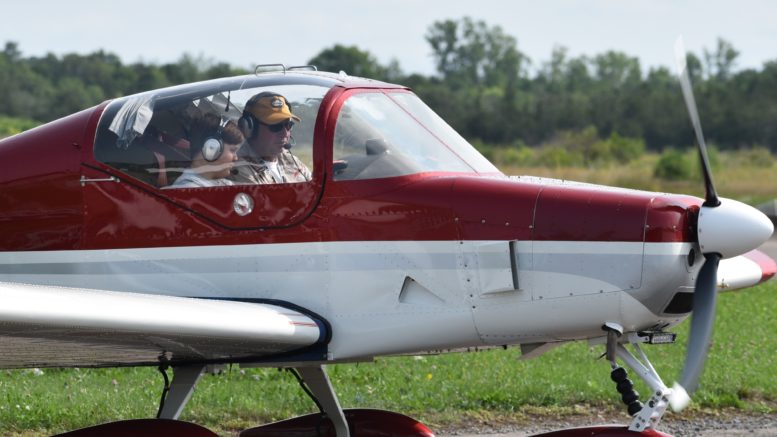 UP, UP AND AWAY- Local pilot Jeff Douglass prepares to take a COPA for Kids participant into the wild blue yonder Saturday morning. (Jason Parks/Gazette Staff)

A free program that introduces young people to the joy of flight and the world of general aviation through the efforts of volunteer pilots has been a late-summer hit amongst local youth for half a dozen years.

Organizers were enthused by Saturday’s turnout that featured a pair of morning sessions and five aircraft.

“It was another great turnout and we had 27 children between the ages of 8 and 17 take part this year,” PEFC member Jackie Douglass told the Gazette. “I don’t know who gets more excited, our pilots or the kids taking part in the program.”

The handful of pilots donate their time, conducting a short ground school at the Flying Club quarters at the Picton Airport, teaching the young people about the basics of flight, safe entry and exit procedures and inflight procedures.

After that session, participants take to the skies for a short, 10-15 minute flight over Prince Edward County.

Some of the children couldn’t wait to go flying with an experienced pilot while others, like any first time flier, had some trepidation.

“We had one young person come in this year and they were certainly nervous in the ground school,” Douglass explained. “But after they came back from the flight they were all smiles and gave us all first bumps.”

Douglass wished to thank Loch Sloy and site manager Jackie Burley for registration intake and volunteers who helped organize participants prior to the ground school and post-flight.

“Considering the great turnout, we will likely be running the program again next summer and will be advertising the intake through traditional and social media some time in late June or early July,” Douglass added.