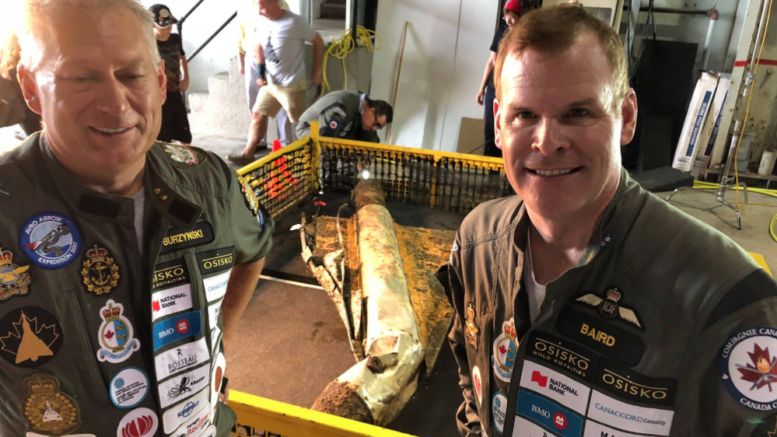 A valuable piece of Canadian aviation history was brought from the depths off Prince Edward County earlier this month.

The first tangible evidence of the iconic Avro Arrow test program launched from the shores of Point Petre in the 1950s has been salvaged from the floor of Lake Ontario by the Raise the Arrow crew earlier this month and was delivered safely to CFB Trenton Monday, Aug. 13.

The item recovered is not one of the final one-eighth scale Avro Arrow models Osisko Mining President and CEO John Burzynski’s team has been searching for since last July but a precursor to the Arrow project.

Burzynski told the media Friday at an unveiling at the 8 Wing that when the Raise the Arrow group found the target late last summer, explorers were unsure exactly what they were looking at. 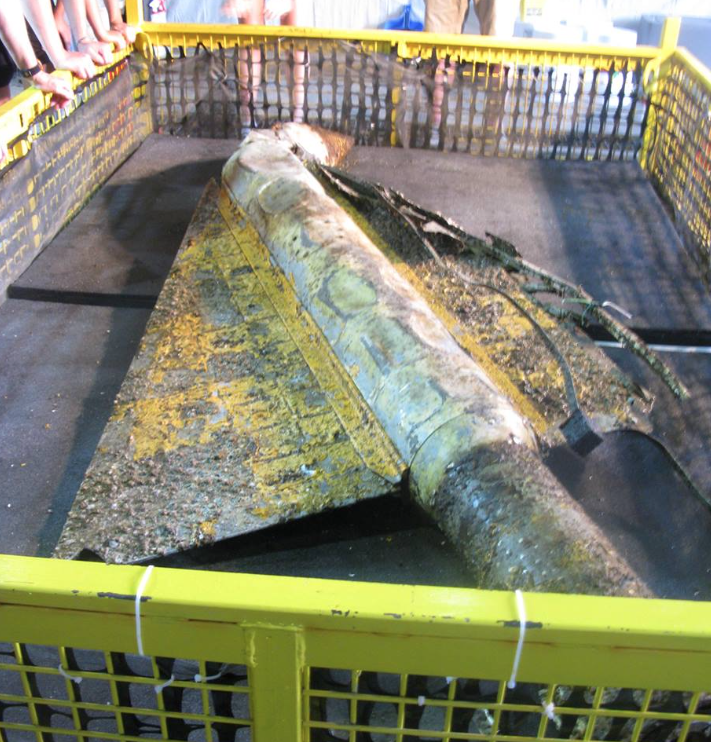 A delta wing test vehicle fired from Point Petre in 1953 and recovered from Lake Ontario earlier this month. (Raise the Arrow photo)

“We knew it was part of the Arrow project, we just weren’t sure what part,” Burzynski said.

It turns out, the item is a progenitor of the Arrow program.

The discovery is being called a ‘delta wing test vehicle’ that was an early design that helped develop the Arrow aircraft.

A total of three of these one-eighth scale delta wing models were fired from Prince Edward County and above Lake Ontario to show designers and engineers what the wing would do when pushed to a rate of mach 1.5 or 2.

Based on the results that were delivered via radio telemetry from the models, the tender for the full design of a delta wing interceptor was developed.

“This is the grandfather of the Avro Arrow program,” Burzynski added.

The model, which has been resting on the lake bed for some 64 years, shows significant nose damage from when it entered Lake Ontario at an estimated 4-500 miles per hour.

After being carefully lifted from the lake depths with the assistance of a commercial dive team, researchers noted that the model had a slot for a tail fin.

Burzynski’s team has researched some newly discovered files this past winter and those documents have assisted Raise the Arrow in making some determinations as to the details surrounding this latest discovery of a delta test vehicle.

The find was expected to be shipped to Ottawa on Monday for further examination and conservation.

In total, searchers believe there were 20 models of varying developed states fired from Prince Edward County into Lake Ontario and this discovery marks the first recovery of those models.

“This is a really important discovery” said Burzynski.

And while this discovery and recovery has energized the Raise the Arrow team, there are still some significant targets to be identified and eventually recovered to fulfil the mission.

The last five models fired into Lake Ontario in the mid-1950’s were part of a free-flight program test and were exact, identical replicas to the full scale Avro Arrow model that was produced and tested in 1958.

Those are the prime targets the Raise the Arrow project leaders are yearning to discover and bring to the surface.

Given the amount of historic military activity and shipping traffic in the area of Point Petre and all points west, finding artifacts and items on the Lake Ontario floor hasn’t been a problem for the Raise the Arrow crew.

“It’s been like searching for a needle in a haystack full of needles,” Burzynski quipped. “We’ve found lots of the things. It’s a matter of finding the right thing.”