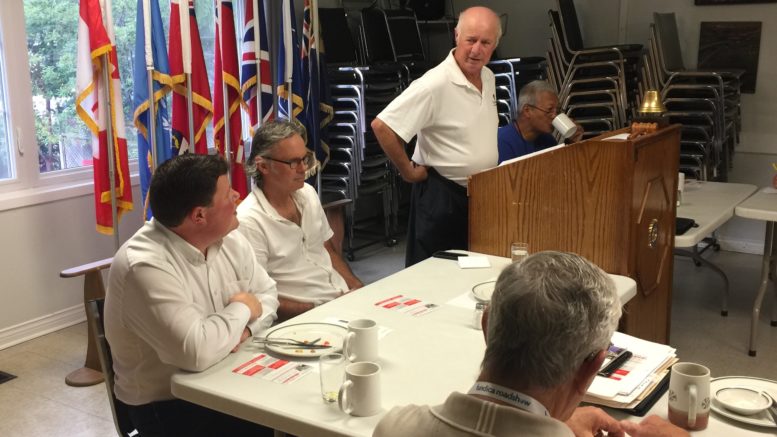 Questions about how to address short term accommodations, infrastructure concerns and traffic congestion were on the menu Tuesday as the Rotary Club of Wellington kicked off the all-candidates meeting season in Prince Edward County at their weekly breakfast gathering.

Incumbent Jim Dunlop and challengers Mike Harper and Brent Kleinsteuber were joined by a cross section of Rotarians and interested business leaders to discuss the course charted by Prince Edward County council in recent years and what issues facing Wellington needed to be addressed in the coming term.

Dunlop said the village was on track to have infrastructure improvements including water line upgrades which would positively impact both the village and the Wellington-on-the-Lake.

If we make improvements in the village, it will have positive impact on Wellington on the Lake as well,” Dunlop said. “If we don’t do it, development will stop.”

An close examination and a potential mitigation strategy to the Airbnb boom will commence further this fall and work on the wall at the Wellington Park getting completed in the near future are two items of interested for the longtime Wellington councillor.

As a resident of the village for nearly 50 years, Dunlop said parking in the downtown core has typically not been problematic between Monday and Thursday.

But come Friday and drivers will struggle to find a spot to park.

Or even navigate the streets in a quick manner.

“The streets in Wellington were made for horse and buggy so we need to have a look at what we can do to ease congestion and get more parking,” the councillor added.

Kleinsteuber is one of the younger candidates running in the upcoming municipal election but his age has not kept him inactive in the community.

Regularly volunteering with a number of initiatives including the Wellington Recreation Committee, Wellington Museum and the As One That Serves (AOTS) group, Kleinsteuber said he firmly believes in public service and helping your neighbour.

It was Kleinsteuber’s view that Wellington was in need of water infrastructure updates and that the overwhelming success of tourism in the village brought its own concerns.

Born and raised in village, Kleinsteuber said congestion on the village streets in the summer time was an issue and the Wellington native was an advocate for another cross walk on Main Street.

and added some of the questionable decisions council has made was motivation to toss his hat into the municipal ring.

The demolition of the Methodist Church, the unwarranted rehabilitation of Union road improvement and the handling of the convenience store property on the corner of Main and Wharf Streets were just some of the issues where council failed in Harper’s opinion.

“The idea of putting a parkette and parking spaces at the main intersection of wellington is not going to solve any of the parking problems we have here,” Harper said.

It used to be Wellington was a working town that was tourist-friendly,” Harper said. “Now we are a tourist town that isn’t so friendly to the locals.”