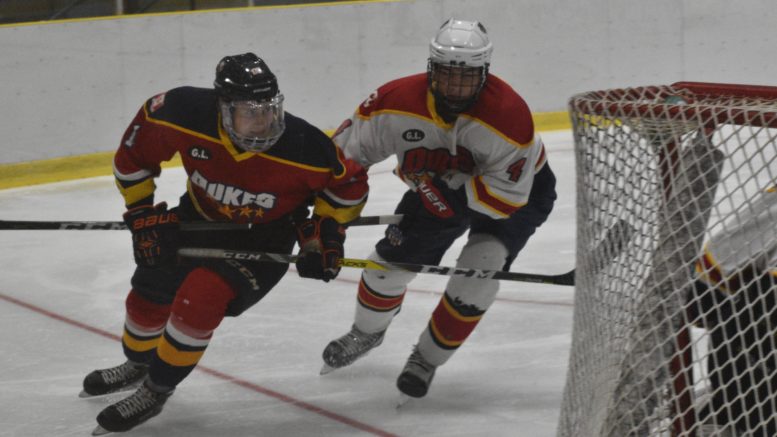 The Wellington Dukes got their abbreviated four game preseason schedule off on the right foot Wednesday, holding the host Trenton Golden Hawks off the scoreboard until the very end of the hockey game.

Up 5-0 with under 20 seconds left in the contest, Wellington appeared to be closing in on a shutout when a Tyler Iggnzitto shot got through Dukes netminder Danick Francoer at the 19:47 mark of the final frame.

Until that point, Francoer and Ethan Taylor had kept the Golden Hawks off the scoreboard after splitting the contest.

In a well balanced attack, Wellington got goals from five different scorers.

A relatively rookie-laden lineup, Wellington dressed Nelson Powers and Dawson Ellis and the pair were the only returnees from last season’s Buckland Cup winning team.

Dalton Bancroft got Wellington on the board in the last five minutes of the first with an unassisted marker but the Dukes were able to double that lead before the close of the stanza when Adam Usinger fed Kennan Eddy with just 32 seconds left to make it 2-0 for the visitors.

Eddy, a Duncan, BC native, came to Wellington’s training camp by way of the Victoria Island Junior Hockey League and had a strong weekend during inter-squad competition. 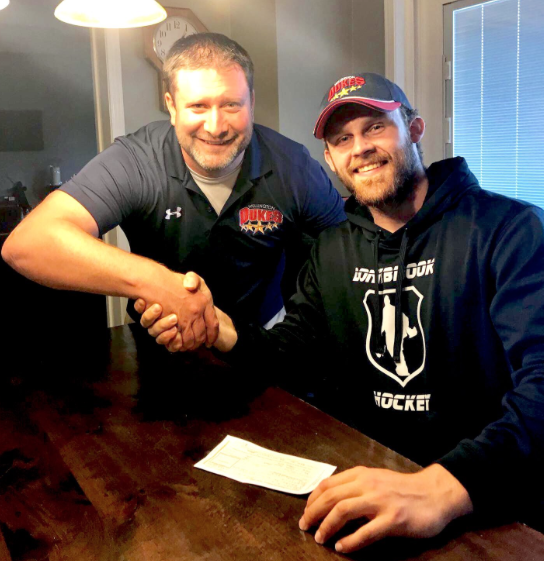 In the second period’s only scoring play, Bancroft set up Quinte AAA grad Jacob Vreugdenhill at 5:02 to increase Wellington’s lead to a field goal.

In the third, Usinger picked up his second point of the contest when Tyson Gilmour put the puck past Trenton netminder Nick Althaus at 11:52.

Under a minute later, defenceman Brett Humberstone sprung Nate Boomhower who made it a 5-0 spread for Wellington.

The club will look to build off its road win when it hosts Kingston on Friday evening at Lehigh Arena.

Leads at Lehigh:While the team was on the ice, General Manager Todd Reid was putting the finishing touches on master stroke off the ice. The club announced Wednesday evening it had signed alumnus netminder Olivier LaFreniere. Ollie-the-Goalie last played for the Dukes in 2015-16 before embarking on an OHL sojourn with Ottawa and most recently Owen Sound. Last season in the OHL playoffs, LaFreniere was a star for the Attack who nearly orchestrated a major upset of the top-ranked Sault Ste. Marie Greyhounds. Including playoffs, LaFreniere has 84 Major Junior games to his credit over the last two seasons.