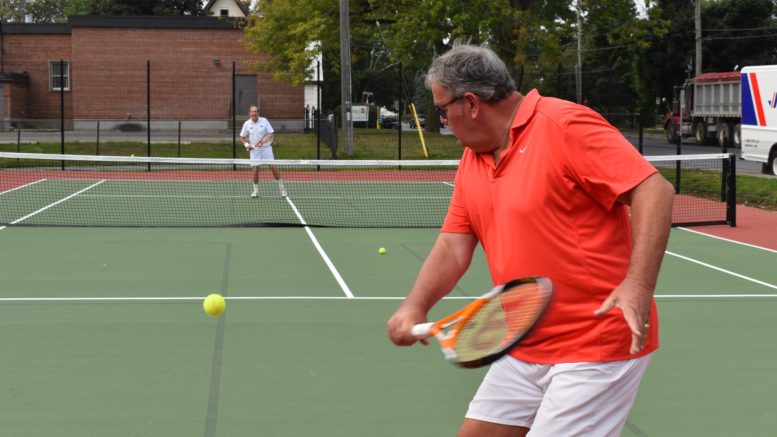 SERVING UP SUPPORT- Herb Pliwischkies returns a volley from Canadian Tennis Hall of Fame inductee John Beddington at the newly refurbished Benson Park tennis court on Monday. Pliwischkies, with the support of Beddington and others, is championing a local youth tennis program next spring. (Jason Parks/Gazette Staff)

The county’s ‘Mr. Tennis’, Herb Pliwischkies rallied with Canadian Tennis Hall of Famer John Beddington as part of announcing a new youth tennis program to be launched in the spring of 2019.

Beddington, a part time Prince Edward County resident and organizer and builder of the Canadian Open (now known as the Rogers Cup) from the late 1970’s until 1995 is, along with Pliwischkies, supporting a local grass roots program to get more rackets and tennis balls in the hands of local young people in an effort to develop the sport locally. 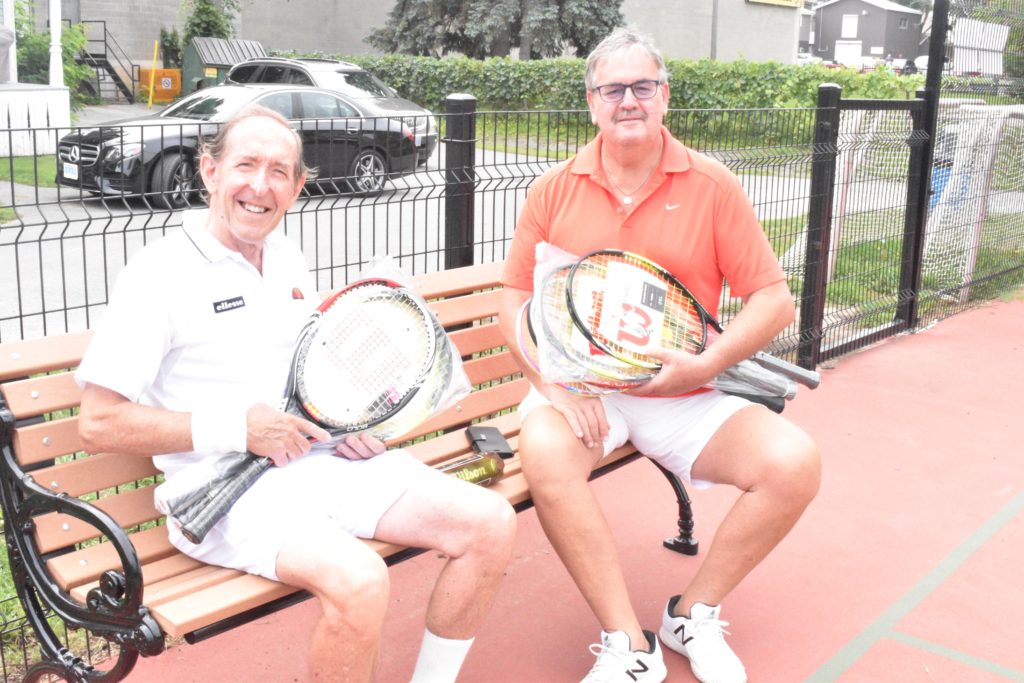 And with newly resurfaced courts in Picton, Bloomfield and Wellington, the time has never been better to encourage young people to develop a backhand, learn to lob and break a serve.

“This program is being developed through John’s affiliation with the International Lawn Tennis Association and through the support of ReMax, myself and a few other sponsors and supporters,” Pliwischkies explained.

The local real estate agent plans to bring an Ontario Tennis Association pro to Prince Edward County next spring and offer free introductory lessons to young people of all ages.

And equipment is no concern as Pliwischkies always has a good selection of rackets ready to hand out to anyone that be in need.

“I see kids at the court with a racket missing strings or all chewed up and I hand them new racket and say ‘Try this’,” Pliwischkies said. “We’ve got great people behind this initiative that really want to see the kids take up the sport.”

Pliwischkies had considered getting the program started this summer but the timeline of the court refurbishments and the height of the summer heat didn’t make for opportune conditions.

Pliwischkies added that the touring pro would be available for adult lessons on a per-pay basis as well.

“We are really excited to have these newly refurbished courts spread out in the county and what they will mean for the growth of tennis here locally,” Pliwischkies said.

Beddington has had a residence in Prince Edward County since his retirement from the position of Executive Vice-President of Tennis Canada in 1995.

It was during Beddington’s tenure that the Canadian Open developed from a mid-level clay tournament into a major hardcourt stop on the Association of Tennis Professionals (ATP) and Women’s Tennis Association (WTA) tours.

Not only an increase in prize money for the international showdowns and expansion of the event to Montreal was seen under Beddington’s time as chair of the Canadian Open but also a funding stream to local and community tennis organizations was realized, a fact the Checkendon, Oxfordshire UK native is proud of.

“Before (1978), there had been no money really to help the development of tennis throughout Canada and now of course tennis has grown exponentially from there,” Beddington said.

One only needs to look at today’s Canadian stars of tennis including Milos Roanic, Vasek Pospisil and Genie Bouchard as home grown talents that were encouraged as young people to pick up a racket and learn the rules of tennis as proof that grass roots development programs have influence.

In addition to youth programming, Pliwischkies also unveiled a set of court-side benches on Monday and with one of the benches including a memorial to local players of note who have passed away.

The memories of Clancy Bond, Steven Strong, Simon Vincent and Lindsey Ward are remembered as well as top Wellington players and past champions Harry MacDonald and Frank Hardy.

Other court improvements planned for the future at the Benson Park court is the installation of lights.

“It won’t happen this year but lighting is definitely something we are working towards,” Pliwischkies added.