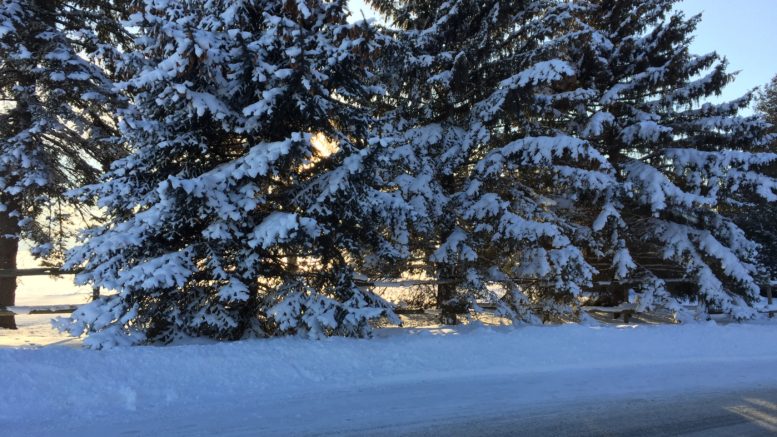 A CHILLING THOUGHT- Sun shines through a stand of evergreen trees and onto a freshly plowed County Rd. 12 after a winter storm in late 2017. (Jason Parks/Gazette Staff)

It would probably serve the members of County council a dose of cold comfort to know that on the day they hacked up a motion for their upcoming winter maintenance contract, Jackson’s Hole, Wyoming had just received its first blast of snow in advance of the 2018-2019 skiing season.

Yes, despite the recent stifling humidity, winter is on its way.

And Prince Edward County has less than half its priority routes contracted for snow plowing when the white stuff inevitably starts flying in late November.

County Council balked at a severe and long-term hike in its winter road maintenance program Tuesday evening, choosing to award four winter plow routes to QBT Excavating for an eight year term at an annual cost of $497,800 and cancelling the rest of the tender.

Council then passed a motion that staff be directed to negotiate with Drew Harrison Haulage Limited and report back to council bearing in mind the overall relationship of the proposed contractor and the corporation.

In an unorthodox gambit, it appears council is directing staff to remind a regularly utilized contractor of their mutually beneficial relationship and that a drastic cost increase for a service over the long term was an untenable potion for county government.

Tuesday’s nights council calisthenics, which took over an hour to complete, came as a result of a single tender being submitted after a pair of winter road maintenance contracts expired this past spring.

Previously, R.R. Byford and Drew Harrison Haulage provided plowing, sanding and salting services on main roads in Prince Edward County that required winter service level 1 (most frequent) and these services were afforded to the municipality on a four year term.

By the close of the tender period in July, Drew Harrison Haulage Limited was the only submitted tender and the bid came in at an initial cost of $671 per hour standby and $671 hourly although those rates were reduced to $500 hourly after staff met with the service provider and negotiated further.

Still unhappy with the proposed rate, staff sought an alternative and found Brighton’s QBT Excavating Services had four trucks and were willing to take four of the County’s ten routes at a cost of $200 per vehicle per day standby and $225 per hour operated per season at an eight year term.

The remaining six routes that were proposed to go to Drew Harrison Haulage Limited would have cost the County $1.71 million, and, combined with the QBT contract, would have added up to $2.207 million.

Considering the entire County of Prince Edward 2018-19 winter control budget is $2.850 million and there are many other routes to clear and plow, the tender gave both staff and council reason to pause on Tuesday evening.

In explaining the report and motion before council Tuesday, Commissioner of Engineering, Development and Works Robert McAuley said the Municipality simply couldn’t walk away from contracting out these remaining level one priority routes as the county lacked the internal capacity.

“We don’t have the staff to do it even with our winter hires and we would have to take trucks off other routes,” McAuley said.

Doing so would lead to serious lag time of snow plowing that could lead to highly travelled routes being plowed days after a winter storm event.

And simply purchasing new trucks in time for the winter driving season isn’t an option either Macauley said.

“We tried to rent them, we tried to borrow them, we tried to buy them. We can’t do it and it’s a $3 million investment to buy ten trucks,” McAuley told council, adding it typically takes a year to order and then outfit the trucks for winter matintence duties.

The commissioner mentioned that part of the agreement put before bidders this summer was that the fleet of trucks couldn’t contain a vehicle less than ten years old however McAuley didn’t feel this was the reason for the high amount and called the practice of having newer vehicles doing winter maintenance standard.

“After ten years, the trucks run as much as they don’t,” McAuley said.

In the long term, the municipality appears to want to get back to providing most-if-not-all of its own winter road maintenance and McAuley alluded to a plan being developed for council that provides an in-depth business case.

In the broad strokes McAuley said the municipality could start buying trucks and hiring drivers over an eight year period and ramp up the internal snow plow operations.

For a municipal government that has been at times loath to address County-owned vehicles, McAuley said the silver lining was more large dump trucks and manpower could offer an enhanced summer road surface treatment schedule and double the amount of road work being done in the summer time.

But regardless of whatever course the county charts, it seems the municipality will be priced out of the contracted winter road maintenance practice.

“Clearly, if this is the way the market is going, we can’t sustain this. It’s not fathomable at these prices,” McAuley added.

As its senior member, councillor Kevin Gale was able to recall the days of township amalgamation and when the municipality started to contract its snow plowing as a cost consideration in light of an inherited fleet of trucks complete with a number of what Gale described as “junkers.”

But other municipalities had undertaken a similar track in earlier times by contracting their snow plowing services and selling off their equipment.

Gale mentioned the City of London in particular as a municipality that lost its ability to deal with snow removal and found themselves at the mercy of contractors who knew the situation and could extoll any price on the government.

“They had to get back into the business and it wound up costing them an arm and a leg,” Gale said. “This (motion) is unacceptable and I think we have re tender or do something.”

Gale also asked CAO James Hepburn what the hit of the motion as presented would mean to tax payers and the answer was a ball park figure of four per cent increase on top of the annual tax bill.

While the motion to awarded four routes to QBT and negotiate further with Drew Harrison Haulage Limited passed, some members of council still voiced their displeasure of how the tender process was handled by staff in this instance.

Councillor Brad Nieman felt that sourcing another service provider after the tender had closed was “unethical” and pressed McAuley if it was normal practice.

“Am I right to assume that there are no bidders after a tender closes?” Nieman asked the commissioner.

“Generally that’s correct but there was only one bidder,” McAuley said. “We told (Drew Harrison Haulage) point blank we have a difficult time going forward with these prices and it wouldn’t be supported.”

“It’s unorthodox but we were above board and advised the only bidder that we were going to entertain a second quote,” McAuley added.

Councillor Roy Pennell echoed those sentiments and wondered, in light of these actions, could the County continue to follow the tender process in the future.

“When that word gets out on the street, contractors are going to ask ‘Why should I tender anything?’ I’ll just wait till it gets awards and try a better deal. And that makes us look bad as a municipality,” Pennell said.

Councillor Jamie Forrester took umbrage not only with the increase in costs but also with the length of the contracts being negotiated and, at an eight year term, the current council was tying the hands of two future Prince Edward County governments.

“I would never put that on to another council-two councils actually. This is totally unacceptable and where are we going to come up with this money?” Forrester wondered.

Quaiff said the tender went out as per the County’s procurement process and came back with one solitary tender at a 330 per cent increase over the previous year.

“I think staff did their job by getting in touch with that contractor and saying ‘We have a problem’,” Quaiff said.

Calling other regions for possible loans or plow service sharing, attempting to source equipment and ferreting potential service providers and renegotiating terms were all attempted by staff with varying levels of success.

“It’s not their fault they were unsuccessful,” Quaiff said. “Can you imagine what the conversation would have been like tonight if had they not contacted QBT and found alternatives and not negotiated?”

In other council news, the motion made be the Committee of the Whole earlier this month to engage the volunteer group planning to refurbish the Millennium Trail was approved but not before being amended.

Councillor Maynard, concerned that the Prince Edward County Snowmobile club would not have representation on the ad hoc committee dedicated to a trail that was vital to their winter time enjoyment, motioned that a member of the club be added to the working group.

Councillor Forrester seconded the motion but quickly withdrew support after Councillor Jim Dunlop announced he was opposed because an inclusion of a special interest group member at this stage might lead to other groups coming forward and cause the group to balloon and get away from its original mandate.

A visibly upset Forrester said the local snowmobile club had brushed and maintained the trail and built connecting bridges “long before anyone cared about the trail” and would continue to do so with our without a member on the ad hoc committee.

The motion carried to add a Snowmobile Club member to the committee.