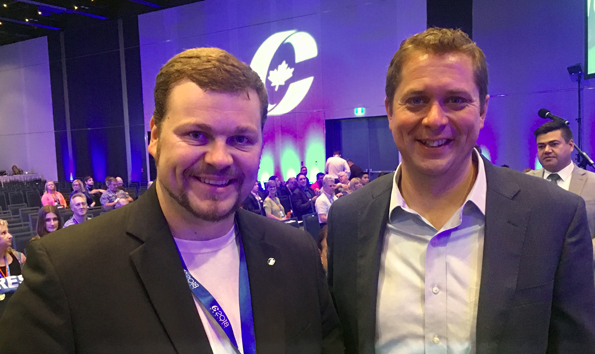 With a federal election ahead next year, Bay of Quinte candidate Tim Durkin returned from this weekend’s Conservative convention upbeat about the way the party worked to adopt policy positions.

“One of the good things about the Conservatives is they are a big tent party, and even though there are many diverse opinions, all discussion was done with respect for differences of opinion,’ the Belleville radio broadcaster said.

Durkin said members discussed a wide range of issues from social policy, to the economy, to immigration and energy.

“It was a really great experience as we head into the 2019 election,” Durkin said.

“Working toward getting natural resources to market so we are not relying on importing from other companies, eliminating penalties for charities or faith groups who hold certain values and beliefs, and looking at free trade will be a focus,” Durkin said in a release.

The convention featured a keynote speech by party leader Andrew Scheer, who offered his vision for a Canada governed by the Conservatives, which he summed up as a country where “taxes are low, government is limited, opportunity is unlimited, freedom is shared, and people are put before government.”

A big story related to the convention was the announcement by Scheer’s leadership rival Maxime Bernier that he intended to leave the party and start his own with an intention to run in the 2019 election.

“Although there is still more than a year before the next federal election, Canada’s Conservatives are a united party, an excited party, and a party that brings a positive option to Canadians. The focus will be policy, not personal.”