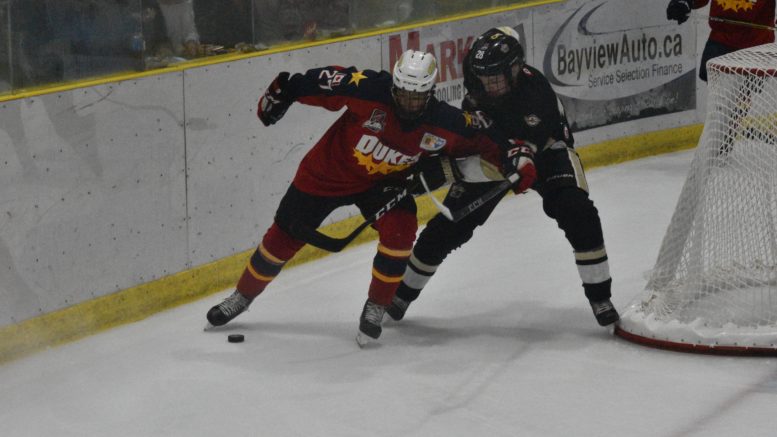 ANY MEANS NECESSARY -Wellington Dukes forward Elijah Gonsalves tries to move the puck with his skate while being held up by Trenton Golden Hawk defender Chris Tamer. Gonsalves had the game-wining goal in a 4-2 Wellington win. (Jason Parks/Gazette Staff)

An old, familiar modus operandi crept into the Wellington Dukes playbook Wednesday as they downed the visiting Trenton Golden Hawks 4-2 to pick the local’s third preseason win in as many games.

It wasn’t any particular system of forecheck or a productive powerplay scheme.

No, it was a slow start to the contest that the Dukes put on display for the 400 or so paying patrons that flocked to Lehigh Arena to see the back end of a home-and-home exhibition set with the Quinte area rivals.

As was the case the in many regular season games last year, Wellington had a tough time finding top gear Wednesday, getting badly outplayed in the first period and falling behind 2-0 before the end of the opening frame.

Outshot in the first 20-11, Trenton would open the scoring at the 10:09 mark when Steven Elliot was able to skate to the front of the Wellington net on a nice wrap around attempt and tuck the puck behind Dukes starter Danick Francoer.

The lead was doubled just over six minutes later when Tiger McDonald made a nice seam pass to Paul O’Doherty on a Trenton powerplay.

Francoer, who had bit on a fake shot attempt and had a Golden Hawk floating in his crease, couldn’t make back to the far post in time and it was a two goal margin at the end of 20 minutes.

In the second, Wellington started to stir and hem the visitors in their own end for periods of time. 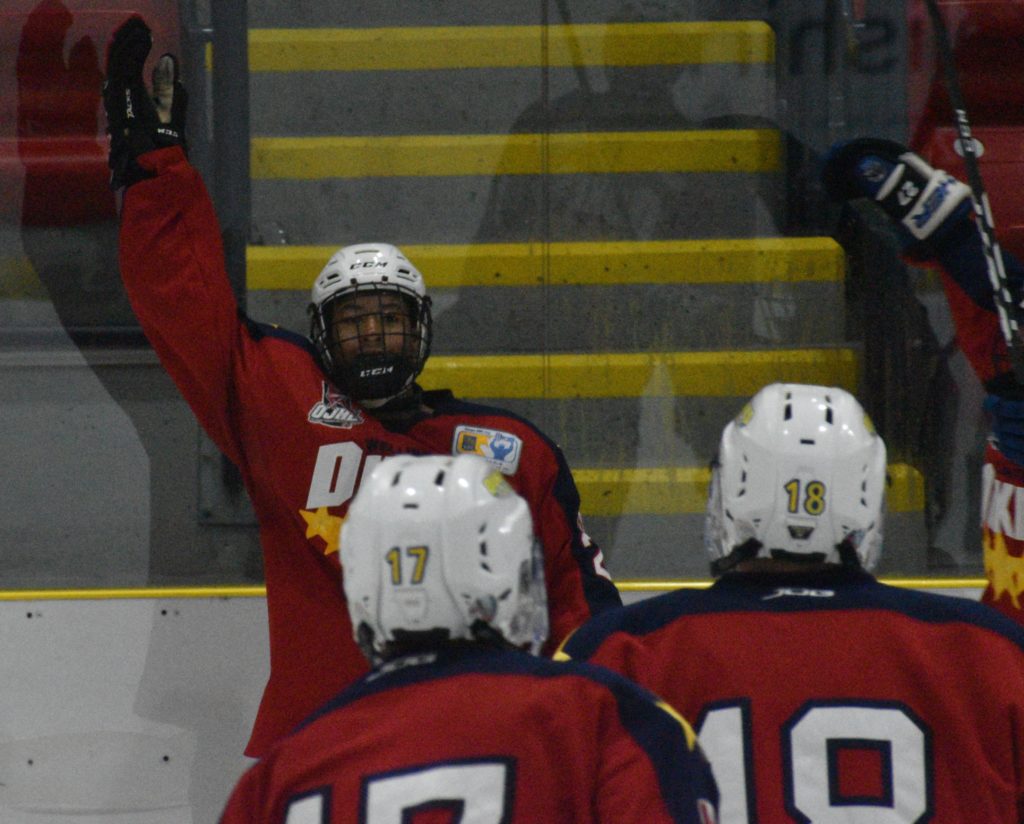 Frank Vitucci was able to pounce on a loose puck at the side of the Trenton net and stuff a backhand past Althaus at 10:27 to get Wellington on the board.

The Dukes had plenty of good looks at the Golden Hawks net in the last ten minutes of the second including a number of open net opportunities but couldn’t bury.

Then, just as the frame was expiring, Wellington struck with a buzzer beater.

It was Vitucci driving to the net with the puck and delivering a shot that Althaus couldn’t handle.

Keenan Eddy was on the door step and able to knife home the loose puck with 2.6 seconds left to make it a new game when the clubs emerged for the third.

Wellington didn’t relent in the third and had a number of good forays into the Trenton Golden Hawks zone.

Finally, the Trenton dam broke for the Dukes and it was Elijah Gonsalves finding a home in the back of the net at 13:44 off a nice individual effort.

The line of Gonsalves, Madoka Suzuki and Dan Panetta gave the Golden Hawks fits down low as the trio simply got stronger and stronger as the game progressed, beating Trenton defenders to pucks time and again.

The Wellington lead was doubled under two minutes later when Nick Abbot took a Brett Humberstone feed and clanked a shot off the pipe and into the Trenton net at 15:04 to make the final 4-2.

Francoer made 11 stops in the third including a few nice saves but the young Wellington defensive corps did a good job of keeping the attackers to the outside of the prime scoring areas in the second and third periods.

Wellington will close out its preseason schedule on Friday night as they host the Cobourg Cougars for a 7:30 p.m. Puck drop.

Leads at Lehigh: Panetta decided to check out the Peterborough Petes main camp earlier this week but was back in Wellington within the 48 hour window that preserved his NCAA eligibility and his commitment to Colgate University…Andrew Rinaldi was one of a few regulars held out Wellington’s lineup on Wednesday…Dalton Bancroft was not among the players retained by the Saginaw Spirit after the first round of cuts so it’s expected the right winger will be back in Wellington in time for Friday night’s game…Forward Jacob Vreugendhill and defenceman Jonathon Harrison were still trying out for Niagara as of Thursday morning although a decision from Ice Dogs management was expected by the end of the day…Ethan Taylor was on the bubble at the Sault Ste. Marie Greyhounds camp but the speculation is that the Hounds might try and trade star netminder and Quinte AAA grad Matthew Villalta prior to the Jan. 10 deadline if the club isn’t in the thick of the playoff race. That could lead to a mid-season call up if Taylor impresses the Hounds. Wellington could sign Taylor to back up Olivier LaFreniere but that would mean the Dukes would have to spend a 16-year-old card on a netminder…With Zach Uens as the lone returnee on the blue line, the Dukes might have to look for a trade at some point in the next month in order to address their lack of experience on defence.